UK’s Financial Times: “The test showed that China had made astounding progress on hypersonic weapons and was far more advanced than US officials realised.” 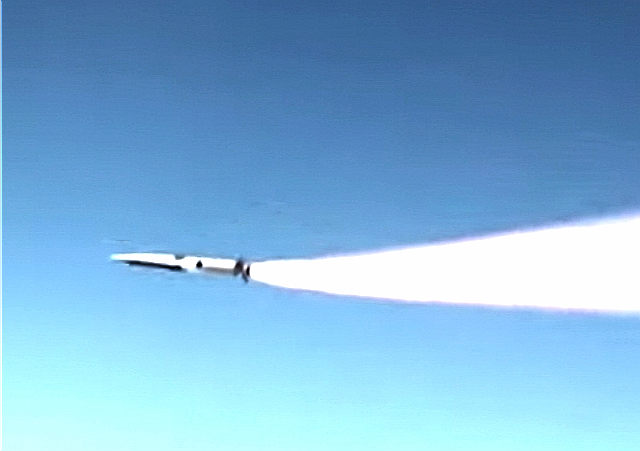 China secretly tested a nuclear-capable hypersonic missile, the London-based Financial Times reported. The report said that the missile, which adds a new capability to the Chinese arsenal, “flew through low-orbit space” and may be able to “negate” the U.S. missile defense systems.

“China tested a nuclear-capable hypersonic missile in August that circled the globe before speeding towards its target, demonstrating an advanced space capability that caught U.S. intelligence by surprise,” the newspaper added.

The report late on Saturday said the Chinese military launched a rocket carrying a hypersonic glide vehicle that flew through low-orbit space, circling the globe before cruising towards its target, which it missed by about two dozen miles.

“The test showed that China had made astounding progress on hypersonic weapons and was far more advanced than US officials realised,” the report said, citing people briefed on the intelligence.

China’s ministry of defence did not immediately respond to a faxed request for comment from Reuters on Sunday.

Hypersonic missiles are faster, more maneuverable, and harder to detect compared to conventional missile systems. “Hypersonic missiles are much faster and more agile than normal ones, meaning they are more difficult to intercept,” the BBC explained. “They can fly at more than five times the speed of sound and, much like ballistic missiles, can deliver a nuclear warhead,” the broadcaster added.

While the Chinese official denied testing a hypersonic missile, the Chinese state-media taunted the U.S. as it bragged about Beijing’s growing cutting-edge military capabilities. The “U.S. should stop eyeing too much on China’s hypersonic missiles and broaden its horizons,” the Communist Party-run Global Times declared on Sunday.

Besides China, other rogue regimes are also joining the race to acquire hypersonic missile technology. In recent months, Russia and North Korea have also tested their versions of hypersonic weapons. Last month, North Korea said that it had successfully launched a hypersonic missile. In July, Russia reportedly test-fired a similar missile from a submarine.

Former President Donald Trump repeatedly stressed the need to develop a hypersonic missile to match Beijing’s capabilities. The mainstream media, complacent about the Chinese threat, mocked the president for mispronouncing the missile as “hydrosonic” and describing it as “super duper” fast.

The New York Times even dismissed the technology as a hoax. “Hypersonic Superweapons Are a Mirage, New Analysis Says,” the newspaper reported in January.

Looks like we are headed for a Mine Shaft Gap!

Put Pete Butthead in charge of the military. And make Bradley Manning a general.

Yeah, that’ll do it.

What do our intelligence services actually do, is what I want to know.

They do the most important work any human being can ever do. They make try to make sure Donald Trump (or hopefully any other Republican) will never be elected president again.

What more can a civilized people ask?

From what I’ve heard and read they’re focused like a laser beam on investigating ‘domestic terrorism’.

Because The Regime alleges it is the greatest threat to our ‘precious democracy’.

The Chinese? They’re not diverse. Not at all. Not even a little. So they could hardly stand up to our ‘greatest strength’ — Diversity.

Our diverse Esprit de Corps will overcome all enemies and aggressors. What force could possibly stand-up to a military with our incredible diversity in genders, pronouns, hair styles, manicures, and makeup?

The French once thought their Esprit de Corps would be enough to overcome any German aggression. Ooops.

With the tight relationship Milley has with China surely he knew about this well in advance. Is it possible that he was present to observe the test alongside his buddies?

Asked by @AP’s @AJJaffe on China’s space nukes, Jen Psaki says she won’t be “comment[ing] on the specific report,” but claims the U.S. “welcome[s] stiff competition” from China though they “do not want that competition to veer into conflict.”

US intelligence agencies were caught flatfooted because they haven’t yet figured out how to incite conspiracies in China.

The CIA ia flatfooted because the majority of our human assets in Chinese govt are dead.. wholesale outing of agents has allowed China to fix its leaks. Now… how did they find all of those spies? Shagwell maybe or through The Big Guy… or McConnell?

The good news is we have been able to save money by reducing the number of our agents in China. And in exchange they have agreed to send more of their agents here. It’s a win win.

Or, do you know how, they just don’t want to.

Text to speech. I don’t like it. I said they likely know how, they just don’t want to.

Watt? And go up against the Germans?

I was thinking this is about war not sports. Pearl Harbor was a terrible sneak attack and very deadly to us. Not exactly a competition to see who’s best at sports.

Jen Paski and Kamala Harris are living proof of the old adage: be careful of what you wish for.

Yes, a credible denial if I ever saw one.

What observers saw was a flying bowl of bat soup. Nothing to see here.

What are the odds the Big Guy, possibly through Milley, asked them to say that. As a favor? One Marxist to another.

Maybe he even threw in a few of Hunter’s soon to be priceless paintings.

Since the is US tech you need to ask how they got it. You might remember a monster as SoS and her deals with a Russian group Skolkovo and the tech sharing she fostered.

That person sold space tech directly to the Chinese at the end of Mr. persons term as president. They are terrible people.

I’m sure Gen Milley got a heads up from his counterpart in China. They have at back channel where they exchange important information like this. Typical Chinese message is something like this: “Sum Ting Wong,” “Wi Tu Lo,” “Ho Lee Fuk,” “Bang Ding Ow.”

The USA is too busy making the world safe for abortion on demand, pussy hats, same-sex marriage, transgenderism, and suchlike to pay much attention to trifles like fortifying our grid, deterrence, anti-missile defense, etc. Further, from Henry Kissinger on, our leaders have put too much stock in the good faith of a Chinese regime that is made up in equal parts rankled nationalism, Marxist fanaticism, and jackboot militarism.

All the orbiting missles are the same speed unless gravity has changed.

No, it depends on their altitude.

Doesn’t even necessarily depend on the altitude – that simply sets the minimal vertical speed to attain that altitude, they aren’t actually reaching escape velocity, sub-orbital missiles can get massive speed by getting relatively high in the atmosphere, then applying lateral thrust and taking advantage of a curve around the Earth to get significantly higher speed than a normal missile, with much thinner atmosphere causing much less resistance and getting a gravity assist. It doesn’t orbit multiple times (doesn’t have the thrust for it), but a single partial sub-orbit lets it attain extremely high speed.

I learn a lot from reading your comments.

That’s… not how it works. Geosynchronous orbit is the only one that will have a constant speed because it requires you to maintain the same position relative to the earth. Everything else can and will have SIGNIFICANTLY different speed. It’s a MISSILE, not a satellite.

hardin doesn’t seem to know that gravity changes the further you move away from a massive object’s center of mass.

EXACTLY as I predicted months ago when the bullshit about Milley and Afghanistan happened.

The Chinese see a US military that is run by incompetent woke hacks that have no fucking idea how to win a war, and it’s making them bold.

They’ve MASSIVELY stepped up their intimidation of Taiwan, and now this.

I would honestly not be surprised if China starts actually seizing/blockading Taiwanese ships. I’d be surprised if they actually full-on attacked, as that would destroy anything of value they were trying to take, but it wouldn’t SHOCK me.

Biden and the woke joke US military are no longer a deterrent to China. They’re going to keep pushing until somebody stops them.

There may already be a Munich II deal. That Taiwan doesn’t know about yet.

Same excuse, too — reunite all ethnic Germans Chinese under one government.

Can’t let anything bad happen to all those semiconductor manufacturing facilities.

I imagine they’re not in the mood to trust anybody after what happened with Hong Kong.

I would assume that Taiwan has things in place to remove the semiconductor manufacturing from the equation if things go wrong. That would be one thing that they could do to reduce the chance of hostilities.

After we spend 5 or 10 trillion on “infrastructure” and socialism, how
much will we have left to counter the Chinese?

Written with sarcasm but I know what the facts on the ground will be in 10 years.

The Chinese “hypersonic missile” is really a maneuverable hypersonic re-entry vehicle. Actually, a hypersonic glider, while the US and Russia are trying to put an actual engine on the missile.