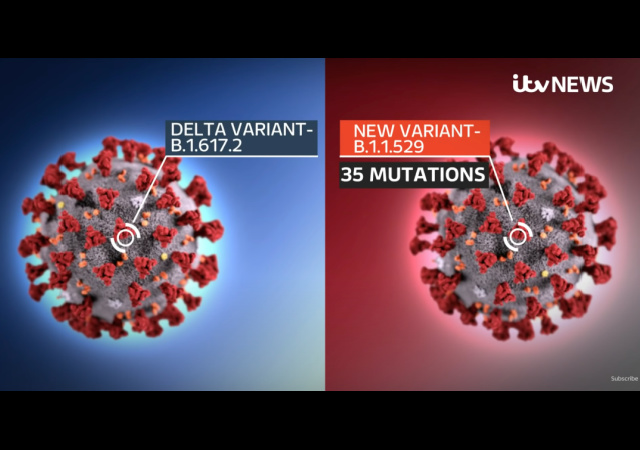 As the media spent the Thanksgiving weekend ginning up hysteria over the Omicron variant of the SArc-cOv-2 virus, the pathogen that causes COVID, the real news about the risk level has been slower to escape South Africa.

Dr Angelique Coetzee said she was first alerted to the possibility of a new variant when patients in her busy private practice in the capital Pretoria started to come in earlier this month with Covid-19 symptoms that did not make immediate sense.

They included young people of different backgrounds and ethnicities with intense fatigue and a six-year-old child with a very high pulse rate, she said. None suffered from a loss of taste or smell.

“Their symptoms were so different and so mild from those I had treated before,” said Dr Coetzee, a GP for 33 years who chairs the South African Medical Association alongside running her practice.

Coetzee provided an example of the severe cold/mild flu-like suite of symptoms she observed in one of the patients she treated.

“It actually started with a male patient who’s around the age of 33 … and he said to me that he’s just [been] extremely tired for the past few days and he’s got these body aches and pains with a bit of a headache,” she told the BBC.

The patient didn’t have a sore throat, she said, but more of a “scratchy throat” but no cough or loss of taste or smell — symptoms that have been associated with previous strains of the coronavirus.

Coetzee said she tested the male patient for Covid, and he was positive, as was his family, and then said she saw more patients that day presenting with the same kinds of symptoms that differed from the delta variant.

However, such a mild assessment won’t sell vaccines nor allow public health bureaucrats to savor power, influence, and media attention. For example, Dr. Anthony Fauci made the rounds on the Sunday talk shows, hinting that lockdowns could be on the horizon.

Americans need to be prepared to do “anything and everything” to fight the omicron Covid variant, U.S. infectious disease expert Dr. Anthony Fauci said Sunday.

Still, it’s “too early to say” whether lockdowns or new mandates will be appropriate, Fauci said on ABC’s “This Week.”

…“Inevitably, it will be here. The question is will we be prepared for it? If and when, and it’s going to be when, it comes here hopefully we will be ready for it,” Fauci added.

Biden is doubling down on everything that has failed to contain the virus already: Vaccinations, booster shots, and wearing masks in public places.

“This variant is a cause for concern, not a cause for panic,” Biden said. “We have more tools to fight the variant than we have ever had before.”

The calls for travel bans, such as the one implemented by Biden in the wake of the Omicron outbreak, are now being called “draconian” as many public officials are no longer accepting the current suite of failed COVID containment approaches.

South Africa’s health ministry on Friday attacked a global rush to impose travel bans to slow the spread of a new Covid variant as “draconian,” unscientific and contrary to WHO advice.

The new strain, named Omicron, has been blamed for a surge in cases in South Africa, but has already cropped up in Hong Kong, Belgium, Israel and Botswana.

“We believe that some of the reactions have been unjustified,” Health Minister Joe Phaahla told a news conference, accusing some leaders whom he did not name of seeking a “scapegoat.”

Went on vacation Thanksgiving week, watched/read/listened to no news. Normally I don’t watch or listen to news anyway. I will read a bit, only people I trust. But when you detach yourself to the idiots of the world, it’s fun to live a normal and happy life. I think I stopped caring about coronavirus in May 2020. I don’t know what it’s like to live in perpetual gloom and doom, but millions seems to relish it.

Not living in the same bubble as the sheeple, I am occasionally astonished by how opaque it is.

It’s one thing to twit my 103-yo mother about the fact that her TV news has yet to tell her about Fauci’s funding the development of COVID, or Hunter’s laptop over a year later. (Centenarians can be inattentive or forgetful, after all).

Today, I had my HS buddy in the Providence suburbs, very educated and talented commercial artist out of RISD, who manages an office full of designers, text me, “Who is this Brandon, anyway? Only Brandon I pay attention to is Brandon Bolton, Patriots running back…” Since we don’t align politically, I thought he was pulling my leg. Nope. He honestly had no clue what “Let’s Go, Brandon” was all about.

How badly can the media server their public and still stay in business? I’m sure we haven’t hit the bottom of the pit yet.

My wife pays less attention to news than I do, on purpose. She had no idea who Brandon was either when we saw LGB flags at a flea market a couple weeks ago. I don’t know how many news consumers would be appalled if they knew how duped they were. I bet it’s a giant number. But how to convince them, I have no idea.

Not sure if it makes any difference but I would tell the older folks some facts when the MSM was calling it crack pot theories. Months later I was right. Maybe that got their interest up regarding my news sources. Nobody wants to be the last to know. This doesn’t work for the dummies that don’t care but most older folks I know seem engaged.

I sometimes believe that at least some of my fellow countrymen wouldn’t be happy unless they were miserable.

Love the masochistic and sadistic kinks and the people… persons who consume, feed, and profit, equally, inevitably, it seems.

‘Perpetual doom and gloom’; many people absolutely do embrace the era of Rona and granting decision making to the govt. It was a bit surprising to me initially but after a good deal of thought it now makes sense.

These folks hold the philosophy of expertise as authority. They are willing to cede individual liberty because they don’t want the responsibility that comes with liberty. We have, in our Universities, classes for ‘successful adulthood’. These are things that in the past Parents taught directly or children learned through observation.

Today, the nuclear family is diminished culturally and the lessons must be taught in college. Further, kids of all economic strata held summer jobs and or part-time jobs which taught soft skills; show up on time, teamwork, the boss runs the place not you, listen and respond to customers. Many Parents mistakenly avoid requiring their children obtaining these jobs for social class reasons.

I recall in 1992 a Bill Clinton townhall where a young adult shouted that he wanted Clinton to ‘treat us like we are your children’. It struck me as weird at the time. Now with the delayed adolescence for many extending until the late 20’s and early thirties it makes more sense.

The people who are comfortable with govt control are the people who don’t function well enough to be successful adults. These folks are the perpetual students, earning multiple master’s degrees and eventual PHD soaking up grant funding, student loans and stipends to delay their exit from academia into the real world of private sector employment, rent, mortgages, utility bills and demanding bosses. Others are likewise comfortable with dependency v individual liberty and responsibility.

IIRC, the delta variant was at first characterized as milder than the original. But more contagious.

That was well before Führer Biden ran out of patience with the peasants. And before his Covid death tally exceeded that attributed to Trump.

What will they call the midterm variant? The one they’ll ‘discover’ mid-late summer of 2022 that will, of course, require the same fraudulent ‘fortified’ voting practices used to steal rig the 2020 election.

I think they’ve given up on keeping the House. But with ‘fortified’ voting maybe they can still keep the Senate.

They may need a new naming convention eventually. For variant names the flyover country chuds can easily remember.

You can bet that they will use this in an effort to get children vaccinated.
Since omicron affects the young.
There is a lot of parents resisting getting a jab for their children as the risk of death in children is close to zero.

Way too early to call anything on omicron. Needs more data.

You may be right, but it’s definitely too early to be closing down the whole country again too.

Let me borrow a motto from my Jewish friends: never again.
Next pol who wants “two weeks” spends them in the cooler.

First discovered in four fully vaxxed individuals, this variant has already spread to places as far away as Australia, where only the fully vaxxed may enter.

If only the experts could figure out a connection.

If this new Omicron variant is actually a mild Wuhan strain, as the South Africans are saying, then it should be invited into countries, as that is what a real vaccine consists of – a weakened form of the virus that prompts the immune system without the threat of grave illness (not that the original Wuhan virus was all that deadly, to start with). So we should be importing as many people with Omicron as we can and let them circulate, infecting as many people as they can with the mild version of Wuhan and building up a fast (and natural) immune response among the few who were smart enough or lucky enough not to be experimental guinea pigs for the various mRNA non-vaccines.

Evolution from an abortive to diversified (number, not color) pathogen.

Table 6. Attendance to emergency care and deaths by vaccination status among Delta confirmed cases (sequencing and genotyping) in England, 1 February 2021 to 7 June 2021.

Table 4: Weekly age-specific mortality rates by vaccination status for all deaths, per 100,000 people, England, deaths occurring between 2 January 2021 and 24 September 2021

UK certainly has a lot of cases, but has a remarkably low case fatality rate.

You can’t have that combination unless the vaccine protects against death.

The virus is going to be with us forever. The deaths are overreaction by immune systems. Eventually, through infection or through vaccination, our immune systems will learn to deal with this as a common cold.

The British data confirms that the fully vaccinated have reduced Wuhan-variant virus-related deaths, but, perhaps ironically, increased all-causes death in the same cohorts, and increased hospitalization and deaths in vaccinated cohorts who contract evolved pathogens.