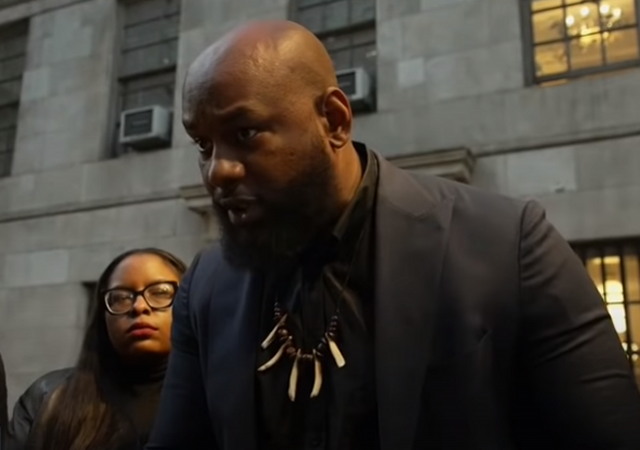 New York City’s new mayor-elect Eric Adams ran on a platform that included returning law and order to the city, but some people on the left are not happy about it.

BLM leaders in New York met with Adams this week and one man leader named Hank Newsome emerged from the meeting promising that the city would see more riots and bloodshed if the city brought back its anti-crime units.

A Black Lives Matter leader vowed there’ll be “riots,” “fire” and “bloodshed” if Mayor-elect Eric Adams follows through with his promise to bring back plainclothes anti-crime cops to battle New York’s surge in violent crimes.

New York BLM co-founder Hawk Newsome debated the plan for a return to tougher policing with Adams during a contentious sit-down at Brooklyn Borough Hall Wednesday that was livestreamed on Instagram.

Although Adams found common ground with the activists on plans to fight poverty in the black community, the former NYPD captain said he’ll be reinstating a revamped version of the undercover anti-crime unit that was disbanded at the height of widespread police protests last year.

“If they think they are going back to the old ways of policing then we’re going to take to the streets again,” New York BLM co-founder Hawk Newsome said outside Borough Hall after the meeting.

Eric Adams, who is former NYPD, responded by reminding people that this was part of his campaign.

Adams, the Brooklyn borough president and a former NYPD captain, promised during his campaign to be tough on crime as New York City’s next mayor, which he said would include bringing back an undercover police unit. Following his meeting with Newsome, Adams remained undaunted.

“I made it clear on the campaign trail,” Adams told CNN on Thursday morning. “I’m going to put in place a plainclothes gun unit. We must zero in on gun violence in our community. … That was my promise, and I’m going to keep it.”

Here’s a video report from FOX 5 in New York:

It’s worth remembering that parents speaking out at school board meeting were branded as domestic terrorists. Which group sounds more threatening?

MAYOR TO-BE ADAMS – SAID HE WILL NOT BE INTIMIDATED

BLM are a bunch of thugs. They extort and threaten to get their way. No wonder they want too defund the police – they are the criminals.

Marxist thugs, that is.

It seems that BLM really does stand for “Burn Loot and Murder.,” since they are demanding that the city stay crime ridden.

I cannot imagine any statement with less credibility than a politician asserting “I will not be intimidated”. They are congenitally intimidated.
However, this is a red line. Adams was elected as a law and order type. He cannot let BLM cross the line.
If Adams truly stands up, I will be ever so happy to eat my words and I will support the man in any way (very minor, at best) I can. The idea of this redneck backing a NYC Democrat goes beyond comprehension, but I am (not very) hopeful.

We’re on mayor, and threaten to Matt fashion, I wouldn’t so much of anything. But if things like that started up I would issue shoot to kill orders.

This crap would not have happened if they started taking out these rioters in Minneapolis and let other cities see what is needed to prevent the destruction coming to their cities.

Sounds like the kind of thing a terrorist group does.

It is the very definition of terrorism:. Violence, or the threat of violence, to achieve political objectives.

That guy must have Sharpton on speed dial to get pointers on how to get a riot in NYC going and be a professional race baiter getting rich in the process.

MOB RULE. Time to end it.

And here we get to see if Adams has a spine, or not.

This will be entertaining.

I guarantee you that Adams won’t be anywhere near any violence that occurs because of his incitement to riot. Blacks like him shoot their mouths off all the time. But when push comes to shove the chickenshit black guy will be hiding in his million dollar mansion in his gated community guarded by private armed security.

Sorry, have the wrong name there. Meant Hawk Newsome, not Adams. My bad. 🙁

Sounds awfully incitementy.. maybe even criminal eh. Maybe time for the Feds to pay this clown a visit….or are they all busy chasing down the J6 terrorists?

No, it isn’t incitement, it isn’t legally a threat, and it isn’t criminal. It’s all 100% protected speech — so long as it remains just speech. Paying him a visit now would have a “chilling effect” on his exercise of his civil rights. But if he ever actually starts a riot he’ll have to be careful how he does it, so as to avoid arrest.

LII: “…but is not limited to, urging or instigating other persons to riot, but shall not be deemed to mean the mere oral or written (1) advocacy of ideas or (2) expression of belief, not involving advocacy of any act or acts of violence or assertion of the rightness of, or the right to commit, any such act or acts.”

If I read correctly, the exceptions to Hawk’s right to express his ideas and beliefs to visit riots and fire on NYC are his advocating to others that such acts are within their rights to commit.

What is saving authorities from visiting Hawk? The fact that he said ‘if” the mayor initiates a more visible, a more active police policy?

That silence you hear is New Yorkers rethinking the Rittenhouse case.

‘Maybe Bernhard Goetz was right after all…’

You are not current or accurate with your comment.

Looked at NYSRPA v Bruen before SCOTUS, or its Amici including that by Bronx pubic defenders. … As well Rittenhouse’s prosecution is a travesty which I still would like to believe is unlikely in metro NYC. Yet, there are many problems with politicians and some elements within large PDs, in NY they do not pander so wholly to the DAs. …

Separately, there are also more folks possessing firearms than NYS / NYC would like to admit, given their efforts to avoid sharing such information as an argument given the opportunity in Bruen.

I also would note while historically Chicago has always competed with NYC; not so much the reverse. And, NYPD for all its deficiencies is no CPD. In Chicago politicians run the PD, in NYC the unions have greater control over the PD (which is why de bla should never have taken the unions on).

The silence you hear is all the empty neighborhoods from people deciding this is the final straw and move to Florida.

New Orleans didn’t brook any bullshit until the protestors got uppity and started destroying statues.

Then, overnight, the protests lost their glamor and fizzled out here.

“It’s racism for you to watch us while we commit crimes!”

If this new Democrat Mayor has any ambitions to a governorship of New York state he’ll call the bluff and establish the crime units.

When BLM/Antifa makes trouble he orders the police to arrest them en masse.

Put massive pressure on the DA to prosecute.

New York City is so low that just doing this alone could raise this new mayor’s stature among the public.

It’s an easy win for him if he has the guts to keep his promise.

The best outcome is when their no reason to prosecute, just a funeral.

Using my old standby, the L Neil Smith Scale of Mettle, I’m going to wager Adams doesn’t have those guts.

So the DoJ under Garland will get right on this and launch an investigation to determine whether these are idle musings or concrete threats of domestic terror that endanger NYC? /S

Either way the d/prog regime loses. Investigate and annoy the foot soldiers of the regime as well as their political masters. Fail to investigate and after the riots/destruction/assaults/loss of life and be further exposed as a partisan hack. As with so much else the current d/prog officials show the world who they are and what they believe by their choices.

Were I the mayor, my response would be, simply, “your terms are acceptable. See you on the streets.”

Then establish the mobile units, re-instate much of what Rudy did to combat street crime, and wait for BLM to riot. Should they do so, enforce the law vigorously.

The DAs will then have to do their part, and ditto the judges. If the DAs write the arrests down to desk warrants this will fall apart. But if the DAs have a spine, someone high up in the BLM movement will have a choice to make about how much bail money they’re going to spend. My guess is, not that much.

““If they think they are going back to the old ways of policing (you know, the ways that actually protected black lives) then we’re going to take to the streets again,”

So, basically, he’s saying “Black live don’t matter, as long as I get my political objective.”

Okay. Good to know. Thanks for sharing.

The NYC mayor and NYPD commissioner need to uphold the law and stop riots, looting, property destruction, and protect citizens and businesses. Institute “stop and frisk”, curfews, and riot measures. BLM should be declared “domestic terrorists” and treat them accordingly.

“need” to uphold the law…? Absolutely? “Will”. I am not holding my breath.

There is no such status, so it’s impossible to declare anyone such. Any talk of such a declaration is pure bluff.

There is a saying that you can tell who has the power by who you cannot make fun of. You cannot say ANYTHING even vaguely critical of BLM (“Fry them like bacon”; “What do we want? Dead cops. When do we want it? Now.:.
Eric Adams has a red line drawn for him. I absolutely, categorically, wish him well. I have no expectation he will rise to the occasion.
This is make or break.

I remember being appalled back in the Hill Street Blues day when the storyline had the precinct appoint the chief thug of the local street gang to be one of the members of the precinct’s own steering committee. I thought that was anathemaic madness back then.
But this is exactly how I can see a man like Adams “running” New York.

“There will be riots”. How is this not incitement to riots/violence?

Because it doesn’t even come remotely close to the definition of incitement.

So, Hawk Newsome and the other Marxists of BLM is pro-crime.

hawk newsome is a communist, and like all demonrats and would be tyrannts knows that “power comes out of the barrel of a gun” … now sometimes that is an “actual firearm”, but before that it comes from inciting the stupid, willfully ignorant into a frenzy focused on a singular “We / Them” argument. And, throughout human history the most obvious “We / Them” argument is they look different than us; closely followed by “They Got Stuff. It Should Be Ours.” …

Considering that newsome is challenging Adams and neither “battle cry” appears directly applicable, I am praying that his (and his sister’s) true personna (petty theft, street hustlers) will readily be apparent to those who are “already enjoying ‘their turn'” thanks to pervasive “reverse discrimination” which is cresting after 60 + years of demonrat lies.