“The results of Tuesday’s election are in. All votes have been fairly counted. And I, of course, accept the results.” 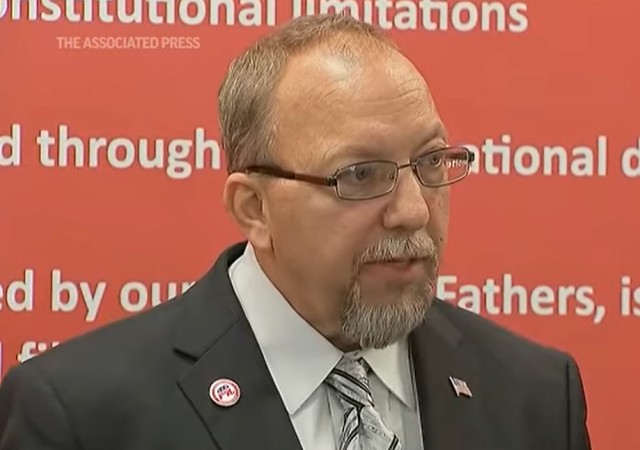 After initially refusing to concede he lost his campaign for reelection to represent New Jersey’s 3rd Legislative District, ostensibly on grounds of making sure every vote was counted, longtime State Senate President Steve Sweeney (D) officially conceded the race to Republican Edward Durr on Wednesday in one of the wildest upsets in modern political history.

During a press conference at the state house in Trenton, Sweeney acknowledged his defeat and congratulated Durr, noting that there was a clear “red wave” that had swept parts of the state, ultimately causing him to lose to Durr by roughly 2,000 votes:

“[The results of Tuesday’s election are in. All votes have been fairly counted.] I of course accept the results. I want to congratulate Mr. Durr and wish him the best of luck,” Sweeney said during a speech at the statehouse complex Wednesday.

Sweeney said his loss to Durr, who spent at least $2,300 in the contest, was the result of overwhelming GOP turnout in his suburban, politically split district. Sweeney lost by about 2,000 votes after spending about $305,000 on his campaign.

“It was a red wave,” Sweeney said.

Hours after Sweeney’s concession, in which he also hinted at future political ambitions which may or may not include a run for governor, Durr said during a news conference that he was so overwhelmed by everything that had happened that he felt like he was going to “throw up”:

“I feel like I’m about to throw up,” Ed Durr said during a news conference after Senate President Steve Sweeney conceded the race, when asked if there’s a learning curve for him. “This is all new to me. It’s all overwhelming, but I am very happy that the voters selected me. I’m going to earn that vote and I’m going to prove them right.”

He said the “secret” to his win came down to two words: “Phil Murphy.”

“’The voters have spoken,” Durr said. “They don’t want government rule by a dangerous guy armed with a bunch of executive orders.”

Here’s a portion of his remarks from that press conference, where he noted he had talked to Sweeney, who had congratulated him:

As it turns out, Durr is already making waves in the Garden State, receiving a call from former President Donald Trump while getting blasted by Gov. Phil Murphy (D) who alleged Durr, a truck driver with three kids and six grandkids and who conducted an old-school campaign by knocking on doors himself, was “dangerous” in comments made to the media last Friday:

Showing some political savvy, Durr responded accordingly to Murphy’s attack by turning the tables on him, suggesting it was Murphy who was the dangerous one:

“Murphy’s policies have made New Jersey the most-moved-out-of-state in the nation, closed one-third of our small businesses and killed 10,000 nursing home residents,” Durr said. “The fact is, Phil Murphy is far more dangerous than I could ever be.”

Durr added that he intends to fight against Murphy to make New Jersey better.

“Nothing he has done has made New Jersey fairer or stronger,” he said. “Unlike Murphy, I’m going to Trenton to help make New Jersey better for everyone in our state.”

Durr also had the perfect response to a piece published Saturday at The Atlantic written by Never Trumper Tom Nichols, who smugly declared that we needed people in government who actually knew a thing or two about politics, not upstarts like Durr who wanted to shake things up:

Sen.-Elect Ed Durr on @SaveJersey live when asked about @TheAtlantic’s contention that he doesn’t know how to govern in the New Jersey legislature:

“How much worse could I make it?”

I suspect many New Jerseyans would agree with him. I mean the man has a point, right?

Maybe it was too much scrutiny. I was thinking maybe a simple mail truck found in a ditch.

He got slapped down because they were still working to steal the governor’s race.

The Atlantic magazine hit-piece is wrong.

USA needs more people in office who are NOT politicians. Politicians tell you whatever they need to get elected and then serve as a ruling class. Real people know that they serve the people – the people do not serve them.

Durr may not be perfect (who is) but he understands that he serves the people. And that is a breath of fresh air in Trenton NJ.

I hope Mr. Durr is given a very large parking space when he comes to work……

That and maybe a bodyguard. This is New Jersey.

There is a downside to this. We are now down another sorely needed truck driver…

“[The results of Tuesday’s election are in. All votes have been fairly counted.] I of course accept the results.”

Translation: “Blimey, this ‘redistribution of votes’ is trickier than I thought!”

Maybe he can find a new deal feeding FatDaddy Christie. As it were, Ed will be as far down the list as any other noobie but I wish him well.

We need more people in politics who can be “xenophobic” and even criticize Muslims. I like him a lot. He can learn the details. He’s the right character, let’s hope he doesn’t change too much.

All he has to do is hire the right lawyers on his staff.

I suspect Sweeney got told by his political masters to STFU, lest he draw too much more attention to voting shenanigans.

It was just 5 short days ago that Sweeney announced, “…12,000 ballots recently found in one county.” Apparently, the vote fraud squad were caught with their pants down for this upset to adequately respond to Sweeney’s desperate dogwhistle for a midnight vote dump without getting caught.