“I joked with people and I said, ‘I’m going to shock the world, I’m going to beat this man,.” 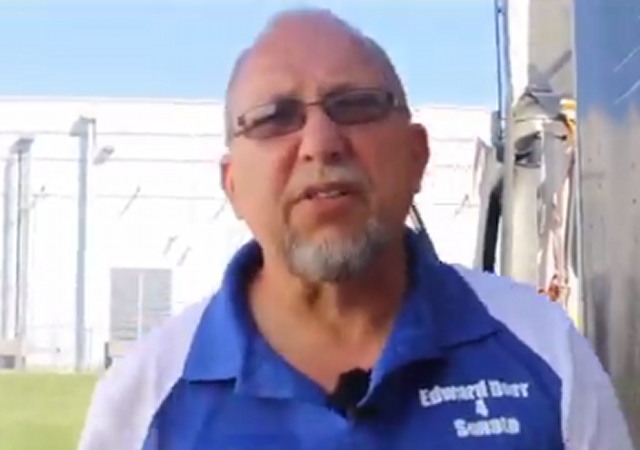 In an election full of surprises, perhaps no one has a better story than New Jersey truck driver Ed Durr, an average guy who decided to run for office because he was sick of having what he felt was poor representation.

Durr ran his campaign on a shoestring budget and defeated Steve Sweeney, the sitting president of the New Jersey senate.

Sweeney has led the Senate for 12 years. There was talk he would run for governor in 2025.

The latter might be in jeopardy thanks to Durr:

“You have the debacle of unemployment. The masking of the kids in school. You have Senator Sweeney trying to take away peoples’ medical freedom rights,” Durr said. “I think the perfect storm was that he stepped into a pile of you-know-what and couldn’t get out of it because he didn’t know which way to turn. I just tapped into the right focus.”

Durr, who considers himself a “constitutional conservative,” said he also sensed a backlash to the influence wielded by South Jersey Democrats, whose cohesion under power broker George Norcross had made them virtually unbeatable — until now.

“Just the constant nepotism, corruption, ‘if you take care of me, I’ll take care of you deals,’” Durr said. “You don’t have evidence, you can’t get anyone arrested or prove anything, but there’s always ‘when there’s smoke there’s fire’ kind of statements.”

Meet Ed Durr, the candidate who might knock Steve Sweeney out of the Senate

Durr, a truck driver for the furniture store Raymour & Flanigan, held a roughly 2,000-vote advantage Wednesday morning over Senate President Steve Sweeney, an officer in the Ironworkers union who’s led the upper house for 12 years and is the second most powerful official in New Jersey government.

In a night filled with surprises beyond the razor-thin governor’s race that could remain unresolved for some time, the race in South Jersey’s 3rd Legislative District was the biggest shocker — and one with massive implications for the future of New Jersey politics. The district includes parts of Gloucester, Cumberland and Salem counties.

Even Durr harbored doubts about his chances, and wasn’t ready to declare victory just yet, telling POLITICO he’s “walking on eggshells” until the results are official. It’s not clear how many outstanding ballots remain in the race. But it was looking bleak for Sweeney, who was until recently talked up in Democratic circles as a likely 2025 candidate for governor.

This is the New Jersey truck driver who is beating the NJ Senate President after spending only $153 on his campaign – Go Ed Durr!!
pic.twitter.com/OoqysjYprb

NJ.com has some background on how Durr entered the race:

“I joked with people and I said, ‘I’m going to shock the world, I’m going to beat this man,’” Durr said Wednesday afternoon. “I was saying it, but really kind of joking. Because what chance did a person like me really stand against this man? He’s literally the second-most powerful person in the state of New Jersey.”

Durr, a lifelong New Jersey resident with three kids and six grandchildren, announced his intentions to challenge Sweeney earlier this year to little fanfare. In fact, a link to his campaign website brings up error codes. Most people outside of South Jersey had never even heard of him.

But on the campaign trail, Durr said Republican Jack Ciattarelli, who’s engaged in his own tight race for the governorship with incumbent Democratic Gov. Phil Murphy, told reporters Durr was the right man to challenge Sweeney because he is “fearless.”

Ace of Spades says we need ten thousand more like this guy and I agree.

Mow that’s what I’m talking about!

Sorry, They just magically “found” 12,000 votes for the democrat.

No, they didn’t. Sweeney was referring to 12,000 votes found in another county. He was citing it as an example.

This is a guy that spent apparently $5000 on the campaign (I guess it was only $153 in the primary that was being reported), and unseated the Senate President.

And this is a seat that the idiot RINOs spent over $20 million running an idiot RINO and lost just a couple years ago.

Moral of the story?

Enough with this bullshit from the GOPe RINOs about how only ‘moderates’ can get elected in places like this. Milquetoast RINO idiots will ALWAYS lose. Liberals only vote for liberals, and conservatives are sick of jackasses like Romney being shoved down their throats.

I read somewhere that overnight, there have been enough ballots “found” to negate his win, and Sweeney has not yet conceded. Would love to see if you can verify that.

I saw that too. After they lose they do not concede and say we have to count every ballot. Then they start finding stashed ballots. Prolly happen in Va. too.

There are some House of Delegates seats in VA that haven’t been called yet, but the GOP has flipped enough to ensure at least a tie. The Democrats have conceded the Gov., Lt. Gov. and AG races.

No they didn’t find enough votes to negate his win. Sweeney was referring to a bunch of votes found in another county. He’s engaging in wishful thinking, hoping he can do the same in his county

Few things can brighten your day like seeing a Dim career politician get a humiliating defeat.

If the results hold, and even if they don’t and it flips back to Sweeney, it’ll be another example of a longstanding politician who learned a hard and embarrassing lesson in underestimating your opponent.

What an amazing upset; the victor is just a working-class guy who was sick of the corruption, profligacy, incompetence and arrogance of the Dhimmi-crat apparatchiks. Definitely a victory to savor.

If my civics education (c. 1957 – 58) is correct, this is just the kind of person The Founders had in mind to represent their fellow citizens. The career politician was not well thought of.

If it comes to a challenge, I hope LI lets us know, along with an address to send the check to.

This guy needs to know that Joe Average has his back.

No concession yet. Rumor is the Senate President is still searching for the ballots that will put him over the top. I’m sure they will suddenly appear soon.

There seems to be an update.
The POS demo-Rat will not concede. They “found” 12,000 magical ballots.

Mr. Durr does not have the money to legally challenge these shenanigans.

But you know who does have the money?

New Jersey? I suspect Durr’s life is no longer insurable. Nor is the life of the corrupt “agent” who was tasked with delivering a sufficient number of fraudulent “votes” to make sure something like this did not happen.

Ah geez, I am happy for him that he won and beyond delighted that he won against “the system”. But, there is a huge downside in that he’s going to have to learn how to operate in a very hostile environment. On the uptick, most of NJ is not at all like the metro NYC area so maybe he can find a place among the good folks that make life happen from day-to-day.

NotKennedy: unfortunately, this wasn’t even metro NYC. It was corruption-packed South Jersey.