“Simply put, I will not support a bill that is this consequential without thoroughly understanding the impact that it will have on our national debt, our economy, and most importantly, all of our American people.” 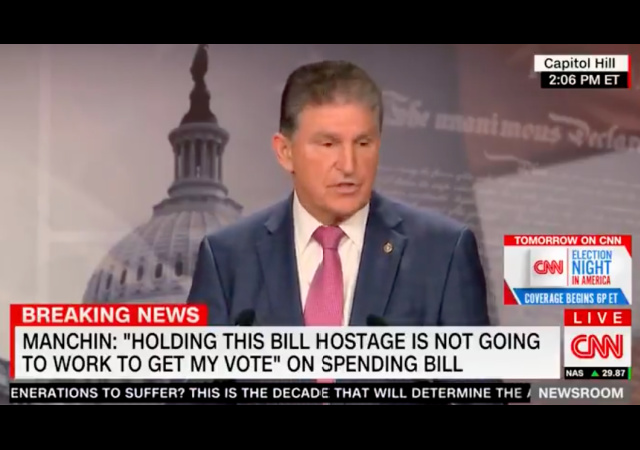 The progressives want to use the bill to push their stupid programs, calling them “human infrastructure” in order to justify putting them into the bill.

Manchin refuses to endorse a bill until they all have a “thorough review” of it and its impact:

“And I’ve always said, if I can’t go home and explain it, I can’t vote for it; and if I can, I will. And I’ve worked in good faith for three months for the past three months, with President Biden, Leader Schumer, Speaker Pelosi and my colleagues on the reconciliation bill, and I will continue to do so. For the sake of the country, I urge the House to vote and pass the bipartisan infrastructure bill. Holding this bill hostage is not going to work in getting my support for the reconciliation bill. Throughout the last three months I’ve been straightforward about my concerns that I will not support a reconciliation package that expands social programs and irresponsibly adds to our $29 trillion in national debt that no one seems to really care about or even talk about. Nor will I support a package that risks hurting American families suffering from historic inflation. Simply put, I will not support a bill that is this consequential without thoroughly understanding the impact that it will have on our national debt, our economy, and most importantly, all of our American people.”

Manchin @Sen_JoeManchin: "Simply put, I will not support a bill that is this consequential without thoroughly understanding the impact that it will have on our national debt, our economy, and most importantly, all of our American people." pic.twitter.com/tcI0z41MY6

Manchin demands clarity on the bill:

“I for one won’t support a multi-trillion dollars bill without greater clarity, about why Congress chooses to ignore the serious effects of inflation and debt that have on our economy and existing government programs. For example, how can I in good conscience vote for a bill that proposes massive expansion to social programs when vital programs like Social Security and Medicare face insolvency and benefits could start being reduced as soon as 2026 and Medicare in 2033, and Social Security. How does that make sense? I don’t think it does. Meanwhile, elected leaders continue to ignore exploding inflation, that our national debt continues to grow and interest payments on debt will start to rapidly increase when the Fed has to start raising interest rates to try to slow down this runaway inflation.“

“I for one won’t support a multi-trillion dollars bill without greater clarity, about why Congress chooses to ignore the serious effects of inflation and debt that have on our economy and existing government programs." pic.twitter.com/wV6bUHMEti

Then the mic drop:

“Let’s work together, and I mean that. Let’s all work together on getting a sensible reconciliation package, a package that really strengthens our nation and makes us better and leads the world. Thank you all. Let me say — let me just say — let me say one thing. I’m not going to negotiate in public on this, because I’ve been dealing in good faith and I will continue to deal in good faith with all of my colleagues on both sides. It’s time to pass the bill and quit playing games.”

“In my view, this is not how the United States Congress should operate…The political games have to stop,” Sen. Joe Manchin says while urging the House to vote on the bipartisan infrastructure package. https://t.co/hi29tu0lxM pic.twitter.com/A5lqOBl4pc

They’re treating Manchin as if everything he says is merely a negotiating position, rather than something he actually believes and wants. IOW, they (meaning Pelosi and Schumer and others in leadership) assume he is as cynical as they are.

This approach does not appear to be working. Do not expect them to change, however. Nothing else would make sense to them.

btw: This does not mean that Manchin won’t cut a deal at some point. If he does, it will be because he has changed his approach not because they have changed theirs.

Also: Note that I left Biden out of this discussion. He doesn’t know what is going on and has no role in working any of this out except as a convenient front man.

Gee thanks. If I wasn’t depressed before, I feel that way now.

At this point we have no choice but to rely on the states and courts to slow the madness down until next Nov.

That’s the succession in case of war or massive loss of life.

If Biden resigns or is forced out, the VP becomes President and then nominates a new VP for approval by a majority of both houses of Congress.

They’d put Kamala in at least temporarily and have her appoint someone they feel can win in 2024, then she resigns (is forced out), the competitive VP moves into the big chair and they put in their next best choice as VP.

The danger is, once Harris moves from VP to Pres, they lose the tie-breaker in the Senate to get their VP choice approved. The GOP could keep the seat open and the Senate tied for as long as they think politically feasible.

Do you really think that Democrats would select someone that could be confirmed by a majority of the Senate without a Kamala tie-breaker? That is why Dems are gunning to get a couple more seats in 2022 so that in 2023 they can put a majority in there that is favorable to their leftist moneybags.

If it makes you feel better, the Presidential Succession Act of 1947 (as revised) is unconstitutional.

Article II, Section 1, Clause 6 does give Congress the power to pass a law establishing presidential succession:

“Congress may by Law provide for the Case of Removal, Death, Resignation or Inability, both of the President and Vice President, declaring what Officer shall then act as President, and such Officer shall act accordingly, until the Disability be removed, or a President shall be elected.”

The problem for Pelosi, et al., is that the Constitution defines who is an officer of the United States in the Appointments Clause.

Note Article II concerns presidential powers. the Constitution provides the President with the power to appoint “officers of the United States.” An officer is anyone either A) appointed to the executive branch who serves in an office exercising power delegated to that officer by the President. Principal officers have to be confirmed by the Senate. A President can be required to jump through hoops to appoint “inferior officers.” And appointees to the judicial branch also qualify as officers.

But legislators are not “officers of the United States” under any definition. An officer has to be appointed to an office; contresscritters aren’t appointed but elected. A statute can’t override the Constitution. The Constitution clearly states that anyone in the line of succession must be an officer. So Congress can pass a law establishing which Cabinet officers are in the line of succession, and in what order. And if for some reason no principal officers can take the helm, which inferior officers and in what order. But elected legislators aren’t officers because officers have to be appointed.

Talk about settled law. It’s been settled since our founding. In 2007 the DoJ wrote a memorandum on the subject. Note the language:

“This memorandum addresses the requirements of the Appointments Clause of
the Constitution, which sets out the exclusive methods of appointing all “Officers
of the United States” whose appointments are not otherwise provided for in the
Constitution. U.S. Const. art. II, § 2, cl. 2. In particular, we address which positions are required by that Clause to be filled pursuant to its procedures. We conclude that any position having the two essential characteristics of a federal “office”
is subject to the Appointments Clause. That is, a position, however labeled, is in fact a federal office if (1) it is invested by legal authority with a portion of the
sovereign powers of the federal government, and (2) it is “continuing.” A person
who would hold such a position must be properly made an “Officer of the United
States” by being appointed pursuant to the procedures specified in the Appointments Clause.…”

So when those greedy, vile congresscritters who (once more for emphasis) are not in any sense of the words officers of the United States and wrote themselves into the line of succession they acted unconstitutionally. I would love to see the look on Nancy Pelosi’s face when she strides into the Oval Office and is promptly kicked out.

OK, sure, I know, since when do Democrats give a s*** about the U.S. Constitution? They hate it, in fact, so much so they’re trying to substitute Soviet and hope we don’t notice. And if Pelosi were to unconstitutionally seize power the left would cheer, and the federal law enforcement, national security, intelligence agencies would do anything to make sure nobody disturbed the coup.

Referring to various parts of the spendalooza package as “human infrastructure” betrays the left-wing mindset that American citizens are merely subjects or objects to be rewarded or punished according to their whims.

Tomorrow’s voting may determine the outcome of these bills. If Youngkin does not have the VA election stolen from him, a lot of Democrats may get cold feet about controversial legislation and some may even decide it is time to retire. (Murphy losing in NJ is a real long shot, but that would really panic the party.)