“The problem is here they want White supremacy by ventriloquist effect.” 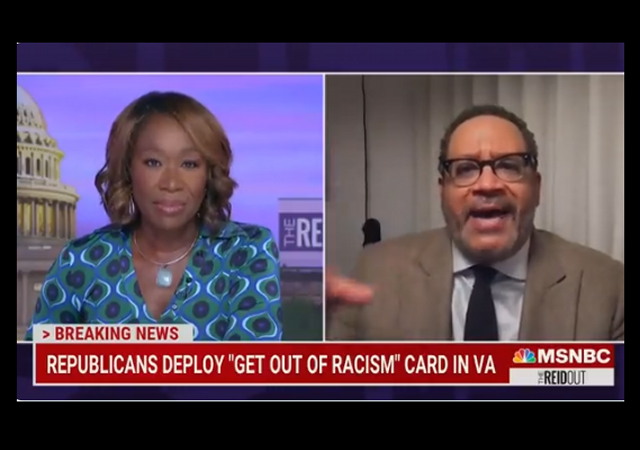 Reid and Dyson are the racists here. Not Winsome Sears and not the people who voted for her and Youngkin.

Sears, a Jamaican migrant and Marine Corps veteran, became the first Black woman elected to the position in Virginia on Tuesday. She declared herself the embodiment of the American dream and that her victory had destroyed “all of the narratives about race.”

This is the full quote from Dyson:

“You are doing what all political figures what must do: make choices,” Dyson said. “The problem is here they want White supremacy by ventriloquist effect. There is a Black mouth moving but a White idea … running on the runway of the tongue of a figure who justifies and legitimates the White supremacist practices. We know that we can internalize in our own minds, in our own subconscious, in our own bodies the very principles that are undoing us. So to have a Black face speaking in behalf of a White supremacist legacy is nothing new.”

“There is a black mouth moving but a white idea running on the runway of the tongue of a figure who justifies and legitimates the white supremacist practices.” pic.twitter.com/P3O8ciTveG

A disgusting and hateful display. MSNBC should be ashamed of broadcasting this filth, and make no mistake, that’s just what it is. Filth.

Despicable comments about Winsome Sears. Also, the venom these people regularly spew against white people is acceptable? It shouldn’t be. https://t.co/xHAoFxe7OH

“You aren’t really black unless you agree with me,” says the anti-racist https://t.co/cPMKGrrUyu

This is one of the most repugnant and racist segments broadcast by a TV network this this year. The message could not be clearer:

People of color are duty-bound to recite liberal orthodoxy and pledge loyalty to the DNC, and those who don't are brainless puppets being used: https://t.co/RKsVoVlktx

Michael Dyson is an esteemed professor at Vanderbilt.

He’s considered an intellectual giant on the left. He has all the credentials society has put immense value on. He’s a reverend.

If that scumbag doesn’t show you the extent of our institutional rot, nothing will. https://t.co/vT9exmCewf

The Winsome Sears team responded by reminding Reid that Sears has offered to appear on her show.

They might want to consider reaching out to MSNBC and demanding a public, on-the-air apology.

If it were possible to bring back the dead, I would like to see a TV show with Orval Faubus and J. B. Stoner having a similar conversation.

Not only a race hustler, but a pompous one at that. Dyson pretends to be an intellectual. He’s not.

I’ll allow that he’s probably heard of the four arithmetic functions. As to using them, well, maybe we shouldn’t go there.

He’s an expert at division. In fact, it’s all he does.

There is a Black mouth moving but a White idea … running on the runway of the tongue of a figure who justifies and legitimates the White supremacist practices.

A round mound of sound being profound.

His vacuum sucks too.

“a black mouth with a white idea…”

Goodness gracious!!!! That’s the most terrible and wicked thing I’ve ever heard of. It is strictly forbidden for a black person to have a white idea. Something needs to be done about that immediately. We need to get the Taliban over here and starting down people who do that.

Sometimes it doesn’t even go as deep as ideas. If a black speaks with the same accent as others of their area, without the “cadence”, or without the jive-talk, they are trying to be white.

Yeah, and don’t pull your pants up all the way or you will really be trying to be white.

I have a dream that my grandchild will one day live in a nation where ideas and policies will not be judged by the color of their creator’s skin, but by the supremacy of their results.

Dyson is proof that bigotry knows no color.

Yes, all races have bigots, but white bigots aren’t allowed to pull race cards and they would never be allowed to go on tv and say the reverse about a white politician.

All they can do is call us names. It’s the go to arrow in their quiver because it is all that remains. The best thing DJT did is cause these loons to go full Trotskyist. It’s as if he threw holy water on a B movie vampire and it stripped away the facade and revealed their ugly inhumanity. Every black, Latino or Asian r official or candidate gets the treatment of ‘you are inauthentic’ because ‘a true x person’ would vote d/prog.

Please d/prog, continue to insult people who leave your ideological plantation. You are making our sales effort and outreach that much easier.

The Left justifies and legitimates black supremacist practices (aka BLM), so naturally, the Left must attack others for what the Left blatantly does.

I really feel sorry for these people. Imagine having such a low opinion one’s self.

This movement is very similar to the women’s movement of the sixties. Instead of making me feel better about myself, it made me hate myself. Thank goodness I saw the light!

So now we have “white ideas”.

Like funding historical black colleges and universities which have traditionally gotten short shrift from the general assembly? Even with democrats running the show?

Is that the white idea he’s talking about?

Even if they tried with all their collective might, they still couldn’t find the roots of a quadratic equation. I’m even doubtful if they could solve a simple linear equation.

They’re on TV for a simple reason, the irony of which escapes them utterly – b/c of the color of their skin. And they cry “racism” at the drop of the old hat.

Something about a speck, a beam, the eye.

There is a Black mouth moving but a White idea … running on the runway of the tongue of a figure who justifies and legitimates the White supremacist practices.

This sounds like the blathering of a semi-literate making an attempt at sounding profound and erudite.

In the meantime, have any of the Professional Hispanics spoken up about the new AG? I’ve not heard anything…

If you don’t pledge allegiance to the Party of Power, Privilege & Slavery, you’re a White Supremacist.

Now what was Reid saying about internalising the principles that are ‘undoing us’?

Sears would demonstrate some serious Marine supremacy…. hopefully more then the Jarheads that got nailed by the British commandos at 29 Palms.

But somehow, *we’re* the racists…

I’d like to the coward say that to Sears’ face.

Mr. Sears said a lot of words instead of just saying that black people aren’t allowed to think for themselves.

MSNBC is an open platform for racist blacks and black allies like Nicole Wallace. They’re adept at feigning indignation at conservatives and at blacks who don’t toe the line. They’re also adept at gaslighting, like when they assert that CRT “isn’t real.” It’s all theater. The real danger lies in those who subscribe to their lies and fakery, and I’m sure there are plenty.

Typical commie…Think and act as I command you! OR ELSE! (Note; Not as I “Do” but as I “Command”.

I can’t believe this guy is a professor at Vanderbilt. I posted this statement 7 hours ago on FB: “Congratulations to Winsome Sears, a hard working achiever whose successes put the lie to the notion of “systemic racism” and CRT ideology. More than likely, she will now be attacked by Democrat-“Progressive” racists.” It didn’t take them long, did it?

I can believe it. Vanderbilt needed a token AA* hire.

* I bet you racists thought I mean African American, but I meant Affirmative Action hire.

So please, feel free to continue being racists.

This is how the woke left attempts to deliigitimize dissent

What the Hell did anyone expect. Biden even said if you don’t kneel to him, his administration, and his media propagandists,

So, now blacks are “ventriloquist dummies?”

Who be the racists, hmmm?

So blacks are beholden to the Progressives/Democratic party and their worldview based on their skin color – they are ostracized and labeled white supremacist (again, a successful, accomplished black to disagrees with the anti-racist party is called a white supremacist).

Isn’t this a modern definition of slavery?! Seems to me it’s not the republicans who are supporting slavery…but the progressives/democrats…

For someone who’s so unhappy about white people, I wonder why Joy Reid bleached her hair.