“I wish Joy Reid would invite me on her show. Let’s see if she is woman enough to do that.” 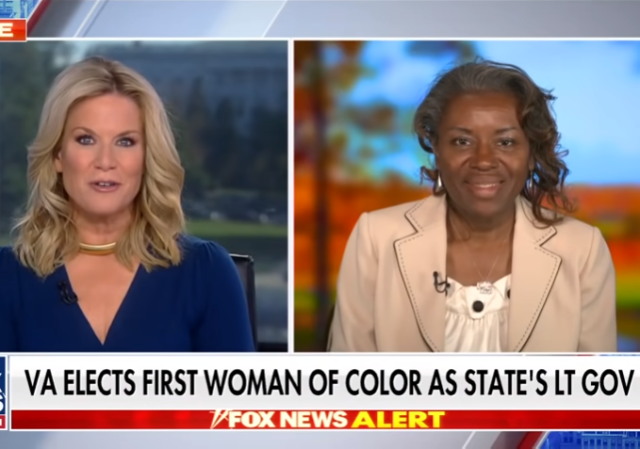 Winsome Sears appeared on FOX News yesterday and was asked to respond to Joy Reid’s claim that Republicans are dangerous racists.

Sears gave the perfect response. It’s no wonder that this woman has become a star overnight.

WINSOME SEARS: We are framing too many issues in terms of race. It continues to divide us. And unfortunately, politicians are using it as a tool because of the things that happened to us historically to advance, I think, their nefarious purposes.

If we stop looking at race and look at people. You see, I am destroying all of the narratives about race. Look at me! Look at me!

MARTHA MACCALLUM: Here’s what Joy Reid said last night over on MSNBC about the Youngkin win and your win.

JOY REID, MSNBC: You have to be willing to vocalize these Republicans are dangerous. This is not a party that is just another political party that disagrees on tax policy. At this point, they are dangerous to our national security. Stoking that soft white nationalism eventually leads to the hard-core stuff.

WINSOME SEARS: I wish Joy Reid would invite me on her show. Let’s see if she is woman enough to do that. I would go in a heartbeat, and we will have a real discussion without Joy speaking about me behind my back. She talks about white supremacy. Does she know that I ran against a white supremacist. Joy, come on. Get your facts straight and then come talk to me.

This is the short version if you’re pressed for time:

.@WinsomeSears DESTROYS @JoyAnnReid over her calling Republicans white nationalists: "I wish Joy Reid would invite me on her show. Let's see if she is woman enough…She talks about white supremacy. Does she know that I ran against a white supremacist?…I’m waiting for you." pic.twitter.com/s89XrFD2RY

Jemele Hill of the Atlantic has also been tweeting about racism being the reason for the outcome of the election:

To which Sears responded:

Joy Reid would be crazy not to take Sears up on this offer. It would be the highest ratings her show will ever get.

You’re right. I took a look at the Reid Out and there were no entrails in there, just a cavity filled with offal.

Winsome Sears is just awesome. She will be governor or Senator one day – maybe even President.

She is the race-baiting Woke Progressive-Socialists worse nightmare. She embodies and enlivens the American dream.

From what I understand she was not born a citizen. So no presidency for her. 🙁

An ember of hope. Absolutely!

Joy one-note Reid only knows how to throw bombs. She’s incapable of defending her wild and stupid allegations.

Because these media types, along with many pols, can isolate themselves inside bubbles where they are never challenge to support their arguments, they don’t have the brain muscles, the sharpness, to render cogent counterpoints.

Look at Biden. He simply walks away!!!

That “I beg to differ” response, with that specific picture, I love it!
It speaks volumes.

She couldn’t debate water out of a boot if her premises were written on the bottom of the heel.

She must’ve took lessons from Obama.

Just remember, it’s only because of democrats that we even have to discuss a person’s race or sex at all, or that it has any bearing on their fitness for office.

Dems always like to call Republicans racist or sexist or whatever, but when we find good Republican candidates, their race and sex doesn’t matter. Only that they have their head on straight.

I love the fact that Sears is a Marine. (Not ex-Marine. Once a Marine, always a Marine.) In the Marines, she learned to stay strong through whatever the enemy throws at you. She’ll tear Reid a new one, but Reid will be a winner too, because it will boost her ratings to deviate from her usual Socialist crap.

I’d pay to see that debate!

“Joy Reid would be crazy not to take Sears up on this offer. It would be the highest ratings her show will ever get.”
It would also be the worst beating she will ever get.