The attacker is a known Hamas supporter and a Jerusalem mosque preacher. 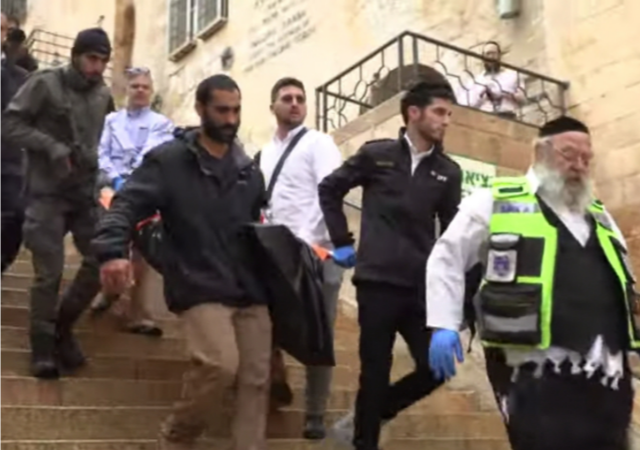 A Hamas gunman went on a shooting spree in the Old City of Jerusalem on Sunday morning, killing one Israeli and injuring four others.

The attacker is a known Hamas supporter and a Jerusalem-based mosque preacher, the Israeli media reported. “Described by his friends and acquaintances as an “Islamic scholar,” the 42-year-old Abu Shkhaydam was a well-known mosque preacher in east Jerusalem mosques, including the al-Aqsa Mosque. Others referred to him as a “senior Hamas official in Jerusalem”,” the Jerusalem Post reported.

The man who died in the terrorist attack has been identified as a 26-year-old Jerusalem tour guide. “The man killed in today’s terror attack in Jerusalem’s Old City is named as Eliyahu David Kaye, 26, from the city of Modiin,” The Times of Israel reported. “Kaye, a recent immigrant from South Africa who was employed at the Western Wall, was shot dead by a Palestinian gunman.

Among the injured is a 46-year-old Rabbi and father of eight, and a student of a Jewish religious school.

May God avenge our blood. Pray for the victims. pic.twitter.com/3VX4nvZl8u

One man died and three other were wounded, one in serious condition – in a shooting attack in the Old City of Jerusalem.

Two members of the police were among the injuries and were said to have sustained slightly injured.

The assailants, a 42-year old Fadi Abu Shkhaydam, a resident of the Shuafat refugee camp in Jerusalem, who opened fire, was shot dead by troops.

Minister of Public Security Omer Barlev, said on Sunday that the man was a member of the Hamas terror group and that the police believe the attack was planned in advance and that the assailant’s wife had left the country last week.

In an apparently related incident in the Israeli city of Jaffa, an Palestinian knife attacker injured a 67-year-old man. The police are reportedly treating the stabbing as a terrorist attack. “If confirmed, it would be the second terror attack of the day,” the Times of Israel noted.

The Jerusalem shooting comes days after the British government announced its intent to ban the Hamas terrorist group in its entirety. The move provoked angry reaction from the Gaza-based Islamic terrorist group. Lebanon’s Hezbollah terror militia also slammed the UK for blacklisting the fellow terrorist organization.

Terror attack is seldom if ever the right term. It’s more of a callousness attack, which meets with a sort of irked ennui.

It’s terror only in hopes of clicks.

And, the vile, utterly despicable Dhimmi-crats still insist that Muslim terrorist outfit, Hamas, and, its rival terrorist group, Fatah, allegedly constitute legitimate “partners in peace,” all glaring and ample historical and contemporary evidence to the contrary.

At this point, I fairly consider the Dhimmi-crats to be enablers, whitewashers and rationalizers of Arab Muslim violence and hatred against Israel and against Isrsaeli Jews. The Dhimmi-crats’ longstanding whitewashing, rationalizing and trivializing of Arab Muslim violence against Jews, and, the Dhimmi-crats’ persistent, dishonest and unfair vilification of Israel and of Israeli Jews, gives Arab Muslim terrorists a shiny, big green light to attack, because they know that no matter how many attacks they launch, and, no matter how many Israeli Jews they maim and kill, the American Dhimmi-crats will always have their back and will never proffer a scintilla of criticism or condemnation.

Is there some reason that civilized countries cannot become uncivilized long enough to purge the world of lower forms of life?

Despite the loss of life by the Israelis, the Hamas killer was killed-thus ridding the world of one more terrorist.