The Syrian immigrant “reportedly arrived in Germany in 2014 and had been granted a refugee status.” 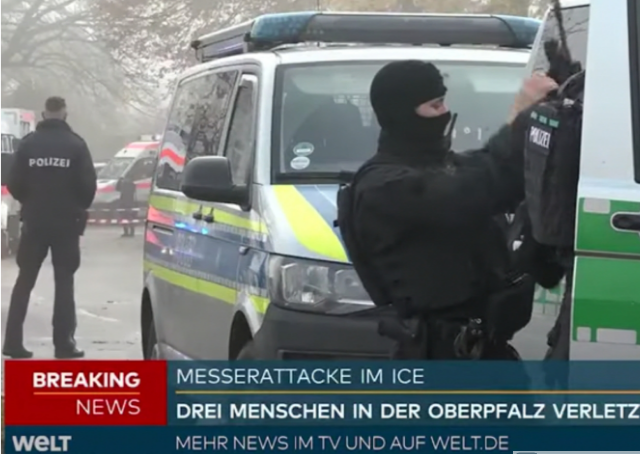 A Syrian refugee stabbed several passengers on a high-speed train in Germany. Three commuters suffered serious injuries on Saturday when a 27-year old knife attacker went on a stabbing-spree on board the train between the southern German cities of Regensburg and Nuremberg.

The attacker was nabbed on the scene by the Special Forces of the Bavarian Police, the media reports say.

The Syrian immigrant “reportedly arrived in Germany in 2014 and was granted a refugee status,” the German newspaper Die Bild Zeitung confirmed.

In keeping with the narrative, the German mainstream media remains clueless about the motives of the young immigrant knife attacker. “The motive for the crime is ‘still unclear and will now be determined,’ the German public broadcaster DW News reported, citing the country’s interior minister.”

The “attacker appeared to be suffering from psychiatric problems,” the news outlet added.

The DW News reported the details of the latest knife attack:

German Federal Police on Saturday said there was a knife attack on a train in the southern German state of Bavaria, resulting in several injuries.

The train was traveling near Neumarkt between the cities of Regensburg and Nuremberg at the time of the incident.

The Bavarian Red Cross said three people were seriously injured. None of the injuries are thought to be life-threatening.

A police spokesman told BR24 public broadcaster that the details of the attack were unclear, but that police had received a call around 9:20 a.m. local time (0820 UTC).

A 27-year-old Syrian citizen has been arrested, police said later.

The train stabbing is the latest in a series of crimes and attacks in Europe committed by immigrants from Muslim countries.

Earlier this month, a 25-year-old Afghan immigrant desecrated a historic church in the eastern German town of Nordhausen. “The refugee, who already lived in Germany for 5 years, dragged all the pews outside, robbed the altar in its entirety, ripped apart the music and organ books placed in the cupboards and did not even shy away from [laying his hands on] either the crucifix or the statute of Jesus,” Die Bild Zeitung reported last Monday.

Around the same time, a 37-year-old Muslim convert killed four women and a man in a bow-and-arrow attack in Kongsberg, Norway.

The attacks come as German Chancellor Angela Merkel is on her way out, and Europe is witnessing a new wave of illegal immigration. Unable to cope with the recent spike in illegal border-crossings, Poland and other eastern European countries are calling for tighter border controls.

With Europe once again failing to secure its outer borders, Afghanistan’s Taliban regime has threatened to unleash a new refugee wave towards the West. “Afghanistan’s new Taliban government has warned US and European envoys that continued attempts to pressure them through sanctions will undermine security and could trigger a wave of economic refugees,” the French news agency AFP reported last month.

To all you knee-jerk open borders types: You claim immigrants are the victims but who’s the real victim here?

Would love to know what Germans REALLY think about this.

Maybe they have thoughts of final solutions going through their heads again. Yes, I know. Nasty.

Those thoughts are outdated. Todays liberal Germans are thinking we should bring more muslims to our country. Today it is the muslims who have thoughts of final solutions.

That’s what you are going to get, a certain percentage of Muslim immigrants are going to go Jihad. Better learn to live with it because soon it will be happening here and not a thing you can do about it.

Well, there’s at least one thing we can do. That’s what concealed carry is all about.

“attacker appeared to be suffering from psychiatric problems,”

He was following in Mohammad’s footsteps, a cult of brutalities.

Good one.
The pussyfication of Germany is complete.
We are mostly willing victims. Even the police btw.

From the parents of Mia Valentin who had her face and life cut off by the man from Afghanistan whom her family took in as a refugee. He ended up fornicating with the 15 year old daughter of his hosts. When she ended the “relationship” he murdered her with a knife infront of a shop in broad daylight with many shoppers as witnesses.

In Freiburg a medical student was raped and then left to drown in a stream, face down. She too had been volunteering with “refugees”. The killer had been in jail in Greece for another attempted murder of a woman whom he left in a vegetative state after throwing her off a cliff.

In Dresden a gay couple on holiday was stabbed by an Arab. One of them died. Again murdered in broad daylight down town.

In Berlin it is normal for gays, Jews and lesbians to be attacked in Neukölln and Kreuzberg. Plenty of stones thrown, a knife to the thigh, assault, verbal assault.

10x WORSE THAN YOU THINK

The media withhold many stories. You will only see reported only those events that are so public that they cannot suppress them. Typically that means murder – generally of more than 2 people and/or in public. Rapes, human trafficing, theft and lesser crimes are generally not reported.

Therefore only about 1 of 10 incidents are reported by the media. Perhaps 1 in 20.

It is the same way media in the USA suppress crimes by protected classes like illegal immigrants and certain non-white racial groups.