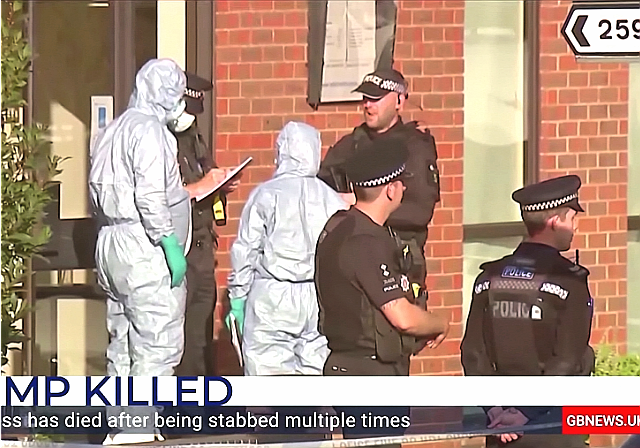 The UK police are investigating Friday’s fatal stabbing of a prominent Conservative Party lawmaker inside a church as an act of terrorism. The British Member of Parliament, Sir David Amess, was stabbed several times by a man of Somali origin while he was attending a public meeting at a Methodist Church outside London.

“The early investigation has revealed a potential motivation linked to Islamist extremism,” the Scotland Yard said in statement last night.

Amess, who began his political career during Margaret Thatcher’s reign and supported the UK’s exit from the European Union, was attacked during a regular constituency meeting at Belfairs Methodist Church, east of London. The 69-year-old father of five suffered more than a dozen stab wounds and died at the scene, the UK media reports disclose.

The attacker, repeatedly described by the media simply as “a British citizen,” was arrested by the police at the scene and a knife was recovered.

All our hearts are full of shock and sadness at the death of Sir David Amess MP.

He was one of the kindest, nicest, most gentle people in politics. pic.twitter.com/SIx6SZ1P3w

The British newspaper Independent reported the Islamist-link to the killing:

The fatal stabbing of MP Conservative MP Sir David Amess, who was killed while meeting constituents at a routine public surgery on Friday, has been declared as a terrorist incident.

The 69-year-old suffered multiple injuries in the attack at Belfairs Methodist Church in Leigh-on-Sea.

Essex Police said a 25-year-old man had been arrested on suspicion of murder and that counter terror detectives were investigating his motivations. The investigation is now being led by the Met’s Counter Terrorism Command who declared it a terrorism incident late on Friday night.

As part of the investigation, officers are carrying out searches at two addresses in the London area. The Metropolitan Police added: “A 25-year-old British man was arrested at the scene on suspicion of murder. He is currently in custody at a police station in Essex.”

Desperately sad news about Sir David Amess being murdered doing his job as an MP. Awful for his family and friends, this is a real blow to the democratic process.

Since the Taliban established the Islamic Emirate in Afghanistan, Europe is seeing the return of jihadi terror attacks on its soil. On Wednesday, a 37-year-old Muslim convert killed four women and a man in a bow-and-arrow attack in Kongsberg, Norway.

In what appears to be becoming a pattern now, the Norwegian authorities are treating the assailant as a lone-attacker with ‘mental health issues.’

“A man who confessed to killing five people in a deadly bow-and-arrow attack in Norway was handed over to the care of health services, a prosecutor said Friday,” German public broadcaster DW News reported on Friday. “But doubts have arisen whether he can legally be held responsible for the attack,” the news outlet added.

The Religion of Peace, at it again. Islam is a cancer

Well, my shocked face has the weekend off.

condolences to the mp’s family

An obvious win for Gun Control.

Has a national emergency been declared? Did they raise their DefCon levels? Go on alert militarily?

What was the government response? Besides sending armed police to protect mosques of course.

I think “church meeting” mischaracterises this. The MP was holding a ‘surgery’, basically a chance for his constituents to come and meet him in person and raise any issues for which they’d like his assistance.

These are entirely secular, and the use of a church will be because it’s a sufficiently sized community building.

The media in the UK have reported that the “British Citizen” is “of Somali heritage”. They’re very carefully not telling us whether he’s an immigrant or was born in the UK.

Nothing much will happen as a result of this incident. Another terrorist in prison, possibly more protection for MPs, but no changes to prevent people entering the country illegally from France, no reduction in legal immigration, nothing to stop the rise of extremism. Sigh.