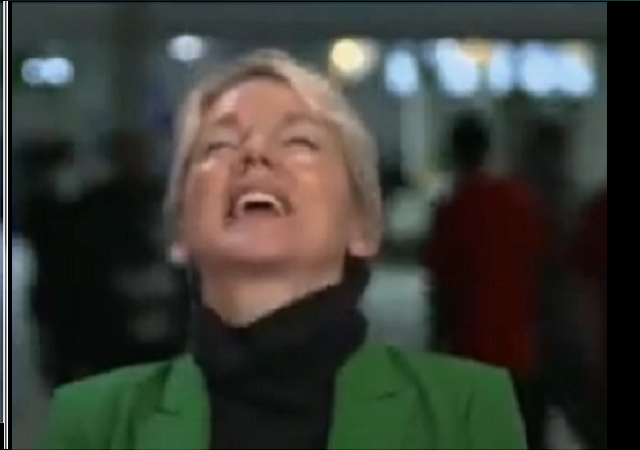 The last time we checked on Biden’s repellent Secretary of Energy, Jennifer Granholm, she laughed hysterically at the idea that Americans are suffering or that America has any control over gas prices.

She beclowned herself again today at a press conference, given to announce the release of 50 million barrels of oil from the Strategic Petroleum Reserve.

…Biden announced Tuesday that his administration was releasing 50 million barrels of oil from the Strategic Petroleum Reserve to help combat rising gas prices — hours before millions of Americans are expected to hit the road for Thanksgiving.

“American consumers are feeling the impact of elevated gas prices at the pump and in their home heating bills, and American businesses are, too, because oil supply has not kept up with demand as the global economy emerges from the pandemic,” the White House said in a statement. “That’s why President Biden is using every tool available to him to work to lower prices and address the lack of supply.”

The White House said the release had been coordinated with at least five other major energy-consuming nations — China, India, Japan, South Korea and the United Kingdom — and followed “weeks of consultations.”

Now 50 million barrels may seem like a great deal until you calculate the daily US oil consumption rate. You might think that an involved Energy Secretary would have that number memorized.

But this is the Biden administration we are talking about, where any competency displayed by an appointee is purely coincidental.

Energy Secretary Jennifer Granholm was left scrambling Tuesday to explain the positive impact of releasing 50 million barrels of oil from the Strategic Petroleum Reserve — admitting at one point she had no idea how many barrels are used by Americans each day.

“I’m curious if you know, how many barrels of oil does the US consume per day?” CBS News reporter Ed O’Keefe asked Granholm during the White House briefing.

“I don’t have that number in front of me, sorry,” Granholm replied.

“Some suggest it’s about 18 million,” O’Keefe responded, “which would suggest you are releasing less than three days’ supply from the petroleum reserve. Why is that enough?”

Team Biden also blamed rising oil costs on everything but its halting of pipeline development on the escalating energy costs.

Biden’s pressure on 14-nation OPEC and Russia to pump more supply into the global market has so far had little effect. The administration has blamed higher prices in part on the effects of the economy recovering and restarting from the COVID-19 pandemic. It has also singled out energy companies for alleged anti-competitive behavior. Biden last week asked the Federal Trade Commission to investigate whether “illegal conduct” is driving up prices at the pump for Americans.

And while this 3-day move ahead of the slow news Thanksgiving holiday may be a play for better poll numbers, it appears Biden’s questionable popularity is shrinking rapidly.

Take, for instance, this analysis in Politico:

Following the House’s passage of the social spending package on Friday, one Democratic strategist who advises major donors said, “Too late. We’re f—ed.”

The findings in Virginia fall in line with public and private polling nationally in recent weeks. Biden’s approval rating, a measure closely tied to a party’s performance in the midterms, has fallen to below 43 percent, according to the FiveThirtyEight polling average. That’s far worse than Barack Obama’s was at this point in his presidency, prior to the Democrats’ midterm wipe-out in 2010.

Generic ballot tests, pitting unnamed Republican candidates against unnamed Democrats, are also shifting in the GOP’s favor. More than 6 in 10 Americans say things generally are off on the wrong track, and similar majorities rate the state of the economy as bad.

That’s a poisonous environment for Democrats, and the remedy — if one even exists — isn’t clear.

How bad must it be if Biden has already lost Politico?

I think Biden and his minions are beginning to discover real numbers are essential.

Sadly, Fidiots in DC and Brussels have managed to restrict production and distribution of Natural Gas. The Dutch have even gone so far as to shut down an entire field of high pressure gas wells that were already drilled and connected to the grid.

The price and availability of NatGas has shut down fertilizer plants across the globe. India, Egypt, Britain, Holland, Russia and China are no longer producing any fertilizer for export. And, since 1/2 of 3rd world agriculture depends upon this imported fertilizer, they have set in motion a global disaster.

Next year’s harvest will be bad. The following year’s will be terrible. Like watching a derailing train, we see this catastrophe coming and are powerless to stop it. The train is carrying FAMINE. It will be Famine on a biblical scale across Africa, Asia, South America and even far Eastern Europe. And, misery and hunger will drive an unprecedented migration to countries that have food.

The Democrat policy of “never let a crisis go to waste” works so well for them (see Covid and Russia hoax) that the Dems have decided to manufacture crisis. Other than sheer incompetence – it’s the only rational explanation for Biden’s set of self-created crises Just wait. If there is a true famine the Progressives will ration food based on skin color – because EQUITY. And they will tell you any complaints are due to White Supremacy.

Ramping up the continued invasion of the US and Europe. Just As Planned.

Mzzzz Granholm may not know what she’s doing, but keep in mind, she is the first female energy secretary. That must count for something in this word of identity politics.

That counts for EVERYTHING in the new woke Democrat party.

Identity politics seems to be something the Democrats want. Maybe I should run for president. Once I’m elected, I will appoint an entirely white, mail, straight, Christian cabinet. I’d like to watch heads around me explode.

Don’t have to be all straight to make heads explode. Think Richard Grenell.

Very true. But, I threw that in just to see if anybody would notice. And, indeed somebody did. Still, the annoyance factor that I would provide to those who claim to speak for the “gay” “community” would be worth it.

No, you have to appoint some females, so you’ll have somebody in the office working while all the males are out on indefinite paternity leave.

Indefinite paternity leave? That’s a delibetate exaggeration. Pete said he would be back in the office just as soon as the boys are grown up.

It is not necessary to know anything in order to work for Biden since he himself, the great and wonderful, most powerful and impressive world leader, does not know anything.

Oh, come on. Most ambassadorships and cabinet secretary positions are filled by people that made appropriate campaign contributions, or worked hard for the campaign itself. It does not matter which branch of the party is in office at the time period most of those offices are just giveaways.

Isn’t there a regulation or law that says when the reserve is tapped it must be replaced? I don’t suppose it would be replaced by American produced oil though.

Isn’t there a regulation or law that says when the reserve is tapped it must be replaced?

Even if there is, Biden is such a genius he’d be replacing that oil at triple the price paid for the oil they just released.

Granholm led Michigan and the auto industry into the 2008 recession by not following the numbers she was seeing back in 2005. She’s the perfect example of failing upward.

I did a 2 minute DuckDuckGo search and found out the SPR has four sites and can only release at a rate of 3.5M bbl per day at best. Also under normal conditions, it takes over two weeks to get it out. Conditions aren’t normal. With supply chain conditions the way they are, the timeline will be doubled or more. What does that mean for a Thanksgiving present?

Biden was surprised to find out that gas prices were $4.29/gallon. Granholm was surprised that major homebuilders weren’t starting any new projects in 2006. What are the odds that they can grasp the complexities of supply chain and oil.

Granholm was surprised that she was asked any questions. She was not prepared to answer any questions and was unaware that her new job required her to actually do anything.

That says it all: she is a diversity/woke pick, with predictable deficiency in actual skills or ability.

Has Biden ever seen a grocery scanner? That would make it a hat trick.

I’m just as ignorant but in a different way.

The Biden Admin is full of people who have failed upward way past their level of competency from President Clueless Joe on down. Grandholm and Mayor Buttplug are two of the prominent know-nothings in this administration.

So the Peter Principle has been superseded by the new “Brandon Principle,” wherein we promote/elect people well past their level of inefficiency?

I thought that was Affirmative Action…

You just described most of corporate America. An MBA means an awful lot more than actual experience.

Mayor Pete could solve this. He loves nothing better than doing deep, exploratory crude drills.

The disconnect between the real world and the Administration flights of academic fancy is made clear every day. That the energy Secretary doesn’t know average daily fuel consumption as a stand alone figure is astounding. That she doesn’t know after, presumably offering advice to POTUS re the amount to release from reserves to increase supply and reduce price and while touting the release as a major action is frankly offensive.

It is another example of the complete ineptitude of this Admin. They are governing via press releases, polling and the dictates of progressive ideologues. The folks see it everyday in rising prices, brazen criminal conduct and progressive theorists given free rein to implement their pet policy ideas while everyday, ordinary folks are used as test subjects in their experiments.

She laughed because the plan is to have high gas prices, not to lower them.

“Now 50 million barrels may seem like a great deal until you calculate the daily US oil consumption rate.”
****
~2,5 days worth of consumption, 6.5 days of petroleum imports and 8.5 days of crude oil imports….just another, pathetic publicity stunt.

The Dhimmi-crats are obnoxious, stupid and narcissistic children, masquerading as adults.

She just knows what she wants oil production to be = zero.