Celebrating the 400th Anniversary of the First Thanksgiving

Celebrating the 400th Anniversary of the First Thanksgiving

An homage to the enduring faith and will of the American people. 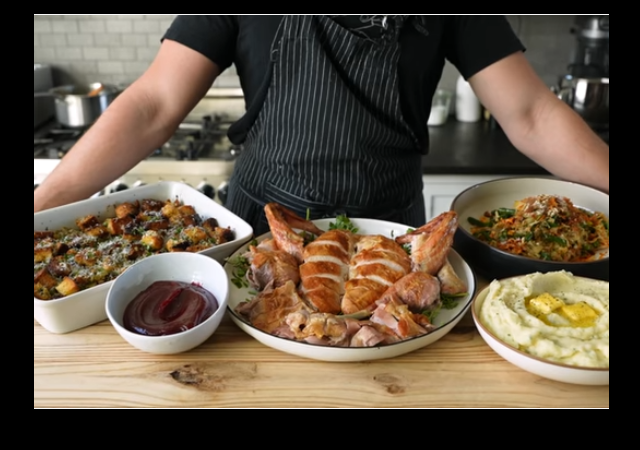 I hope that my Legal Insurrection friends are enjoying a turkey-filled day filled with mashed potato joy and pumpkin pie happiness.

As I reviewed what passes for the “news” today, I realized we are celebrating the 400th anniversary of the first Thanksgiving. Despite the fact that the meal was the culmination of the joint efforts of the Pilgrims and the Native Americans who guided them on planting and harvesting on these shores, the racialists in the newsrooms generate headlines such as ‘The gooey overlay of sweetness over genocide’: the myth of the ‘first Thanksgiving’.

We have experienced in the past few years (especially in the wake of the Trump administration and COVID), the trifecta of glitterati entertainment, progressive educators, and Big Media joining together to demean American culture and our national traditions. And there are few days on the calendar days more American than today.

The bible for the toxic distortions of Thanksgiving and the rest of our county’s past A People’s History of the United States by radical professor Howard Zinn. As noted by author Mary Grabar in her book, Debunking Howard Zinn:

…Marxism clearly influenced Zinn’s portrayal of this nation’s history and its free market system. For example, every era had its oppressors (i.e., white men) and victims (i.e., people of color and women). Grabar tracks down Zinn’s sources and demonstrates how he essentially lifted large swaths of leftists’ criticisms of America while blatantly ignoring credible scholarship that negated his points. She also shows how Zinn uses selective quotation of sources to convey the exact opposite message intended by the various authors.

A more robust look at American history gives a much more complex dynamic between settlers and the Native American tribes. For example, unless explorers had hit the shores after germ theory was discovered, infectious disease was going to hit newly exposed populations hard.

It is estimated that 90% of Native Americans died of disease that swept through the two continents after Europeans began coming regularly. The land was “widowed” rather than “virgin.”

Furthermore,the relationship between settlers, Native Americans, and the concept of land rights needs to be apprised with a more discerning eye.

Walter Olson, a senior fellow at the Cato Institute, questions the assertion that Thanksgiving should be viewed as an “Indigenous Day of Morning.” In his review of the literature, Olson argues that, as today, the Deep State was at the crux of most of the problems (emphasis mine).

In 2005 a young UCLA law professor, Stuart Banner, published How the Indians Lost Their Land, an extensively researched work that does much to correct the portrayal of white-Indian relations as a mere catalog of thefts, conquests, and usurpations.

As Banner demonstrates, the actions and attitudes of white Americans and their institutions have shown a full range of shadow and light, from extreme wickedness and ignorance to as much grace, goodwill, and foresight as could have been expected under the circumstances.

Tracing the many twists and reverses of federal Indian policy, Banner notes that it was usually anything but obvious which proposed measures would truly serve the interests of aboriginal inhabitants, that nearly all major changes in policy enjoyed support among some Indians and Indian-friendly white reformers, and that most of the major disasters to afflict America’s Indian population were either unforeseen or not well controllable by the central government.

I would like to conclude on a positive note. I took several trips this fall, and I noted the number of school age children with their parents on nature hikes or at cultural centers (e.g., Dinosaur National Monument and Colonial Williamsburg). It is clear that Americans aren’t accepting the revisionist history, and are pulling their children out of what has evolved into Marxist conscription schools.

According to the most recent report by the state’s Division of Non-Public Education (DNPE), homeschooling numbers in North Carolina exploded during the pandemic.

If this trend continues, it will be a testament to the enduring faith and will of the American people. God bless and keep all of you this holiday season.

I am thankful for Professor Jacobson, his editors, contributors and what’s left of this country.

To be historically accurate, the first thanksgiving was in 1585 in Flotida

Correction! September 8, 1565 is the actual date of the first Thanksgiving in St Augustine, Florida.

I’m thankful that I and my family have beaten Pestilence this year.
Famine is apparently next up at bat.
Then there will be only War and Death to go.

Beating Pestilence is indeed good. However, I could use a little Famine at this point.

Ty Leslie,, just finished my pumpkin pie.. although this year we skipped on the mashed,, that left some room for extra stuffing. I have priorities.

Happy Thanksgiving to everyone here at Legal Insurrection. Counting blessings is more productive than cursing at the tv… and the fools who are leading this country.

I am alone this Thanksgiving night. I am watching DVDs of the detective series “endeavor“. For dinner, I had to make some thing that I could fabricate with one hand. I grilled hamburger patty, then covered it up with hutch chili and beans, with shredded cheddar cheese. It’s called a chili size. Those of you from Southern California above a certain age will know exactly what I’m talking about. All that was missing was the grilled hamburger bun.

You may be alone but I’m thinking of you.

I appreciate that very much. Thank you.

…or who ever ate at an IHOP!

I didn’t know that IHOP had chili sizes.

(I’m certainly glad that a restaurant exists where one legged waitresses servers can work.)

My mistake. It was Big Boy.

I’m dealing with a slight excess of family gratitude myself and have a sneaking envy of your chili size solitude. Thinking of you and others who may be celebrating in solitude.

I have become accustomed to my solitude over the decades. There are times I would like to be with people, but this evening, I was not able to drive, nor did I want to walk to a neighbors. It’s a matter of a balance tissue walking on a steep hill and only having one arm to swing. The other one being bound up in this big dog paw style bandage is not helping.

Progressive lies and distortions abound. They infiltrate and alter or destroy our institutions both public and private. What the progressives can’t do, yet, is control our civic traditions. Which is why they seek to undermine and distort their history.

IMO, so long as we refuse to accept their false narratives, celebrate our traditions while teaching our Families their meaning and importance we won’t lose. We must reinvigorate our Nation from the bottom up. Starting with our Families, our friends then our local governments and schools. Only from a secure and stable base can we then join with others to reclaim our States and the Nation.

I’m celebrating the end of the first socialist republic in America, and the fact that it took such a short time for its citizens to realize their error and revert to private property and a free market.

Haven’t decided yet what I’m having for dinner, but it definitely won’t be pumpkin pie, and if it involves sweet potatoes they will not be “enhanced” with sugar or marshmallows. They’re sweet enough already, thankyewverymuch. I’ll likely just bake one plain in its jacket, like a normal potato.

When did that happen?

Its a pleasant thought. It’d be nice if it were true.

It happened, in 1621. The Plymouth colony started out as a commune. It took them one year to realize what a disaster that was. That’s why they almost starved to death. They distributed the land to the people and introduced a free market, and they thrived. Hence Thanksgiving.

I thought you were thinking people had come to their senses after seeing Biden’s administration in action.

Actually, it wasn’t the first. The first Jamestown colony performed the same experiment, but didn’t eject in time.

I hadn’t heard that that was what happened to them, but it would certainly explain it.

It’s like the old joke about how you can make a small fortune in Israel: Arrive with a large fortune. (That joke shows how old I am; I remember when Israel was a socialist country.)

So then, same as unemployment.

“Haven’t decided yet what I’m having for dinner…”

You’re keeping me in suspense Milhouse. So what did you have?

I agree. I’m waiting to find out what Milhouse had for dinner.

I’m sure someone here on L I will give him a downtick for his choice.

I ended up deciding to go out for dinner, and had a turkey panino.

Not so young any more…

Was panini a yuppie thing? The whole thing kind of passed me by; I think this may be the first time I had one. It was nice, but nothing special. Just a few slices of lunchmeat-type turkey in a baguette, with mustard and pickles, toasted in a press. While enjoying it I kept thinking that for a third of the price I could have gone across the street to the grocery and bought a package of turkey slices and a baguette, and toasted it in the toaster oven. Sure, it wouldn’t be pressed, but it would be almost the same.

“Native Americans who guided them on planting and harvesting”

The natives were hunter/gatherers. They did not sow. They had no plows, they hadn’t domesticated any animals either.

They had shown the Pilgrims maize, what we now call corn, but it was the Pilgrims that were the first to plant it.

Nope. They were farmers. They cultivated corn, beans, gourds, and tobacco, and moved on when they exhausted the land.

Bradford wrote that they “began to plant their corn, in which service Squanto stood them in great stead, showing them both the manner how to set it, and after how to dress and tend it. Also he told them except they got fish and set with it, in these old grounds, it would come to nothing.”.

Squanto and his people ate the same food the year before the settlers arrived and no doubt they were thankful.

am thankful to be celebrating our twenty-fifth thanksgiving here at the ranch, here under the lone star–am thankful for so many of our countrymen who, amidst this last year’s darkness, have stood up and begun lighting torches to remind us of our path, to once again point the way, to carry the light

may the almighty continue to bless us as we reawaken to ensure the original purpose of america: freedom

For those still behind enemy lines in the PDRK, many are thankful for being close to America. The WALL has not been built ….yet.

Great essay! If you want your kids to be proud of being Americans-take them on a freedom tour-which is what I call the great sites of American history and the citadels of our country . Go to Bunker Hill, Lexington, Concord, Valley Forge, Gettysburg and Independence Hall, and the military academies. Go to Washington, and tour Congress, the SCOTUS and the White House and the great monuments-but beware of the woke narratives that you will encounter.

We did that with our 10-year-old: a one-year round-the-US RV tour. Rather than explain America to him in terms of governments and battles, we tended to focus on “citizens’ monuments”…

It was an American man-on-the-street culture tour, more than anything else. The good news is that he’s in the thirties now, and never had a “liberal phase.”