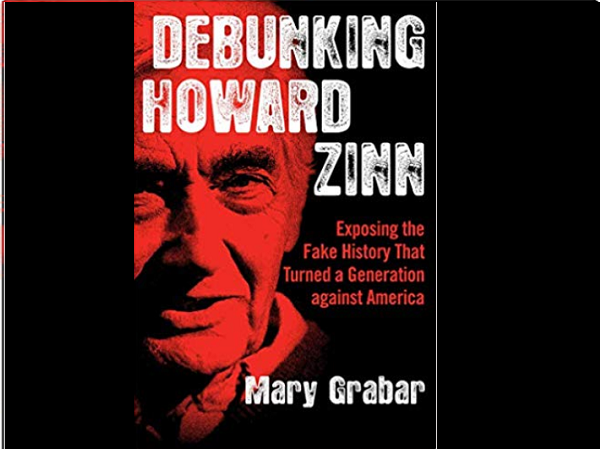 Legal Insurrection has covered the replacement of serious historical scholarship with anti-American and anti-capitalist revisionism since its inception.

The bible for this toxic distortion is A People’s History of the United States by radical professor Howard Zinn. Sadly, the book still holds a place in the 100 bestselling historical teaching and books on Amazon.

In the early days of College Insurrection, Mary Grabar, a resident fellow at the Alexander Hamilton Institute for the Study of Western Civilization and the founder of the Dissident Prof Education Project, wrote a post focusing on why the progressive academic elites loved Zinn’s work.

Now Grabar has written a compelling book that offers the scholarship lacking in A People’s History of the United States: Debunking Howard Zinn – Exposing the Fake History That Turned a Generation against America. Not only is Grabar’s book a thoroughly researched and exquisitely compiled refutation of Zinn’s book, but she covers the historical analysis in an approachable, flowing style that keeps you fully engaged with her discussion.

Grabar demonstrates through her research that Marxism clearly influenced Zinn’s portrayal of this nation’s history and its free market system. For example, every era had its oppressors (i.e., white men) and victims (i.e., people of color and women). Grabar tracks down Zinn’s sources and demonstrates how he essentially lifted large swaths of leftists’ criticisms of America while blatantly ignoring credible scholarship that negated his points. She also shows how Zinn uses selective quotation of sources to convey the exact opposite message intended by the various authors.

There are so many great sections in this book, it was hard to pick one to share. However, as I have an interest in World War II history and the development and use of the atomic bomb, I chose one that shows how Grabar deftly addresses Zinn’s assertions that the use of nuclear weapons on Hiroshima and Nagasaki was racist.

“If only,” Zinn wails, “the Americans had not insisted on unconditional surrender—that is, if they were willing to accept one condition to he surrender, that the Emperor, a holy figure to the Japanese, remain in place—the Japanese would have agreed to stop the war.” Then Zinn launches into full conspiracy mode: “Why did the United States not take that small step to save both American and Japanese lives? Was it because too much money and effort had been invested in the atomic bomb not to drop it?”

In fact, the insistence on “unconditional surrender” was intended to prevent remilitarization of a nation that had sought “world conquest,” as the Potsdam Proclamation of July 26, 1945, stated. Zinn ignores this fact and presents U.S. unwillingness to allow a “holy figure” to remain on his throne as the only stumbling block. Germany had surrendered, but the Japanese would fight to the death, as evidenced by the increasing use of kamikaze fighters and villagers committing suicide instead of surrendering. Zinn ignores the fact that the Potsdam Proclamation, which demanded unconditional surrender, also promised “eventual establishment of a ‘peacefully inclined and responsible’ Japanese government ‘in accordance with the freely expressed will of the Japanese people.’” The Japanese rejected this offer on July 28. And in fact, when the Japanese did surrender, Hirohito was allowed to “remain on his ancestral throne as nominal Emperor.

There are many other gems of real history in the treasure trove of knowledge that is Dubunking Howard Zinn.

I give it 5 stars out of 5, and as it is already September, I will suggest that it would make a great gift for anyone who loves politics, culture, and history.  I also recommend giving it to college students who are being forced to study Zinn’s work.

Thanks for the recommendation, Leslie. I’ve ordered a copy for my grandson who plans on being a history teacher.

I’d also recommend a collection of John Adams’ and Thomas Jefferson’s later-life correspondence, in particular a series of letters where they discussed narrative-making in the writing of histories.

“. For example, every era had its oppressors (i.e., white men) and victims (i.e., people of color and women).”

The “people of color” must only be men, and the women only white?
This is beyond parody, defining people by color/lack of color.

It either elevates or diminished a person.

E Pluribus unum.
We would do well to remember that.

“…and villagers committing suicide instead of surrendering.”

Which villages on which islands?

There were many cases of Okinawan women throwing their babies off cliffs and jumping themselves. They had been told by the Japanese High Command that the US Marines would eat their babies addition to them.

Their reasoning wasn’t from patriotism but fear.

Every single academic in America knew at the time this was nothing but plagiarized, regurgitated communist propaganda. But it served their interest in pushing left wing causes. I remember when it was taught as a joke. …But the current generation of fools in academia actually believed his fake, inaccurate, totally absurd rendition of history.

In the 1970’s I happened to be a PoliSci major at Boston University when Howard Zinn was the Chair of that department. This was back in the day before “metrosexuals” and “skinny jeans” and “soy boys” were in the parlance, but their predecessors used to follow Zinn around campus like ducklings following their mother. Bedecked in “Che” t-shirts and (sometimes) berets.

At the time I dismissed them as “useful idiot” holdovers pining for the then-over 1960’s demonstrations and radicalism. Little did I know that they were the future journalists and academics of America.

IMHO, Collectivism in all its forms — Socialism, Communism, Fascism and Progressivism — is, at root, a Satanic evil. The folks I used to consider “useful idiots” still are — they just don’t realize that they are “useful idiots” in the service of a much greater evil.

Don’t wait to give it as gift for college students! Give it to the high school students.
Or even middle school!

Howard Zinn’s book turned one of my dearest friends into a rabid leftist Social Justice Bully. I will send him this book in the hope that he is not yet too far down the rabbit hole. I hope your review is right and this author has done a convincing job.

The thing about Zinn is poornpeople like my grandparents keep showing up and their kids get rich.

Poor people. Not what i said.

I used to be married to a japanesen woman. Actually she was half Okinawan which isnt the same thing. My ex had a grajdfather who was delighted when we (the big we; not me.personally obviously) let him out of the EPW and started hiring.

The Tokyo side of the family was also happy their ancestorrs got to surrender to Americans before the Russians showed.up.

Labrat. Grr8 American. Back in the 1970s i learned to face my fears. Also known as playing rugby. I grew up around Sailors and Marines who were terribly maimed and horribly burned. It is kind of desensitiving to grow up in a Naval Regional Mediucal center during or just in the aftermath of.a war.

Natch, signed up. Because do you think some amateur is going to be able to put up with the BS? Also was an instructor. Which means i treasured your sons and daughters like you would hope an officer would.

>>I grew up around Sailors and Marines who were terribly maimed and horribly burned. It is kind of desensitiving to grow up in a Naval Regional Mediucal center during or just in the aftermath of.a war.

Funny you should mention that. I was a Navy brat; when I was in 6th grade my father was stationed at the Great Lakes medical center; we lived on base in housing behind the hospital. It was 1967-68. Sometimes I’d chat with guys recovering who would sit out in the little park behind the hospital — often missing limbs. I was in awe of their resiliency and bravery in the face of such losses at such a young age (at that age I don’t think it occurred to me that having seen comrades die, they may have felt themselves to be relatively lucky).

This experience, plus the then-culture of growing up watching John Wayne movies and Andy Griffith and such on TV, helped inoculate me from what later came at BU. I slipped through its quality control and did not become a Leftist (reading “Gulag Archipelago” on my own one summer during that period cemented my patriotism, making me realize that no matter the faults of our country, it is the best on the face of the earth, and I am blessed to have been born here).

Coming out of college during the Carter years, and having read about the deterioration of the military post-Vietnam, I never enlisted / served. One of the great regrets of my life — and my genuine admiration to those who did not shrink from that during the Carter years; with the benefit of hindsight, I declare that you were better people than I.

I like reading the comments of people with a brain. One thing I notice is how all this can be dieclt tied to the modern DNC. Fear (global warming) the division and hate its white, Christian, and male that are the root of all evil on the planet. The more things change the more they stay the same.