“if journalism is not objective, it’s not journalism — it’s propaganda” 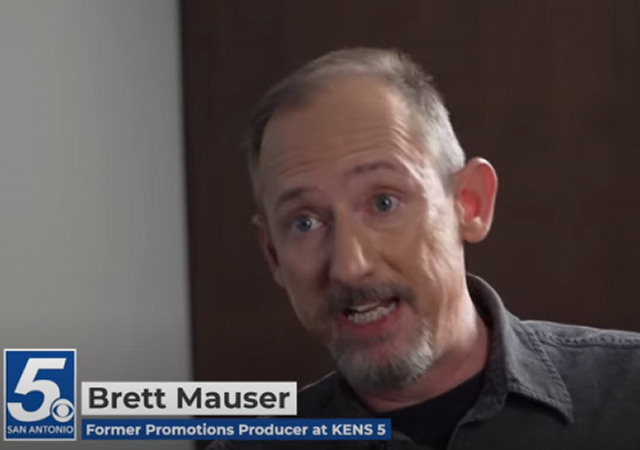 In higher education, diversity administrators act as judges, in a sense. They decide what is acceptable speech, what is an acceptable amount of diversity, and have great influence over real policy.

This model has apparently moved into media as well. I guess we shouldn’t be surprised.

Project Veritas has released an interview with a man who has worked for a CBS affiliate, and he says diversity officers are now influencing journalists and telling them to stop trying to be objective.

That the media wasn’t objective is something we already knew, but thanks to Project Veritas we now can see proof that objectivity is actually being pushed out by the companies who bring you the news.

A whistleblower named Brett Mauser came to Project Veritas from the CBS affiliate in San Antonio (KENS 5) and delivered shocking footage of training and instruction efforts from the station’s parent company Tegna, a company that owns CBS affiliates in San Antonio, Houston, and 62 other news stations across the country…

Christina Karaoli Taylor of CKT Cultural Strategies is described as a “multicultural competency trainer” and was brought in to train the San Antonio journalists on the new way of doing things.

“Much of what we’re gonna talk about today is going to center around the main code of ethics of journalism. And a couple things — during this workshop and throughout your day, I challenge you to stop thinking in terms of objective journalism. We’ll discuss why that’s not really feasible anymore. But [think] in terms of accuracy, fairness, and transparency — always striving for objectivity is not feasible,” Taylor said.

In the video below, the whistleblower comes right out and says this is propaganda, and he is right.

“That was the one that blew my mind. Teaching journalists at a national level, ‘Don’t be objective.’ To me, that was what journalism always was: to be objective. In my mind, if journalism is not objective, it’s not journalism — it’s propaganda,” Mauser said.

“To me that seems like — that’s part of the job. That you need trust to be able to do your job. Your job is to inform. If you can’t trust who you’re getting the news from — you’re not doing your job,” Mauser said in response to watching Treviño’s statement.

The irony of all of this is that most people already don’t think the media is objective.

The diversity officer is missing the point. The journalists already report whatever will produce the most clicks from their audience. Soap opera is what diversity officers do, and that’s what journalists report. It has nothing to do with objectivity except as a genre cover story.

If that were true, they would offering true news. Half the country is spontaneously chanting, ‘Let’s go Brandon’. No they don’t mind the clicks, what they crave is the approval of the woke mob. They need to be seen like the Puritans of old ostentatiously mouthing the shibboleths.

As an ex-journalist, I can tell you this is not entirely correct. They report whatever they think you need to know, and what you need to know is leftist bullshittery. They do not care about you or your clicks because they have a captive audience. That audience is dwindling and fragmenting, which I think is good. But it hasn’t happened fast enough to change anything. If the media wanted more of an audience, they’d change. I can’t think of a single media outlet that has changed its coverage, which has resulted in a skyrocketing customer base. Ratings and subscriptions matter, but if they have money coming in from elsewhere that keeps them afloat, they don’t matter as much as you think. Why do you think, say, ViacomCBS owns entertainment streaming channels, or anything outside of just plain ol’ CBS News? They rake in billions of dollars they’d never have if they just had their crappy news programs, which keep losing viewers every year. Do dwindling viewers change CBS news coverage? Nope.

“You’re all caught up”

I disagree. If all they wanted was clicks, they could have gotten a lot of mileage out of headlines like, “Black Lives Matter Protesters Looting and Burning Cities”

But that’s something they’ll never say. It’s not allowed.

Any journalist with an ounce of integrity has to push back HARD against this. I know the REAL journalists of 20+ years ago would have called anyone “nuts” if they said to not be objective. Editors used to FIRE those who were dumb enough to suggest such a thing – let alone act on it.

This is CRT for journalists. Looks like a bunch of moms have more BALLS to fight this nonsense than most journalists.

And the reason why is simple: journalists get paid, moms pay.

BK – With respect, I think your view on journalists is naive. You give them too much credit.

Journalists are overwhelmingly persons who seek to further their holy leftist cause. They gravitate to “journalism” because it provides a means to get paid and recognized for advancing the leftist narrative. The “news” outlets we are all familiar with don’t hire a journalist despite their non-objective writing, they hire them BECAUSE of it. Journalists don’t seek the “balls to fight this nonsense..” They view your nonsense as enlightenment, and are attracted to it. They generally want to be praised for spreading that gospel.

If I gave you a dollar for every “objective” journalist you could name, you still would have enough $ to buy lunch.

How many of these alleged journalists will have integrity to quit? I think we all know the answer to that…

For those following along at home, and on a completely different topic, my biopsy results came back and I am pleased to report that everything they tested was negative. All that’s left now is the skin grafts; that will be Monday. Those who have sent me a good wishes: thank you very much, they are greatly appreciated.

I’m happy for you! Will now pray that the grafts go well.

Earth, I just got further good news! It turns out that the amount that they took out of my hand was born sufficient to make sure that I likely will not need radiation. The space between the periphery and where the cancer begins is why they know that the surgeon believes no radiation will be necessary. Time will tell, but I believe he is right. The skin graft procedure is not going to be a walk in the park, and I’m not looking forward to doing bandage changes because it will look rather revolting. But, all part of life. I guess I will have to cancel my modeling contract with Jergens!

Maybe you could try modeling for Victoria’s Secret?

Tell Jergens you have a “trans hand.”
Menacingly.

Colonel I’m not sure what the better dressed bears are wearing for the season.

CNN hasn’t been objective for 30 years.

Yup. At least since the days they were making excuses for Reno slaughtering children in an government sponsored inferno

That was one of the times that CNN was in favor of law and order. Do I really need a sarcasm tag?

When Turner sold to Time Warner, that was the end of CNN.

Curiously, the same thing that was the end of AOL.

I am considering hiring a Pole, a Russian, a German, an Italian, a Greek an Algeria, a Tunisian, and a Romanian is that enough diversity?

We need to work on taking that work back to force them to advertise more openly as the race obsessed nutcases they are.

Color, sex, age (e.g. parent/hood), gender, and transgender (e.g. homosexual), too, social stature, economic standing, etc. But, no People of White, no People of Asia (including Russians, Indians), no People of Male, and other taboo blocs.

Providing that they’re all Marxists, it should do.

Couple of points:
1) If you can discern how the “journalist” feels about the subject, it isn’t journalism.
2) Look at the adjectives. They give it away. If you want to write objective prose, you have to severely limit the adjectives. For certain, parse them.

I especially have a problem with reporters who write – “without evidence” – after quoting a source that makes a statement that they disagree with.

First – you’re quoting a primary source – that person does not need to cite reports and data – they are a primary source. They are EITHER giving their opinion or their believe of facts. YOU, the journalist can get off your ass and find actual sources to quote that dispute the person you quoted. Otherwise the “without evidence” is just your opinion – unless you actually ask the person if they have any evidence to support their statement and they then say “no” – then just quote that they said they had no evidentiary basis for their statement. Hard to believe any interviewee would admit to having NO evidentiary basis for their factual statements – but it could happen. As for their opinion – no evidence need for that.

Evidently no CBS diversity officer had the training to impart how to follow a bus full of jurors – on the cbs journos.

that was nbc….clearly they need more diversity of following techniques

Some day, I gotta treat you to lunch.

My signature line at another site used to read as follows, “be kind to animals. Take a grizzly to lunch today!”

I have a meme of two bears pointing at one of those stick figure family decals and saying “Look, a menu.” Unfortunately I can’t post images…..

We were able to draw the conclusion from observing the product.

Well lucky for us nobody watches the news anymore.

These assertions by a former employee are a severe misunderstanding of what valuing inclusivity, diversity and equity in a newsroom means. This lack of understanding is exactly why we’re doing this training. A non-news employee secretly taped inclusivity training where our journalists were given tools and information and shared perspectives on how we can better serve all our audience.

Guess we can’t believe our own lying ears and eyes.

Wow. They are good at shoveling the BULLSHIT.

“Secretly taped” and *gasp* REPORTED on it to the public.

Thank you henrybowmen !!
What do any of the above stated goals have anything to do with reporting honest and objective news? This statement from CBS underlines all that is wrong with reporting today. A JOURNALIST is non-partisan, honest, and does not repeat innuendo or hearsay. Your “audience” and income are not the goals of news reporting when sensationalism, half-truths, biased statements and outright lies from unconfirmed sources spew forth from your fevered imagination. A true journalist has integrity, truthfulness, and reliable sources of information.

am old enough to remember a lecture from an rtf professor who said, when writing a genuine news item/story, a reporter’s responsibility is: ” to fix the time, place and event with accuracy and precision such that text was kept to a minimum and void of any personal opinion. ”

those were the days

We need to alter our vocabulary. They are not journalists. They do not give us news. They are corporate propagandists who give us propaganda.

A blogger pal of mine refers to them as the “DSM” — the Duranty/Streicher Media, in honor of Walter Duranty and Julius Streicher.

Duranty, BTW, was another Pulitzer winner.
A Pulitzer is a lot like a kiss on Jesus’ cheek, isn’t it?

Instead of “diversity”, how about not bothering Whites?

When have journalist been objective? They work for news corporations and I believe are instructed by their bosses as to how to write or speak their news story and if they don’t then their’s the door.