Brenda Sheridan has become the poster-adult for claims of abusive school board conduct. 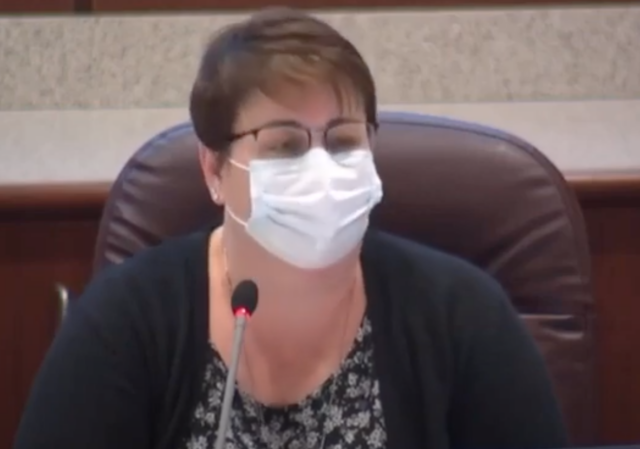 If you’ve ever tuned into one of the now-infamous Loudoun School Board meetings, you might be wondering who it is you’ve heard calling the names of speakers for their 60 seconds — and not a millisecond more! — of public comment time at the podium. The voice is smug, bureaucratic and completely unmoved by the plight of parents who appear before the board to plead for an open dialogue about what’s best for their children.

Well, that’s the voice of Brenda Sheridan, head of the school board and, seemingly, a staunch opponent of parents, honesty and transparency. Sheridan’s perceived disregard for the rights of parents has led to a grassroots movement by the residents of Sterling, VA, the area of Loudoun that she represents, to have her removed from office.

Ian Prior, head of the parents group Fight for Schools, which filed petitions earlier this week containing approximately 1,859 signatures, explained why residents took this action:

“As Chairwoman, Brenda Sheridan has overseen and personally contributed to a complete breakdown in trust between the community and the Loudoun County School Board. From violating open meetings law to ignoring the school board’s code of conduct to neglecting to keep our children safe, all for her activist causes, Sheridan has been nothing short of a disaster as the so-called leader of Loudoun County Public Schools.”

The case against Sheridan includes her alleged participation in a private Facebook group that looked to start targeted harassment campaigns against teachers and parents who spoke out against the teaching of Critical Race Theory in the county’s classrooms. Since this allegation surfaced in March, Sheridan has led a radical, partisan school board that has made national headlines for shutting down parent comments at meetings, instituting procedures that placed further restrictions on the First Amendment rights of parents, and, worst of all, allegedly covering up the sexual assault of a freshman girl by another student in a school bathroom.

“Let this serve as a message to the rest of the board and Superintendent [Scott] Ziegler: if you thought that this was all about an election, then you have once more failed to properly judge the resolve of your constituent. We re still here and we’re not going anywhere.”

Not only are the parents not going anywhere, but the incoming state attorney general, Republican Jason Miyares, has vowed to investigate the alleged wrongdoings in Loudoun County Public Schools. The writing seems to be on the wall for Brenda Sheridan and her fellow board members, who’ve felt emboldened these past two years to shut down schools, isolate children, silence parent voices and embrace radical, anti-American teachings.

Watch this space for the latest developments.

Maybe, tar and feathers are in order?

So long as the tar is hot.

I’m a firm believer in the 21st century equivalent: superglue and packing peanuts.
If you’ve ever poured any quantity of superglue on your skin, it will satisfy your expectations in terms of heat.

A low-trust society is, in fact, desirable. Sadly, the blue-tattooed have complete trust in their party’s slate.

Talked to my 103-yo mother today. Lots of griping about high prices, and zero idea how they got that way or who was working hard to make all these bad things happen. When I informed her, she backed behind the excuse that she only paid attention to the state and local news on TV. (No Internet, even the TV remote is a source of confusion.)

I told her I had a quiz for her. I told her the story of her own state’s governor bracing Biden for night-dropping criminal illegals into his state, and threatening to give them all bus rides into Biden’s district in Delaware. Then I asked her if she had heard anything about this story on any of her news channels.

Most of us who know our way around the intertubes have no idea how complete a grip the censorship and propaganda machine has on the vast majority of Americans.

We must again thank President Trump for making all these lunatics reveal themselves. TDS has been cleansing. Now we need to start the purge.

Send them in leaky boats to Cuba.

I was wondering why they would be filing the petition with a court, but that’s how it works in VA. There’s no recall election. 10% of the number who voted for that office at the last election can file a recall petition, and the person is then entitled to a trial by jury; if she loses she has the right of appeal to the state supreme court. It’s up to the court whether to suspend her pending the trial.

I honestly cannot fathom why anyone would downvote a concise summary of the legal procedure behind this news story, but as we’ve seen repeatedly a number of commenters here seem to have a grudge with reality.

I don’t think removal from office is anywhere near adequate punishment for this woman’s misdeeds, but I have no idea what legal recourse the parents might have. Is there some civil equivalent of fiduciary misconduct? The petition references violating open meetings laws, which seems like it ought to carry some kind of penalty.

Sheridan sounds like a true apparatchik of the left, an experienced Marxist Kool Aid drinker.

A good shunning by the community would be the minimum this cow needs. A good review of past indiscretions and follow up prosecutions should follow.