Careful, Biden: “Politically speaking, anything that could get in the way of the propane supply ahead of winter could play badly in Midwestern swing states.” 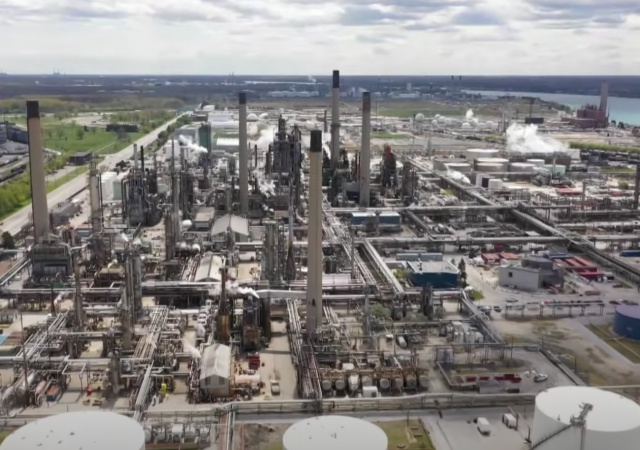 The Biden administration is getting criticism from a lot of people because they might shut down a Michigan pipeline as energy prices soar across the country.

The Republicans and Canada warned closure could lead to more expensive energy prices. Even with the line open we face higher heating bills this winter:

Word that the Biden administration was quietly studying the potential market impact of killing the Line 5 pipeline, first reported by POLITICO, set off a firestorm of criticism from Republicans saying the move would worsen the spike that has already driven propane prices up 50 percent from a year ago just as Michigan residents — the nation’s biggest consumers of the fuel — stock up for cold weather. Propane is stripped out of the line at the small port city of Escanaba to help feed supplies to communities in the state’s Upper Peninsula.

“As we enter the winter months and temperatures drop across the Midwest, the termination of Line 5 will undoubtedly further exacerbate shortages and price increases in home heating fuels like natural gas and propane at a time when Americans are already facing rapidly rising energy prices, steep home heating costs, global supply shortages, and skyrocketing gas prices,” Rep. Bob Latta (R-Ohio) and a dozen other congressional lawmakers representing the region said in letter to Biden on Nov. 4.

Energy Secretary Jennifer Granholm, a former Michigan governor, justified the closing because heating prices “will be more expensive this year than last year” even if they shut it down.

Then again, Granholm doesn’t care that people cannot afford to gas up their cars.

All this means that Biden, who promised at the COP26 climate talks that the United States would be “hopefully leading by the power of our example,” is facing the sort of cold, hard political decision that such grand climate ambitions can force on a country that is the world’s top oil and gas producer, said Kevin Book, managing director at energy consulting firm ClearView Energy: Either keep the pipeline in place and disappoint progressives, or revoke its permit and hand Republicans fresh ammunition just after they shellacked Democrats in Virginia and other state elections.

“When fuel prices are high, it may not matter what project gets stopped so much as the White House is seen stopping it,” Book said. “Politically speaking, anything that could get in the way of the propane supply ahead of winter could play badly in Midwestern swing states.”

Canada is not happy:

Canada Foreign Affairs Minister Mélanie Joly discussed the pipeline with Secretary of State Antony Blinken on Thursday, according to a readout of their call. The Canadian government recently invoked a 1977 treaty to bolster its position that the oil continue to flow.

“Certainly it is prudent for governments at all levels to be thinking about what happens in the event that we are not able to resolve the issue with Michigan and we’re not successful in the court,” Wilkinson told reporters. “But I would say that, that is a contingency plan that we hope never to have to use.”

They really, really hate us. This is warfare against those who do not live in apartments and condos in big cities. Heating small homes will break people’s finances this winter.

Maybe tin foil headgear territory but remember the OSHA deadline to get the jab is 4 January 2022 (assuming it’s not blocked). Right in the middle of winter. Would not surprise me in the slightest if some of these folks are making the calculation that people won’t risk losing the ability to heat their homes.

Well, since most utility companies won’t turn off service even for non-payment during the winter when the temperatures are beneath certain thresholds that’s a bad bet.

While that is true- if the distributor has no heating oil or propane to deliver- it’s not getting delivered, No matter how badly you need it.

And when the distributor gets some- it’s going to be paying customers first- unless the government has stepped in with a rationing program to make things worse.

There is plenty of LNG in Louisiana but there are no US flagged tankers to deliver it to the Northeast. The US LNG is going to Europe hopefully freeing up orders from Trinidad/Tobago to Boston, Philadelphia and NYC. Regardless, poor old folks are going to shiver in the dark and it’s all Biden’s fault.

Not only will heating your home become next to impossible, the gas shortages will result in food shortages. The BidenBelowtheBeltBlow==starve you and freeze you out at the same time!! Heck, even the underpasses won’t be available–Alfred E. Neuteredman will see to that!!

I hope they shut it down – show everyone that the “Green Dreams” mean the complete destruction of their lives and their communities.

Sometimes the only teacher is experience.

Pain is one hell of teacher!

Wow, so when we already are at all-time high pricing, let’s constrict supply even more to drive prices up even further. It’s like these stupid communists learned about economics from a crackerjack box.

Socialists live in Bizarro World. Every day is Opposite Day. Really.
Their slogan, Build Back Better? Hint: their real program is the actual opposite of building… anything.

Their slogan is Tear Down and see if you can build anything back with Chinese material and illegal workers.

“It’s like these stupid communists learned about economics from a crackerjack box.”

They will starve the cities. Rural areas need a different kind of blockade. This is all part of an escalating agenda.

So Canada is officially upset about this while the Trudeau government is doing everything in its power to wreck the oil industry in the Canadian west, particularly Alberta, and that also includes pipelines?

Beat me to it. Canada is about as upset about this as the Biden admin.

Do they have folks specifically looking for way to make things worse? They’re pretty stunning at it…

Let’s wreck the economy of 2 countries…progress!

Good! If I am going to live in a cave, I want it to be a cave on a nice cool planet. Besides the animals will have warmer thicker fur for clothing, will have more body fat and be easier to spear. I just want the best parts of living before civilization.

It doesn’t matter how much the price of gasoline or heating oil goes up. The ruling class will never suffer.
People who can afford to put 800 gallons of Jet-A in their Citation don’t give a damn what a gallon of Regular costs, let alone a gallon of kerosene.

The only way to motivate them is with kerosene by the bottle.

I don’t know about JP-4, but facing the prospect of having to fill a 1000 gallon tank with $3 propane to fuel my back-up generator has a certain gulp factor for a retiree.

That’s the end game, complete power over us amd no 2nd Admendment

Yes – they are provoking us.

“the right of the people to keep and bear arms ‘is not a right granted by the Constitution. Neither is it in any manner dependent upon that instrument for its existence.’”
—US v. Cruikshank (as quoted in Presser v. Illinois)

Don’t forget we have the 10th amendment to go along with the 2nd amendment. Soon the states will be in revolt and ignoring the federal government. Let’s start by expelling some federal workers and arresting others. They can be held in local jails as long as J6 prisoners are in DC prison.

That should happened before 2 million plus illegals

wHitler is whole and cold heartedly in agreement on making people suffer for her ego. She’s a greenietard from the words “freeze them to death”.
The pipeline company is not noted for it’s pristine operating of pipelines, they’ve had some major screw ups but for this one they’re tunneling under the Straits of Mackinaw (or Mackinac for those of French derivation) under the bedrock. Then the pipeline will be run through that tunnel which is supposed to keep any oil that MIGHT leak contained within the bedrock.
wHitler would rather mandate masks, transgender bullshit and every other fascist dream to enslave the people. These EFF joe biden* supporters love to have the power and people bowing down to them.

to help feed supplies to communities in the state’s Upper Peninsula.…

This is in response to a Powerline post by John Hinderaker that mentions the #5 shutdown;

John posted about the potential closure of Line 5 in Michigan. He correctly cited the harmful impact to Michigan.

It is so much worse, though. Crude oil via Line 5 is transported to refineries in Canada and Ohio. Plus we in Wisconsin will lose one of our most important sources of propane. My district has the most users of propane for home heating of any congressional district in America. 27% of residents in WI CD-07 use propane to heat their homes. Last year in August propane was selling for $.80 per gallon. This year it was $1.50 in August and now over $2.00 per gallon.

The Line 5 closure would be disastrous for residents of northern Wisconsin and the Upper Peninsula of Michigan as well as the entire Great Lakes region.

The only solution is the states must fight for their residents. Will the states do that? “Fight” means action (not violence) not words (political BS).

Adverse impact of Governor Whitmer suddenly ( line has crossed Macinac for 50 years) becoming woke, on Ontario is even greater than on Michigan and Wisconsin. Line 5 is source of over half Ontario oil supply and there are ( as result of Trudeau cancellation of Energy East pipeline) no good alternatives. This will mean immediate and extended petroleum products rationing, with priority allocations to home heating, public transport, manufacturing, and very little for automobiles.

I also wish to note that Governor Whitmer does not appear to be acting in good faith and is promoting wholly unnecessary pain. Enbridge has filed an application to build a tunnel under Straits of Mackinac to enclose a new pipeline, thereby removing even the hypothetical pipeline leak risk. Whitmer is opposing this .

UPDATE- White House says ( around 6:00pm) Line 5 shutdown is not under consideration, and thus is not supporting Governor Whitmer, who now may have to move beyond her South Park based ‘Blame Canada’ strategy.