“Terry McAuliffe’s closing argument is that critical race theory is a ‘racist dog whistle’ that has ‘never been taught in Virginia.’ But I can debunk this lie—and prove that McAuliffe himself was the first Virginia governor to promote CRT,” Chris Rufo tweeted before proceeding to do just that. 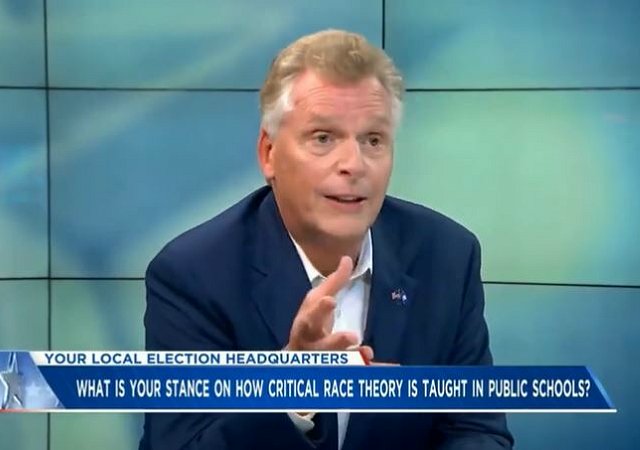 We are just a couple of days away from the Virginia gubernatorial election. With numerous recent polls showing a noticeable swing in support among likely voters from Democrat nominee Terry McAuliffe to Republican nominee Glenn Youngkin and a significant shift among education voters towards Youngkin in the closing days, all stops are being pulled as the desperation sets in for McAuliffe.

A persistent campaign theme for McAuliffe has been to accuse Youngkin and his supporters of engaging in “racist dog-whistling” over the issue of Critical Race Theory being implemented in public school classrooms in the state. Further, McAuliffe has routinely claimed that it is not taught in the state.

The number of times McAuliffe has fallen back on the “racist dog whistle” accusation and “it’s not taught here” claim is too high to count, but here’s one example. Watch below as McAuliffe tells far-left conspiracy theorist Joy Reid that Youngkin and his supporters were racists and making up stuff — and then in the next breath claim to be a uniter:

Hilarious. After calling @GlennYoungkin a "divider" who's a racist, would ban *all* abortions, end gay marriage, and backed by Virginia parents who support a "racist dog whistle" about CRT, Terry McAuliffe tells Joy Reid that he's "a uniter" who "bring[s] people together" #VAgov pic.twitter.com/DFKc6hziui

In one particularly heated exchange between McAuliffe and a local reporter during a roundtable discussion a few weeks ago on the question of Critical Race Theory being taught in public schools, he just embarrassed himself and got upstaged by the reporter who did some actual journalisming:

When [reporter Anita] Blanton questioned McAuliffe about CRT, he called it a “dog whistle” that’s dividing people but wouldn’t define what he believes it means.

“Anita, it is not taught here in Virginia,” McAuliffe said.

“But how do you define it?” Blanton pressed.

“But if we don’t have a definition, how can we say it’s racist?” Blanton pressed again.

McAulliffe never did define it.

In response to McAuliffe’s repeated allegation, leading CRT critic Chris Rufo, who is so reviled by the liberal media that he has been subjected to numerous “fact checks” and hit pieces from the likes of the Washington Post among others, took to the Twitter machine to demolish the claim in a lengthy thread:

Terry McAuliffe's closing argument is that critical race theory is a "racist dog whistle" that has "never been taught in Virginia." But I can debunk this lie—and prove that McAuliffe himself was the first Virginia governor to promote CRT.

Under the Northam administration, Superintendent of Public Instruction James Lane sent a memo to Virginia public schools endorsing "Foundations of Critical Race Theory in Education," calling it an "important analytic tool" that can "further spur developments in education." pic.twitter.com/jJLuqdAqi5

He closed out his argument by pointing out the word games CRT proponents in the public education system and beyond frequently play when they’re trying to get around the accusation that they’re promoting/teaching CRT:

McAuliffe is playing a linguistic shell game to obfuscate about critical race theory. But the reality is that Virginia Department of Education promotes all of the *concepts* of critical race theory: “systemic racism,” “white supremacy,” “white privilege,” “white fragility,” etc.

Rufo also created a dedicated section on his website that specifically debunks McAuliffe on this critical issue.

Beyond that, I find the “it’s not being taught here so stop manufacturing an issue” argument to be specious at best. I mean let’s assume for purposes of discussion that CRT is not being promoted/taught in Virginia public school classrooms under whatever wording Democrats want to use on the subject.

What’s the alternative? To wait until it is and then try to get it removed? That’s a terrible strategy and it never works in politics, which we’ve seen throughout our history when bad laws are passed and then career politicians with vested interests in keeping the laws on the books then try to come up with “solutions” or “fixes” to them that make them worse (see Obamacare as a prime example).

Even if CRT isn’t being taught in the school systems where understandably concerned parents are showing up to make their opinions known, so what? That is absolutely the best time to show up to a school board meeting to let those on the board know in no uncertain terms to not even think about implementing it, and that if they are considering it, it’s best to stop right now before an even bigger fuss gets made with more angry parents showing up and triggering Democrat board members who, like Terry McAuliffe, “don’t think parents should be telling schools what they should teach.”

Terry McAuliffe isn’t avoiding giving his detailed opinion on CRT because “it’s not being taught” in public school classrooms (which, as Rufo documented, is a lie); he’s avoiding giving his opinion because he knows it’s a losing issue for his party and that parents and other CRT critics have the upper hand in the fight. As an alternative, McAuliffe has bizarrely decided that strongly insinuating that roughly half of the voters in Virginia are racists is a smart campaign strategy, which probably at least partially explains why there’s been a dramatic 42 percent shift among education voters from McAuliffe to Youngkin in the last month.

As it turns out, moms and dads showing up to speak up for their children don’t cotton too well to being called racists. Who knew?

McAwful and other progressives don’t want you to know about how far the government run schools have gone to indoctrinate millions of kids.

There have been dozens of documented cases of school board members telling each other to hide it from parents.

The Democratic Party used to be the party of liberal ideas – supporting the Bill of Rights. It has morphed into a party of intolerant bigots who see personal rights as an impediment to their agenda. That’s who so many have left the Democrat Party – they are unrecognizable.

The Dem Party is now a Party of DIRTY TRICKS, LIES and CENSORSHIP.

Virginia – send a message on Tuesday that this bullshit STOPS NOW.

Leftists lie with ease you breath because their Propaganda Ministry will protect them every time.

Let’s all believe the former bag man for the Clinton Crime Family
There is axe murderers with more integrity.

“Parents are racist! I decree it!”

Yeah the protestations are too revealing. ‘Hey we don’t use CRT we use notCRT’ …which just happens to constitute the same framework, tenants, principles, ideas, ideology and goals all coincidently marketed, sold and administered by the same for profit race baiting cabal of grifters.

“Those aren’t my fingerprints.’
“But they are, Terry, they match your FBI file.”
“No they aren’t! And you’re a racist!”