“If the transition is interrupted, if one side or the other in this partnership tries to prevail, then the U.S. support for all of these issues, including debt relief, will be in question.” 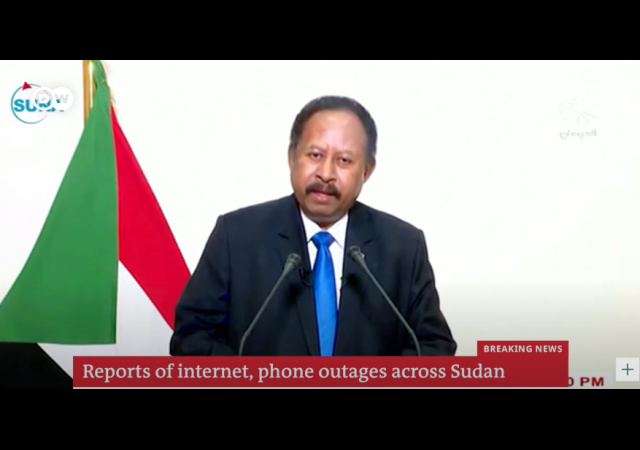 The Sudanese military staged a coup over the weekend, Arresting Prime Minister Abdalla Hamdok and most of his cabinet members.

Sudan is the third country with a military coup this year.

The transitional government has been in charge since 2019 after the ouster of dictator Omar al-Bashir:

Tensions between civilian officials and the generals who have been ruling Sudan under an uneasy power-sharing deal have been escalating for several weeks amid a spiraling economic crisis in the strategic nation on the Horn of Africa.

Last week, tens of thousands of protesters took to the streets of Khartoum and other key cities, demanding the military hand over control of the country to civilian leaders in a reminder of the monthslong protests that preceded Mr. Bashir’s ouster in 2019. Days earlier, a smaller crowd of protesters jumped barricades protecting the presidential palace in Khartoum in what they said was a show of support for a military takeover of government.

Abdel Fattah al-Burhan, a general who heads the Sovereign Council, insisted the military needs “to protect the country’s safety and security” until a civilian government is elected.

However, al-Burham set the elections for June 2023. Let’s see if that happens!

I wonder if it’s a coincidence the coup happened now. After al-Bashir’s fall, Sudan agreed to have a military figure lead the Sovereign Council for 21 months and then a civilian for 18 months. The “alliance of unions and political parties” responsible for the uprising against al-Bashir picked the civilian.

That means al-Burhan would have to hand over his power to a civilian in November:

The military was meant to pass leadership of the joint Sovereign Council to a civilian figure in the coming months. But transitional authorities had struggled to move forward on issues including whether to hand Bashir over to the International Criminal Court, where he is wanted for war crimes.

In recent weeks, civilian officials had claimed credit for some tentative signs of economic stabilisation after a sharp devaluation of the currency and the lifting of fuel subsidies.

Burhan said it was incumbent on the armed forces to sense the danger and act after infighting between some political forces and “the striving for power” and “incitement to chaos and violence”.

The military placed Hamdok under house arrest. They tried to make him issue a statement in support of the coup. He did not and they moved him to an undisclosed location.

The internet has gone down. No one can get in touch with the military or government officials.

U.S. special envoy for the Horn of Africa Jeffrey Feltman will visit Sudan later this week. Feltman warned the coup could harm Sudan’s economic policies meant to revive the country:

The crisis could derail Sudan’s economic revival. A pariah in the West under al-Bashir, the U.S. in December rescinded the North African country’s almost three-decade designation as a state sponsor of terror, recently the nation secured International Monetary Fund funding and a pledge by the Paris Club of creditors to rework $23.5 billion of its debt.

“If the transition is interrupted, if one side or the other in this partnership tries to prevail, then the U.S. support for all of these issues, including debt relief, will be in question,” The National reported, citing Feltman.

Protests have broken out in the streets of #Sudan capital, Khartoum, after the main pro-democracy group called on people to counter an apparent military coup.

If Trump runs and somehow wins in 2024 this is what Left has in mind for America.

Which is why they are and will continue to spend the next several years purging our military and putting more people like ‘White Rage’ Milley in charge at the highest levels on down.

Right. Replace all the dedicated war fighters (the ones who remain) with useless woke idiots, then try to take over the country with them.

It’s their fantasy plan. One they hope might come true if need be.

More immediately, they are purging the military to prevent having it done to them.

Useful idiots who prosecute fascism by remote, through delegated Choice. Roe, Roe, Roe your baby, violently down the river Styx. There is precedent.

In their world, minions do as they’re told. That includes the military rank and file. So if the leadership at the top are woke leftists, that leadership will issue orders and the enlisted people grab their weapons and yell “Yee-hah!”

Their world isn’t strong on reality testing, which they’ll discover if they order the enlisted ranks to open fire on American citizens.

It would’ve happend this time if the cheating had been corrected in time Trump sworn in.

Whitmer-closet? Libyan solution? Dozens showed up without fire extinguishers, engaged in minority mischief, only to be assaulted and aborted (in a prone position) by a fascist government, and a cover-up by a press that brayed handmade tales over more than 19 trimesters, in progress. No nationwide insurrections. No neighborhood incursions to intimidate families and residents. No durable occupations. Oh, wait.

Anyone know the Sudanese military’s positions on things important to us?

They’re in favor of grabbing the boodle, all of it. So is the civilian government. The issue (I think) is which one should be successful…

Thanks, Mary, for this important update.