RI Mom Nicole Solas To National School Board Assn: “We don’t want you in our schools anymore”

RI Mom Nicole Solas To National School Board Assn: “We don’t want you in our schools anymore”

At Moms For America rally: “We don’t want sorrys. We want resignations. We want oustings. We want states to withdraw their memberships from the National School Board Association…. We don’t want you in our schools anymore.” 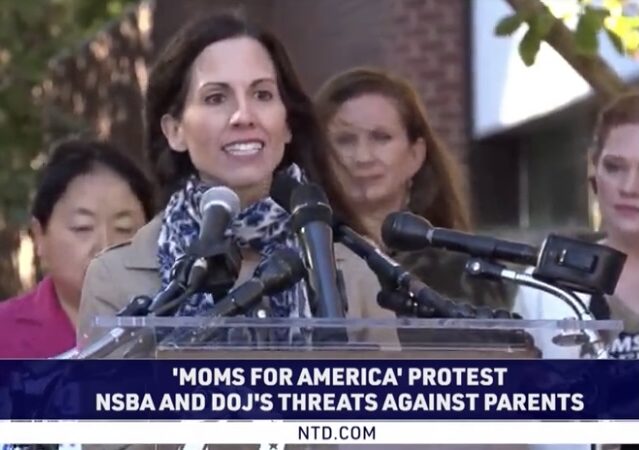 Nicole Solas is the South Kingstown, Rhode Island, mom who went public on Legal Insurrection on June 1, 2021, with her story of being targeted by school and union officials for seeking documents about Critical Race and Gender teaching in the kindergarten her daughter was scheduled to enter.

Nicole’s post on Legal Insurrection landed her on Tucker Carlson and in the middle of a rising firestorm over CRT, I’m A Mom Seeking Records Of Critical Race and Gender Curriculum, Now The School Committee May Sue To Stop Me.

Since then, Nicole’s stardom has risen as local officials, not used to someone pushing back, have continued to provide media fodder not only by the school committee threatening to sue her, but by National Education Association – Rhode Island actually suing her. The union dropped its demand for an injunction, but now faces anti-SLAPP claims, Court Filing: RI Mother Nicole Solas Demands “Compensatory and Punitive Damages” Against Teachers Unions Under Anti-SLAPP Statute.

So it was no surprise that Nicole was a speaker at the Moms For America rally today in D.C., protesting the targeting by the National School Board Association, Department of Justice, and FBI of parents protesting at school board meetings.

Nicole’s speech was four minutes of pure fire and brilliance. I don’t recall ever using emojis in my posts, but these are deserved 🔥🔥🔥

My name is Nicole Solas. I’m a mom from South Kingstown Rhode Island. And I have a daughter that was entering kindergarten. I simply asked questions of my school board and they attacked me. And then the National Education Association attacked me. The largest teacher’s union in America is suing me because I submitted public records requests to get public information about critical race theory. And now the National School Board Association is targeting me. And now the Department of Justice is targeting me.

Am I a domestic terrorist because I want to know what my daughter is being taught in school?

The National School Board Association conspired with the highest level of law enforcement in America to target moms. And they didn’t just want to target us. They wanted to destroy our lives. You know what happens when the FBI knocks on your door and starts eliciting statements from you, even when you’ve done nothing wrong, that could be the beginning of the end of your life. That’s not the first time that’s happened in this country with the FBI targeting innocent Americans.

And now they say, sorry? Uh, sorry, we tried to ruin your lives. Oops. Don’t forget to pay your dues. Well, we don’t accept that apology.

The NSBA isn’t sorry. They didn’t even say sorry to parents. They said sorry to their school board associations, because they didn’t get their vote to target parents with the force of the FBI. They’re sorry they didn’t follow Robert’s rules of order.

They’re sorry they got caught and didn’t do this better. They’re sorry their bottom line is now being targeted. What they care about is their money, their power and their political agendas.

They don’t care about parents and we don’t accept their apology because they’re going to target us anyway. There were FBI helicopters in Loudoun County at a school board meeting. They’re not sorry. They’re just going to be sneaky.

We don’t want sorrys. We want resignations. We want oustings. We want states to withdraw their memberships from the National School Board Association. Three states have already done it. We want more.

We don’t want you in our schools anymore. Stopped siphoning public education funds to fund your political agenda that targets parents and children. Apology not accepted.

The enemy is evil and will not back down. Who has her back?

This woman has large cajones and started a movement to take our children back?

The truly funny thing is the left created this woman 🤣🤣 The left couldn’t help itself when it targeted her thinking she would fold like a antifa Democrat faced by a Kyle Rittenhouse in a dark alley way. Instead she turned out to be a female Kyle Rittenhouse!

Radicalization works both ways.
I had a patriarchal, anti-gun police chief (license issuer) to thank for mine.

This is the counterculture gaining steam. If McAuliffe goes down it will snowball. If not it will continue to brew. It’s only a matter of time.

In a strange way, starting in 2016, it was all about 2024. It took Trump, then losing, to allow the progressives to fully show themselves and their excess, which they are not done doing. It sets the stakes for a major repudiation, and for liberals to reclaim their party.

Things are not linear.

They are going to steal this election

Yes they are going to steal everything they can, why would they stop? No one slaps them down for it.

I am so frustrated by people speaking of him as he won anything. He didn’t win. Period.

When Biden was installed in office, it was pretty much the end of depending on the constitution to protect our rights.

This lady is awesome! What’s the term, based? God bless her!

Based is one, kids sometimes use “dope”… not meaning an stupid person, but something cool.

That’s how our republican leadership should talk, but they are hiding out waiting for this to die down so they can go back to “working together” with the Democrats.

Anyone else here have Central NY’s John “Bipartisan Consensus” Katko as their GOPe guy in D.C.?

This will warm your heart as it is a start on that level.

If you look at how the MSM is “reporting” on this, the target was hit hard (the MSM/Dems are not happy).

Teacher’s Unions are a CORE constituency of the Democrat Party. The make HUGE financial contributions and contribute many volunteers to election efforts.

Teachers Unions have been hijacked by the WOKE and are ALL – IN for indocrination in to neo-racist CRT, Gender-Dysphoria and teaching anti-Americanism.

GARLAND directed the FBI to go after PARENTS because he was serving the Teacher’s Unions (and, apparently also serving himelf because his kid makes $$ from pushing CRT).

DEMs are now in a no-win position. They either piss-off the teacher’s unions – or they piss-off parents. The Party decided to support the WOKE Teachers Unions and to piss-off PARENTS.

They now have a clear-eyed view that the Dem Party supports indoctrinating their kids.

“because his kid makes $$ from pushing CRT).”

Always use the correct language:
“his son-in-law runs the largest CRT school consultancy in America.”
Make sure the hypocrisy glows like Bikini Atoll.

Democrats picked a real loser. He has screwed up just about everything he touches. Democrats are not in trouble because of anything Trump or Republican have done. It is JOE BIDEN and the people foolish enough to have bought into his bullshit during the campaign. He was packaged and sold as a moderate who would return competence to the White House. Democrat votes love a good fantasy and the media pushed that fantasy.

In reality, Joe is far from moderate and far from competent. He sold his soul to Bernie Sanders, BLM, HRC, Soros. The extreme WOKE and their racial, gender and socialist agenda. He installed people to run agencies – not because they were the most competent, but because they checked some box that would signal some virtue. Every announcement was some box-checking first. Now we have the first Trans 4-star Admiral – but they don’t tell you that that person’s policies caused the deaths of thousands during Covid – or that that persons saved their OWN MOTHER from the policies they forced others to abide by. So, while other people’s moms and dads died from those policies – this person’s mom was safe. disgusting.

Yes, there was a first – but the media buried the lede. The headline should have read “Most Incompetent 4-star Admiral Ever to Fill the Post – Save Own Mother From Their Deadly Policies While 1,000s of Others Who Had to Follow Them Died”

““Most Incompetent 4-star Admiral Ever to Fill the Post – Save Own Mother From Their Deadly Policies While 1,000s of Others Who Had to Follow Them Died”

But the position in honorary. It’s like complaining that Charlie Sheen is the stupidest PhD ever — the complaint is meaningless.

“the position is honorary”

It did not stop the legacy Media from playing it up.
It got a headline in every print and broadcast media outlet.

FYI – HRC stands for “Human Rights Campaign” – the ones pushing gender and trans lunacy – most people don’t know where all the “pronoun” stuff originated from – its HRC.
Look them up on the internet. These are the people changing American society from behind the scenes. The Wizard behind the curtain. . They used to be a gay rights organization but when gay rights large succeeded with the right to marry – they morphed into a political organization (they pretend to still be about civil rights – don’t be fooled). They are a Dem Party operatives that claim to speak for all LGBTQ+ but many gay folks have come to realize what’s really happening with HRC – they don’t want HRC to speak for their political views.

“Make-Believe Woman Receives Huge Participation Trophy.”
The MSM can print that all they want; that’s how anybody with a brain will read it.

No, they morphed earlier than that. They tried to be nonpartisan, but when they endorsed Al D’Amato they got so much backlash from partisan Democrats that they decided to submit and become part of the Dem machine. For a while I used to send them the occasional donation, but I stopped when they endorsed Kerry against Weld simply because Kerry was the Democrat, even though on all of their issues there was nothing to pick and choose between them.

I have commented for years on blogs following Dennis Prager’s opinion the public school system has been nothing but a Leftist Seminary teaching Leftism mostly in every subject possible.

It’s wonderful to see all these parents making a difference. But tell me, are they going to undo all the good they’re currently doing by sending their kids to college? Elementary/middle/high school is merely the primer of this degenerate government’s commie indoctrination curriculum.

I suspect that after this experience, they will be awakened enough to ask a series of probing questions of anyplace where their Buffy or Jody will be applying.

This is leftism at its finest. Remember that Holder did this with several environmental groups, that they conspired with them to do a “sue and settle” to get regulations favorable put into place rapidly. It is what the Biden administration is doing with the ACLU, negotiating a $450,000 stipend to make cases “go away” on the “traumatic injury due to separation at the border”.

The collaboration of businesses, government, and “action groups” is what makes this country less and less capitalist. It is actually fascist, to leave the ownership in the hands of the corporation but to put in place regulations that are friendly to those groups and corporations.