The unaccompanied children “typically arrive carrying backpacks and are bused to locations including The Bronx, Brooklyn, Queens, upstate Newburgh and Bridgeport and Danbury in Connecticut.” 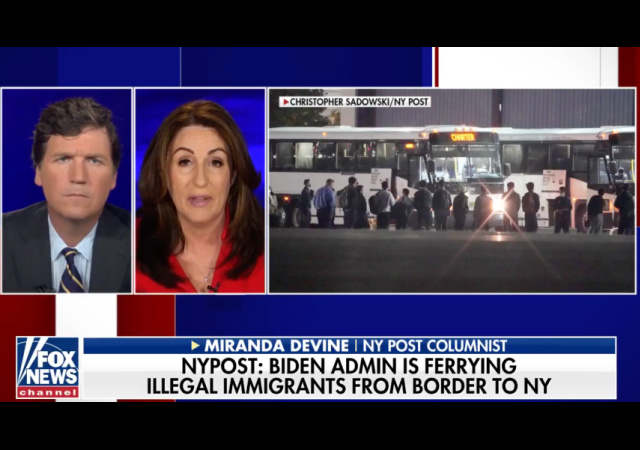 The New York Post reported that Biden’s administration is flying migrants to New York state in the middle of the night:

The charter flights originate in Texas, where the ongoing border crisis has overwhelmed local immigration officials, and have been underway since at least August, according to sources familiar with the matter.

Last week, The Post saw two planes land at the Westchester County Airport, where most of the passengers who got off appeared to be children and teens, with a small portion appearing to be men in their 20s.

Westchester County cops stood by as the passengers — whose flights arrived at 10:49 p.m. Wednesday and 9:52 p.m. Friday — got off and piled into buses.

Some of them were later seen meeting up with relatives or sponsors in New Jersey, or being dropped off at a residential facility on Long Island.

The Post discovered that 21 flights have brought in “around 2,000 migrants” to the “airport outside White Plains” since August 8.

The migrants include unaccompanied children:

A source familiar with the operation at the Westchester airport said the underage migrants typically arrive carrying backpacks and are bused to locations including The Bronx, Brooklyn, Queens, upstate Newburgh and Bridgeport and Danbury in Connecticut.

Around 12:30 a.m. Saturday, it stopped in Syosset, Long Island, at the campus of MercyFirst, a nonprofit sponsored by the Catholic Sisters of Mercy that provides housing and services for “children and adolescents who are the victims of societal problems,” according to its website.

On Friday night, one bus left the Westchester airport and barreled down the Hutchinson River Parkway — which is off-limits to commercial vehicles — at speeds greater than 75 mph before crossing the Throgs Neck Bridge.

MercyFirst has a contract to supply the federal government with residential services for “immigrant youth,” according to the site. 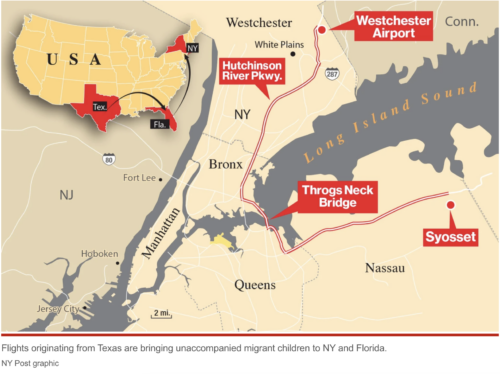 The Post also saw flights arriving at Jacksonville International Airport in Florida. The cops watched as 10 to 15 people with the same hats and duffel bags loaded a charter bus.

The bus took the migrants to “the Twin Oaks Academy, a juvenile detention center in the Apalachicola National Forest near Tallahassee, where staffers were waiting to open a gate topped with barbed wire.”

New flight plan needed… “oops, how did we end up in Mexico City?”

My screen jumped as I clicked reply to Pablo. No down thumb….was about to say no vetting of children “sponsors”. It is child sex trafficking until proven otherwise. With F. Joe Biden…aka ” Sniffles” .. How many kids are going to Delaware?

This should be treated as an underage sex trafficking crime, unless evidence is presented to refute the charge.

But why?
Are Democrats concerned that the number of affluent progressive citizens fleeing these areas for low-tax states is tilting them red?

Maybe it’s as simple as that?

As the spouse of a LEGAL immigrant, I protest calling these individuals “migrants”. They are illegal aliens who successfully crashed the gates and cheated the system.

WHY IS EVERYTHING SNEAKY ! ! ?

Border – Gaslighting that there is no crisis
Moving illegal Aliens around America – in the dead of night
Schools teaching race-primacy, gender-fluidity and anti-Americanism
Trillions of spending – limited info given to the public
. . . And more

Why is everything sneaky?

Same with Pete Buttigieg who defends paternity leave which he has been on since August. If it was the right thing to do why the hell did he take such pains to try to hide it?

See? This proves the border is perfectly under control. If it wasn’t, we wouldn’t be able to herd them onto the planes this way.

Texas should start handing out coupons for free bus passes outside the processing centers near the border. Give them all a free ride to their preferred blue state.

IF THEY WERE AS SNEAKY TO ILLEGALS AS THEY ARE TO USA CITIZENS – THEY WOULD GIVE THEM FREE BUS PASSES – Then after getting started tell them it a free-pass back to Mexico.

Progressives are sneaky because they want to impose their policies and they know most Americans do not want their garbage divisive policies.

This was no secret!

Well it sure seems secret and sneaky – because the Progressive Media never report about the border or illegal aliens unless it is to push the Dem Party line.

Let’s say, its as transparent as Hunter’s business relationship with his father Joe.

OK, I would like to hear you out on this.

Question:. If it is not a secret, why are planes full of children landing at 4 AM? Why not bring them in during the business day when everyone is working so their arrival can be a happy one that is efficiently handled? How scary must this be for a child?

Are the Administrators of this…. busing program…. providing documentation & residency visas to these people on the down low? Or are they just blatantly ignoring Federal Law? I’m fairly sure of the answer, but we should be asking the question and demanding that charges be filed.

I am so disappointed I Gov Abbott
All hat no cattle
They continue to pour in our boarders
By the hundreds of thousands
By the way, when do I get free flights, food living arrangements?

Oh, come on, Gonzo. He’s had National Guard, Rangers, DPS and volunteers on the border for years. There isn’t much else he can do, and he’s done it by getting funding to build the Fed’s wall. I take it you’re a West fan, but so far he’s done nothing but talk.

I don’t mind the illegals so much – they’re just passing through for the most part. It’s the Californians who are our biggest problem.

We are fighting this in Westchester.