Infamous squad member Rashida Tlaib says she is only wearing a mask because a ‘Republican tracker’ is nearby. 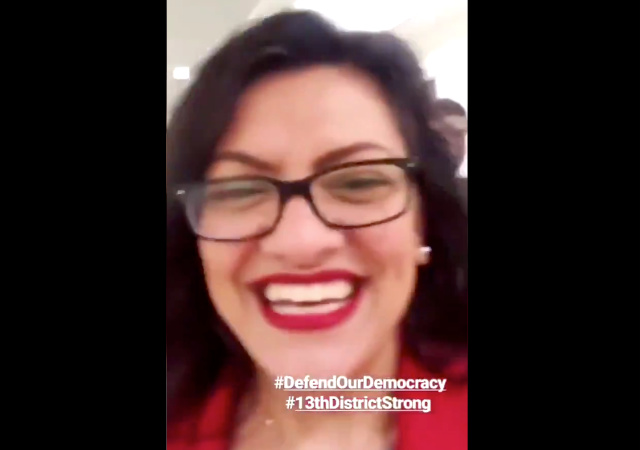 I have discussed the myriad of policy failures imposed upon Americans by “experts” promising to end the coronavirus pandemic.

Among the most grating of the rules we are forced to endure relates to mask-wearing. To begin with, the cloth masks we use for compliance are substantially less effective than professional quality respiratory protection.

The masks have become an essential prop in the COVID theater performances in the past 20 months. The latest example of staged COVID drama comes from one of the most odious and obnoxious members of Congress, Rep. Rashida Tlaib (D-MI).

Tlaib was caught on camera saying she was only wearing a mask because she was being tailed by a “Republican tracker.”

The Michigan congresswoman made the admission while speaking to a maskless attendee at an event in Detroit featuring Housing and Urban Development (HUD) Secretary Marcia Fudge.

Tlaib told the attendee that she only had the mask on because of the tracker, who was filming the exchange, after the person mistakenly thought Tlaib was scolding him for going maskless.

Caught on Video: @RashidaTlaib Admits She Only Wears Mask for Cameras

"I'm just wearing it because I've got a Republican tracker here"

This is not the first time the mask has been removed for Tlaib and other Democrats.

Just weeks before the event, the “Squad” member faced criticism when she danced maskless at a crowded, indoor wedding in Dearborn, Mich. The video surfaced on the same day Tlaib slammed Sen. Rand Paul (R., Ky.) for urging his followers to “resist” Centers for Disease Control and Prevention masking guidelines. Tlaib attended the wedding days after the CDC recommended wearing masks indoors regardless of vaccination status in local areas with “high” community transmission—a categorization that applied to Dearborn at the time.

Tlaib, who did not return a request for comment, is far from the only Democrat to ignore her own rhetoric on masks. Fellow “Squad” member Rep. Alexandria Ocasio-Cortez (D., N.Y.) masked up for an August photo with liberal activists but quickly removed her face covering after the picture was taken. One month prior, Virginia gubernatorial nominee Terry McAuliffe (D.) violated federal regulations when he refused to wear a mask on an Amtrak train. McAuliffe has pledged to maintain the state’s mask mandate in schools and told voters in September to “follow the CDC guidelines.”

The reviews are in for Tlaib’s performance…and they are harsh.

There’s the hypocrisy in action. Rashida Tlaib says she only wears a mask in front of Republicans! pic.twitter.com/qBOPp67Q9L

They don't care about the mask rules but will do nothing to stop them from impacting YOUR life.

That's how lowly they think of you.https://t.co/WniA56gq22

It’s all for show, we all know that.

“Rashida Tlaib says she only wears a mask in front of Republicans!”

I thought she was just being considerate of our eyes.

The vile Muslim supremacist/terrorist supporter, Tlaib, demonstrates yet again that she is ugly within, and, without. A fitting representation of the hypocrisy, imperial arrogance and moral bankruptcy of the contemporary Dhimmi-crat Party.

Tlaib is a fitting Medusa for our times.

You are too kind…

I do not consent…I will not comply.

Lock down laws, mask laws, and vaccine laws have become ritual scarification. The more you can scarify your population, the holier you are. Mayors and governors are ratcheting up the scarification to prove they are the most holy.

So does this mean Rep. Tlaib is opposed to ‘trackers’ who trail, follow and photograph politicians? I didn’t see her comments denouncing those who followed Manchin or Sinema this weekend.

She didn’t say she’s opposed to them. All she said was that she has one, and therefore has to wear a mask so he won’t catch her without one.

Implying that her and her party’s strong stance on masks is only a public circus act and not a genuine concern.