After Grassley quoted polls showing broad support for the photo ID component of voter ID laws during a Wednesday Senate hearing, Politifact suggested the “polls overlook[ed] nuances in the debate.” 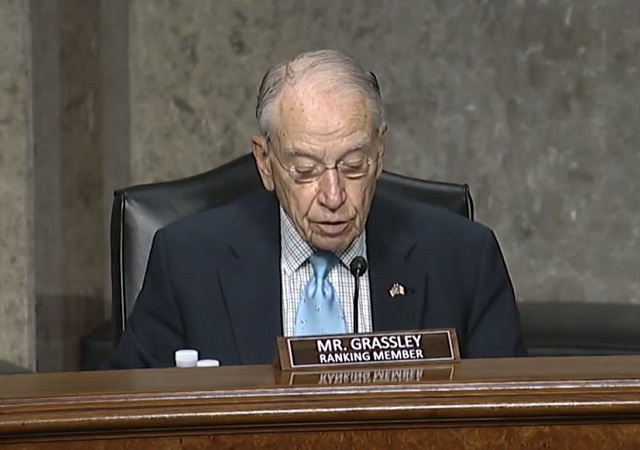 On Wednesday, a Senate Judiciary Committee held a hearing on H.R. 4, also known as the “John Lewis Voting Rights Advancement Act,” a bill leftover from the last session of Congress. Democrats hope to revive it as a backdoor way of getting what they want but haven’t been able to from the stalled so-called “For the People Act.” Republicans nicknamed that bill the “Corrupt Politicians Act” due to its sweeping nature, which would federalize elections on a massive scale.

In his opening statement, Ranking Member Chuck Grassley (R-Iowa) told the committee and the assembled panel of guests that H.R. 4 was yet “another attack on the Supreme Court” in the aftermath of their 2013 Shelby County v. Holder decision, which effectively stopped states from having to “preclear with the federal government election law changes based on data from 1965.” Plus, it was an attack on their ruling in the Brnovich v. Democratic National Committee case earlier this year, which found that an Arizona voting law did not violate the Voting Rights Act, nor was it enacted with the intent to discriminate against minority voters.

During his statement and in a back and forth with Biden DOJ Assistant Attorney General Kristen Clarke, Grassley pointed out that voter ID laws, including the photo ID component, had “an overwhelming majority of Americans’ support.” He said it was something “Democrats claimed to support earlier this year” when they flip-flopped on voter ID and jumped on board Sen. Joe Manchin’s (D-W.Va.) compromise voting rights bill, which included voter ID requirements.

Grassley quoted specific polls that showed broad support even among black and independent voters for the photo ID element. He then turned to Clarke and asked her “how do you [and via extension the DOJ] square prevailing public sentiment with your comments that voter ID is a burdensome proof of citizenship required and your words a ‘bag of tricks to suppress black votes’?”

Watch their exchange below:

The Democrat apologists at Politifact were apparently monitoring the hearing. Grassley pointing out the inconvenient facts about widespread support among differing voting blocs for photo ID voting requirements triggered them and they took to the Twitter machine to declare that the polls he correctly referenced supposedly “overlook[ed] nuances in the debate”:

During a hearing on a voting rights bill named for the late U.S. Rep. John Lewis, Sen. Chuck Grassley said that a majority of voters support voter ID laws. We found that the polls overlook nuances in the debate.https://t.co/CdbYRlDgvl

Perhaps even more hilariously was that when you clicked on the link to the piece, which was written in August, you saw that after they noted that in some states, voter ID could mean something as simple as a utility bill. They begrudgingly admitted that proponents of photo ID laws for voting were correct when they talked about having board support in the polls:

In the Monmouth and Pew polls, just over 60% of Democrats backed photo ID requirements.

LOL. But yeah, the debate is “more nuanced” or something.

This is a classic example of a respected-among-Democrats fact-checking organization that is quite literally trying to gently massage an inarguably false narrative into a true one because the facts do not back up their claims:

When the Facts are not on your side, argue the Facts "overlook nuances." https://t.co/2VQz1KIkIv

Sadly for Politifact and Democrats alike, and to quote Ben Shapiro, those pesky little facts don’t care about your feelings.

“It really depends on where that photo ID law has been instituted.”

And, I thought it all depended on what the meaning of photo ID is is.

Nuanced appears to mean that d/progressive ideologues are losing the debate. The media wonders why folks turn to nontraditional sources and new media for honest coverage.

“Politifact suggested the “polls overlook[ed] nuances in the debate.”

Like all the nuances behind the apocryphal polls that show overwhelming support for “common sense gun control,” in an near-apocalyptic society where a thousand new gun owners are being minted every day? Howcome we never hear about those?

And what does it matter? In the real world, voters overlook nuances all the time.
I mean… just look at who’s *resident!

I’d love to see some progressives walk into the ‘hood in Baltimore or Detroit, or any major US city and ask:

“Why is your momma too stupid to get a free government id?”

In 1971 I received my first driver’s license. That license did not have a photo on it. Every single license I have had since then has had a photo. Photo IDs have been issued universally since 1980. How many decades does it take before we decide that photo ID is required? Enough! Photo IDs control rather than restrict voting.

They already needed a photo ID to get their food stamps, section 8, free telephone, and free everything else. Why can’t they take it out when they go to vote?

I’m here to defend the opposing side. Photo Id requirements are horrible. Why? because everyone knows only the rich can afford cameras. Second, how many times have you heard “they all look the same”? Third – so what if photo ids are needed for buying liquor, boarding an airplane or cashing the check? Those aren’t Constitutional rights, nor are they cherished sacred rights. Our Founding Fathers didn’t need photo ideas, why start now? And this is just the start of “show me your papers” – a slippery slope we want to avoid. It won’t stop with photos being needed for voting. Let the GOP get away with this and they will attack freedom of press by demanding reporters prove their stories are true, then on to prohibiting schools from having the intellecual freedom to rewrite history, biology, and climatology.

This is why we have to stand up against photo id requirements. Its all about limiting freedom and dog-gone it, the few parts of the pledge of allegiance I do recite as well as sing for the national anthem are all about freedom. Right?

It wasn’t originally. The founders were careful to specify a republican form of government that was neither democratic nor dictatorial. Then came the Twilight Amendment (“penumbras and emanations”), and the establishment of the prime principle: political congruence, overriding any semblance of coherent, limited governance, thereby paving a path and grade to authoritarian progress.

That left a mark!

(Sorry, I don’t mean to give the Democrats any new ideas…)

That only applies to printing presses with continuous roll feed for more then 10 newspapers per roll.

Remind me again what exactly Grassley did when he was majority head of the Judiciary Committee about this?

Oh that’s right. Exactly what he did about everything else when he was in charge.

One of the Democrat talking points about voter ID laws is that in some areas (inner city and rural) it is very difficult for minorities to obtain a state or Federal ID and that cost is also a barrier. Having spent 3 years in rural Missouri, there’s some truth to that. DMV office that only issues IDs and Driver’s Licenses one day a week because the staff has to rotate to 4 different offices in 4 different small towns, and when they are open, they don’t have enough time to serve everyone that shows up some days – and to get to another office is over an hour or two away, if you’re lucky. The solution to that though would be to make getting a state ID part of the advancement requirements for high school kids – you must have a state ID or driver’s license before advancing to senior status, and just have the proper people show up at the high school on a schedule. No excuses after that.

A re-thinking of who gets to vote is also in order.

It might be inconvenient but that is different than difficult. I was stationed overseas most of my military career. When I came home on leave I had to go to the DMV to renew my DL. I certainly had better things to do with my time than call the DMV, figure out their hours, find the new location, stand in line, fill out forms, stand in a second line to turn in the forms and take the photo.

If service members who live on a different continent can use use their leave, vacation days, to get this done during a brief visit back to their hometowns then the folks who live year-round should be expected to do the same.

I believe one of the nuances they are referring to is that blacks and other ethnic minorities support voter ID requirements.

Geesh, they are acting like the photo has to be a portrait commissioned to Annie Leibovitz.

Fact checkers lose their authority when they wade into biases. That ship has sailed a long time ago, but this is just one of the reasons it did.

Main reasons:
-This current problem: Everything is black and white (and usually whichever of those colors is considered “wrong”) when it’s on the disfavored side of their bias. However, when it’s on the favored side of their bias, it’s “complicated”. The original fact-checker in the modern era (Snopes) began to fall prey to this pitfall during the early Obama tenure. Contextualizing to favor one position while decontextualizing the opposition is petty and vindictive but quite rampant now.

-Ignoring huge errors. This somewhat goes along with the previous point, but when big demonstrably false statements are ignored on only one side of the spectrum, the silence is a deafening chorus of bias.

-“Debunking” facts with opinions or deliberately leaving out all factual data. We’re seeing this one a lot recently where a fact checker tries to rush to the rescue and makes a huge twitterverse worthy blunder. Nothing will undermine factchecker credibility like not sticking to the facts.

The main trick now is turning the original claim into a similar-sounding but not equivalent strawman claim, and then debunking that. And this is why fact-checkers are suddenly getting sued by people like Veritas and Stossel with simple claims of, “This is slander — you wrote that I said something that I absolutely did not say.”
The classic editorial cartoon shows Paul Revere on his horse, screaming “The British are coming!”; stamped underneath is “Mostly False: the vast majority of British are not coming, just a relatively small military detachment.”

Seems it is past time to start a fact checker watchdog site that points out their flaws and call it something like http://www.flawcheck.org