“All of the books had the same sort of narrative, the oppressor versus oppressed narrative.” 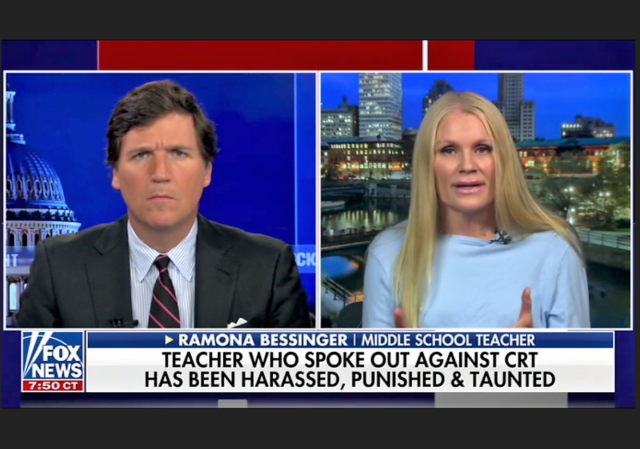 Ramona Bessinger is the Providence, Rhode Island, middle school teacher blew the whistle on the destructive racialized new curriculum, and then went public about the retaliation that followed, all in posts by her at Legal Insurrection:

The intensifying retaliation, culminating in a decision to suspend her for 5 days without pay and transfer her to a new school, has been documented here:

Ramona Bessinger: Well, first of all, I would just like to say that in all my years as being an educator, I’ve never seen anything like this. And sometime around last January, hundreds and hundreds and hundreds of books rolled into my classroom as well as educators all throughout the district. And immediately I knew something wasn’t right. The covers of the books were bizarre. They were cartoon-like. They were pamphlet style, very thin. All of the books had the same sort of narrative,  the oppressor versus oppressed narrative. It was just strange not to mention the quality of the books, the rigor wasn’t there.

So the moment I started asking questions, the moment I started probing and asking why we’re teaching these books, as opposed to vetted, literary material, boom, that was it. I was public enemy number one. Um, you know, I w every single I could not do anything, right. Everything was, uh, I was brought to task on absolutely everything. It was just ridiculous. And rather than sort of cower and be silenced, I decided I was going to get louder. And that is exactly what I did.

Someone told me about this political blog, Legal Insurrection. I emailed them and I explained that this was going on in my school. You know, there are these very strange books and this odd curriculum rolling out, and I was concerned, I didn’t quite know exactly what was going on, but by the time I wrote the blog, I had a pretty clear idea, but more importantly, it was the students, the reaction of the students and seeing the sort of mistrust and the overall you know, devastation I was feeling it was having on the students in my classroom, but I was also making connections to other teachers and students all around the country.

And certainly in my own districts district, we were all talking about this kind of strange collection of books that seem to be very racially divisive. I don’t like to say critical race theory. I call it racialized curriculum because that’s in fact what it is. So I wrote about it in that blog, and that was met with you know the mob descending on me when I went back to school in September, with some very strange attacks by  some colleagues, because God forbid you can have, you can have a reasonable discourse or an argument with any of these people. Not at all. No, you know, what they have to do is cower and hide and attack and make public displays. So,  that led to my getting louder and writing yet another blog about the harassment. And when I did that, then they upped the ante and involved children. You know, it’s always impressive when you use children as a political shields or political weapons to fight your bad health.

Tucker Carlson: Yeah. Just like the Khmer Rouge. I’m so grateful. You pointed out that a lot of these materials, these so-called books were stupid and badly written because they are because the people who write them are stupid and no one ever says that. So thank you for saying that and, and, and good luck. Thank you for being honest, Ramona Bessinger. Thank you.

Maldoror, in Lautreamont’s Maldoror, is persuading an innocent child that the way to succeed in life is carnage. Unfortunately the conversation is cut off by the child’s reaction:

Maldoror perceives that inside his youthful interlocutor’s head the blood boils: the nostrils flare, lips froth forth a fine white spray. He takes the boy’s pulse: its beat races. Fever has overtaken the frail frame. Maldoror fears the consequences of his words. He makes himself scarce – the wretch – vexed at not being able to converse longer with this child. When in maturity it is so difficult to master the passions, balanced between good and evil, what about a mind still brimming with inexperience? And what relative amount of energy does it further require? The child will get off with three days’ stay in bed. Heaven grant that maternal care may bring peace to this sensitive flower, fragile envelope of a fine soul!

Maldoror is poetically always about the relationship of reader and author. It is the reader who’s in need of maternal care to recover.

It sort of applies literally to the new teaching materials and children here, though.

And that parallels the effect of outrage posts on adult readers.

The insanity and Stalinist methods are more out in the open. Great to see the site making a difference. Instead of normalcy, Biden brought the opposite and it’s becoming easier to see where the progressives want to go and how they will try to get there.

This awakening in education is one of the good things from covid. The parent’s revolution has just begun. Intersectionality will unite it with other parts of the movement against progressive authoritarianism.

In some areas, the parents are fully on board with this. The school boards look the way they do for a reason.

I don’t know about elsewhere, but here schools boards seem to be mostly a bunch of people nobody knows elected to a job nobody else wants.

Govenor in state of Washington signed law requiring CRT. If parents don’t see this as blatant attempt to impose Marxism and fight for our kids then we have ourselves to blame for the sad outcome.

The books Ramona is referring to and the fact that ‘the narrative’ is so clear and blatant fits with the intentional switch from education being about the transmission of factual knowledge to it being a vessel for practicing ‘conceptual knowledge’ (aka theories of how the world might be or Praxis). The concepts play right into the Narrative with the students having insufficient factual knowledge to recognize they are looking at and being fed what I call an Inapt Metaphor.

If you want to see how deliberate all this is in education and any realm where the social sciences have become operative, take a look at the briefs being put out by the well-connected Frameworks Institute. The lack of literary quality goes to something I pointed out in Credentialed to Destroy: How and Why Education Became a Weapon, when I referenced that the definition of Literacy in state statutes no longer included an ability to reliably read as in decipher the words on a page and know what they mean.

If one can use the images to decipher the Concepts and are prepared to act on those concepts to bring about real world transformational change, a student is now deemed to be ‘literate’.

These books Ramona is referencing are very much Literacy in this sense. They also fit perfectly with calls for Equity in education. Equitable education is always about building a Critical Consciousness about race or any other so-called Global Challenges that serve as an excuse for massive restructuring of culture and society.

One thing I haven’t seen on this story is where are the parents?

Chances are the majority in this community are Kool aid drinking zombies. I get so frustrated at conservative parents pulling their kids out of public schools over the small stuff rather than fight- or at least hang around and drop poop in the woke kool aid punch bowl. So what happens when you leave- the lunatics win by default. Then the madness accelerates because you were not there to say no.

We are in this battle too. We are in the minority in our woke town. I’m on lists for having gotten vocal and unkind with their shit. It may get to a point where we pull our kid, but they don’t get to win by default. We may pull our kid at some point, but I will stay and stink it up light a bad fart until that time comes. If for no other reason than to give encouragement for anyone else who won’t put up with it.

Because our community is 80% woke, I will lose. They will never be outvoted in this town. I will eventually leave. I will leave the crime, the mask madness, the rising taxes and declining freedoms. My family and I will go to a state that is still sane, because trust me- as the purge of wrong thinkers from public service advances, the decline into woke madness will accelerate. There will be no people left in the room to stop them from declaring your fence, house, dog, your friends list on FB to all be racist. Then you must be destroyed. That’s how these people live.

Leaving your children in a school that’s not a good place for them to be while you fight the system is sacrificing your children for the cause. For some parents that’s asking too much. If they have the means to educate their children another way, they take it. I don’t fault them for that. They are often the ones who continue to fight for school vouchers so more parents have the same options.

You take someone who cares about what is right and proper, and wants to do a good job teaching things that are true and accurate and they get hounded, persecuted and fired. On the other hand you take someone who is just the opposite, who doesn’t tell the truth and has no concern for what is right, whose head isn’t even screwed on right, and they get invited to Rome to have a conference with the Pope.

Professor Jacobson has been on Tucker’s show a couple time…Whether you admire/like Carlson, he gave the good Professor a national voice. I think that connection was at play here, and now Romona Bessinger’s story is getting the same level of exposure. Like a flame that is growing.. I hope so.

Let them take ownership of failing education.
They asked for it, and their noses need to be rubbed in the “stank”

When you vote overwhelmingly Democrat, expect your children to be raised as moronic commies.

See David Horowitz’s Hating Whitey and Other Progressive Causes. As Jesse Lee Peterson says, racism doesn’t exist, It is only good vs. evil.