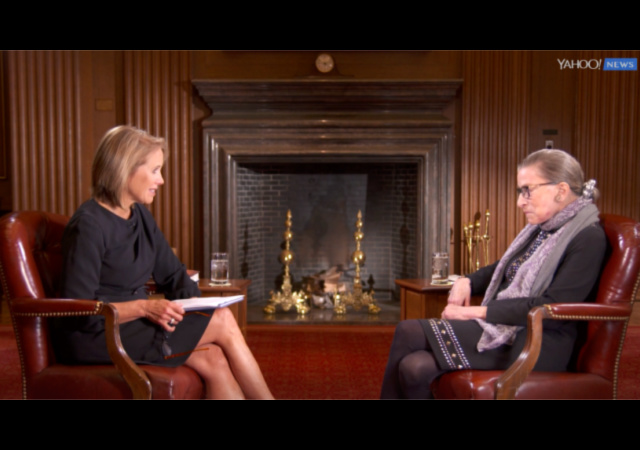 Katie Couric admitted in her book that she edited out comments Supreme Court Justice Ruth Bader Ginsburg made about Colin Kapernick and anthem kneelers:

The former Today show host reveals in her new book that she let her personal political views influence her editing decisions after her interview with the late Supreme Court justice in 2016.

In new memoir, Going There, Couric writes that she edited out a part where Ginsburg said that those who kneel during the national anthem are showing ‘contempt for a government that has made it possible for their parents and grandparents to live a decent life.’

The interview took place in 2016 when Couric worked for Yahoo! News.

RGB’s comments floored Couric, who could not believe she would feel that way. So Couric brushed it off as RGB being “elderly and probably didn’t fully understand the question.”

It was a simple question: How do you feel about Kapernick and others kneeling for the anthem. It’s insulting and arrogant to even consider the idea that RGB didn’t understand the question.

How dare RGB not feel the same way as Couric:

Couric felt that when Ginsburg said that people like Kaepernick were ‘dumb and disrespectful’ they were comments that were ‘unworthy of a crusader for equality’ like the liberal Supreme Court justice.

The day after the sit-down, the head of public affairs for the Supreme Court emailed Couric to say the late justice had ‘misspoken’ and asked that it be removed from the story.

Couric writes that she was ‘conflicted’ because she was a ‘big RBG fan’, referring to Ginsburg’s moniker.

It must have been a mistake! Even New York Times journalist David Brooks agreed with Couric.

David Westin, the former head of ABC News, told Couric she should not omit RGB’s comments: “She’s on the Supreme Court. People should hear what she thinks.”

Couric claimed she “lost a lot of sleep” before deciding to leave out the comment to “protect” RGB.

Couric left in RGB’s “dumb and disrespectful” comment. She left out the other comments to “protect” RGB. She also “felt that the issue of racial justice was a ‘blind spot’ for her.”

EVERYONE is coming down hard on Couric.

This is toxic on a lot of levels. https://t.co/cH1ZgpPPX2

(1) It’s not a journalist’s job to “protect” a news subject by suppressing the news, (2) it’s particularly condescending to think that RBG needed Couric’s protection, (3) no one in the mainstream media would have “protected” a conservative justice who said anything impolitic. https://t.co/XAx5dkFUGM

This is NOT journalism!

Couric is a bozo.

A malignant bozo, but a bozo nonetheless.

If should could make it through law school and pass the Bar exam, she’d be a great lying Soros prosecutor.

And Lefties celebrate it ?

They have perverted the term “Liberal” which in the classic sense was meant as a fight for individual liberty (see “Bill of Rights”).

I know dozens who have left the Democrat Party because they have so thoroughly lost their way. I dare say – Ginsberg sounds more like a conservative at this point. She was for individual liberty and personal freedom. Furthermore, she would have been shocked and insulted if she read Couric’s degrading reasoning for censoring her comments.

No reflection or curiosity that she may have been right. These people live under an emotional shield of “belief” that is unquestionable.

I’m anti-anthem (stupid ceremony) and anti-kneeling (bad reading of race relations). I feel the more the kneeling is discussed the more moronic people are getting.

Somebody has to point the way out of this fly-bottle.

In a just society, this would kill Couric’s career.

In a rational society, she never would have had a career.

In a just society, Couric wouldn’t still have a career

She not only completely sandbagged Virginia CDL with deliberate deceptively cut and spliced footage, but committed a federal felony by purchasing handguns out of state.

Of course, as an Authorized Keeper of The Narrative, she was never in any danger of being investigated or charged, despite formal complaints from the public.

Strange how all the edits go in one direction no matter who they are interviewing, and that the full footage of the interview never sees the light of day.

As I understand it, the FBI won’t allow you to record, and refuse to record themselves. They prefer the freedom of being able to make up anything they like afterwards.

Well, that’s too bad. If they want to talk to me without my lawyer and a recorder going, they’re investigating me, and I shouldn’t be talking with them anyway. Let the record show I offered to sit down with the FBI and answer questions but *they* refused.

I have a feeling their record will say whatever they want it to.

Our country was taken over by the Communists.

I make it a practice to watch Prof. Duane’s lecture at least once a year. The latter part of it–where he gives an actual cop equal time–is even more chilling than his presentation.
https://youtu.be/d-7o9xYp7eE

Someone had to keep RBG from using White Privilege! /

So, we have another Fake News example? Who is surprised.

couric calling herself a journalist?–please………

A boy takes a knee to a girl in proposal. Otherwise, take a knee, beg, good girl, boy, whatever.

Ginsburg was critical of racism hiding in plain sight. She may also have had an epiphany about the wicked solution before joining the victims of social progress, medical progress, and climate mitigation on the river Styx.

I don’t understand, what’s the big deal about this? Couric has a long history of deceptive editing. She’s notorious for it. She did it to Palin, she did it to the 2A defenders in her so-called “documentary” (and I do not understand how they lost their lawsuit), and all these critics never said a word. So why all the criticism now? After all in this case she didn’t distort Ginsberg’s words, she didn’t misrepresent them, she simply omitted the whole topic. That’s a lot better than her previous record.

Just my opinion, but at that point the cult of RGB had already been well-established and Couric didn’t want to take a wrecking ball to it.

In other news, it rains a lot in Seattle.

They lost their lawsuit because the judge ruled that although Couric deliberately did every last thing VCDL said she did, it somehow did not rise to the level of libel.

Mary, do you understand what the word “literally” means? “a woman who literally broke glass ceilings.” I don’t know of any glass ceilings that Ginsberg LITERALLY broke.

Sadly, usage is gone.
I have given up. And, I am an Engineer–we are marginally literate. Back in the day, I would require ONE complete sentence from everyone in the class to get a passing grade. I would explain: “I am an Engineer, not an English major. A sentence begins with a capital letter, ends with a period. It has a subject and a verb. That is ALL you have to do.”

I never actually failed anyone on this criterion, but had a hell of a time getting a check in that box in my grade book.

Edward Teller would only give interviews with signed contract that ALL of the interview would be shown… no editing.

The Blessed RBG must remain sainted.

There is a local (San Diego) radio personality that refuses all recorded interviews. Live or no go.

Your censorship not only applies to Ruth Buzzi but those that wanted to listen to her words. Pixie you’re the worst kind of slime.

This is how the woke media rewrites history

Katie was always too shallow to be a true “journalist” — She’s much more suited to “morning magazine” blandities and more at home with Today-show levels of analysis.

For Couric and the many, many others of her ilk, “journalistic records,” as it were, are fungible; lacking any intrinsic value, you see, such records are commodified into political capital.

Censorious editing and review, among other so-called journalistic activities and functions on the Left — whether independently or by cabal — works, we now know only all too well.

Losenkoism has infiltrated itself as a governing principle of the MSM. The revisiting — ideologically governed — “science” is the hallmark of our present sociopolitical epoch: a Stalinist redux that not only falsifies reality, but leads to widespread deception and death — to wit: last summer’s BLM-led Summer of Urban Fire — so thrillingly, purposefully, and with such condescension and patronizing rationale, such as “protection”.

. . . that should read Lysenkoism, of course; sorry