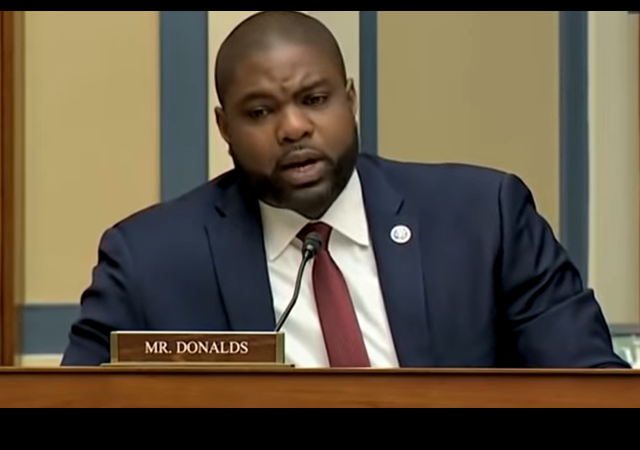 Every American consumer is feeling the pain of historically high gasoline prices, which do not look to be declining any time soon.

Laughably, one of the bluest blue areas is hardest hit.

Prices for gasoline in one of nation’s major cities reached an all-time on Thursday— the highest average price ever recorded in the United States, according to fuel savings platform GasBuddy.

Average prices for the fuel in the San Francisco metro area reached a new all-time high of $4.75 a gallon, breaching the previous record of $4.743 that was set in 2012, GasBuddy reported Thursday.

However, schadenfreude is no comfort, as the rising fuel prices are hurting struggling Americans who do not support the super-green policies that have driven up costs.

To distract the public, and to keep the eco-activists happy, the Democrats in Congress decided to grill petroleum industry executives over alleged lies relate to “climate science.”

Top executives of ExxonMobil and other oil giants denied spreading disinformation about climate change as they sparred Thursday with congressional Democrats over allegations that the industry concealed evidence about the dangers of global warming.

Testifying at a landmark House hearing, ExxonMobil CEO Darren Woods said the company “has long acknowledged the reality and risks of climate change, and it has devoted significant resources to addressing those risks.´´

The oil giant´s public statements on climate “are and have always been truthful, fact-based … and consistent” with mainstream climate science, Woods said.

Democrats immediately challenged the statements by Woods and other oil executives, accusing them of engaging in a decades-long, industry-wide campaign to spread disinformation about the contribution of fossil fuels to global warming.

“They are obviously lying like the tobacco executives were,” said Rep. Carolyn Maloney, D-N.Y., chairwoman of the House Oversight Committee.

This tactic did not come off quite as effectively as the Democrats hoped. Florida’s Republican Rep. Byron Donalds slammed the Democrats during the inquiry, and it was glorious.

“First of all, to the witnesses, the leaders of Exxon, Chevron, BP, Shell. I know that the climate activists in Twitterworld, which Dave Chappelle says doesn’t exist, and he’s right; because it’s just people who have nothing better to do but type on their keyboards,” Donalds said during a House Committee on Oversight Reform hearing titled, “The Fossil Fuel Industry’s Climate Change Disinformation Campaign.”

“And we do it too here in Congress,” Donalds continued. “But let’s be very clear, you need an apology. Because what I witnessed here today was just rank intimidation by the Chair of this committee. Trying to get you to pledge on what you are going to spend your money on is a gross violation of the First Amendment.”

Another Republican nailed the real purpose of the panel.

Kentucky Rep. James Comer, the top Republican on the Oversight panel, called the hearing a “distraction from the crises that the Biden administration’s policies have caused for the American people,” including higher gasoline prices.

“The purpose of this hearing is clear: to deliver partisan theater for primetime news,” Comer said.

what is funny, back when Zero was president and gas was headed to 5 dollars a gallon, everyone wanted him to do something, and the cry was the president couldn’t do anything, then along comes trump and he does something, gas process drop to really low, then next chapter Xiden gets in and stops doing the right thing and prices for gas goes up even higher than Carter

Yeah, it’s almost like you’d have to be a fucking retard to vote for a Dim.

Or was educated in the American school system. Same thing.

The gist of the Big Oil Execs testimony:

“It doesn’t make sense to get your oil locally when you can get if for a higher price from Saudi Arabia and transport it 10,000 miles across the sea on a Gigantic Super Oil Tanker. It is safer for the environment and somehow or other helps a lot with global warming.”

It’s sabotage by the horribly, horribly corrupt ruling ‘class’ in our country. They want their gravy train to keep rolling, our futures be damned.

I will try to say this nicely rather than to do justice to my feelings. This entire circus says the oil companies, the Democrats, the Republicans, et al, have massive contempt for the American citizen. The oil companies should get the oil locally (in the USA) and sell it for a reasonable price. They should tell the politicians to pound shale. This show is sickening,

It’s sabotage by the horribly, horribly corrupt ruling ‘class’ in our country. They want their gravy train to keep rolling, our futures be damned.

Big Oil doesn’t do shale, the returns for each well are too small for them.

Anthropogenic climate (30-year period) change correlated with atmospheric CO2 (of natural and minority human sources) is disinformation that has been proposed based on a [radiative] effect characterized in isolation, then inferring its efficacy with a simple scalar in the wild, in lieu of natural processes and phenomena that can completely explain local and regional temperature anomalies over short, long, and irregular intervals and spans in time and space. Meanwhile, the greenhouse effect is enriching the Earth, and CO2 is probable lagging indicator of warming.

But if energy gets expensive enough then we can have a massive new government program to help lower-income people buy what they need? No reason to waste an opportunity …

And they can pass a brand new energy tax on the middle class to pay for it. Win-win for the Marxist left.

Alternatively the blue states could simply live with the consequences of their energy policy because red states stop sending them electricity and Nat gas and food ….

Hate to say this but I’m good with that. Why? Because the blue states are using their sovereignty to force fossil fuels out and replace them with non-workable renewables.

Let them suffer their own consequences.

Truly, the vile Dhimmi-crats are the most manifestly useless idiots in American society. Dim-witted, ignorant, vain, narcissistic, infantile, vindictive and obnoxious demagogues and apparatchik totalitarians; all of them.

Opec is entirely oil producing nations and are almost all majority Muslims which means these climate oil=evil people are not doing it for Islam (otherwise opec would be Muslim free).

For once in your life shut up about hating Muslims, it is a fringe position. That war on terror is over Mr. Bush and nobody looks back on it as a golden age.

You’re obviously correct that the war on fossil fuels is not driven by Moslems, though OPEC countries have taken advantage of it to fund some parts of it that help them, such as the anti-fracking campaign and efforts to restrict drilling here in the USA (offshore, ANWR, etc.)

But that Islam is at war with us, and that a significant part of the Democrat Party is on its side, are hardly fringe positions. They’re more like truisms.

Also, idiot — come up with some new material, instead of banging the same, tired drum. Calling me “Mr. Bush” is totally lame and does nothing to support your position in support of Islamic supremacism, totalitarianism and belligerence.

You are foolish beyond belief. As well as morally bankrupt.

Danny that was some 1st order projection, truly a sight to see!

Funny, I didn’t see one word about muslims in his statement. Are you sure you’re not projecting your own issues?

Many Americans still support these Dhimmi-crats…But fortunately that number is declining.

Do you still believe that Biden has 42% approval?

And watching Biden bring in 800 staff members and taking a 85-car caravan through the narrow and tight streets of Rome…to fight for some green new deal is hypocrisy at best.

If I look at this correctly, a supertanker gives off more emissions to get to the U.S. than a XL pipeline with no emissions.