House Budget Chairman Says the Federal Government “Can Afford Anything”

House Budget Chairman Says the Federal Government “Can Afford Anything”

“It’s not a question of what we can afford. The federal government can afford anything that it feels it needs to do and right now that’s what we ought to be focused on.” 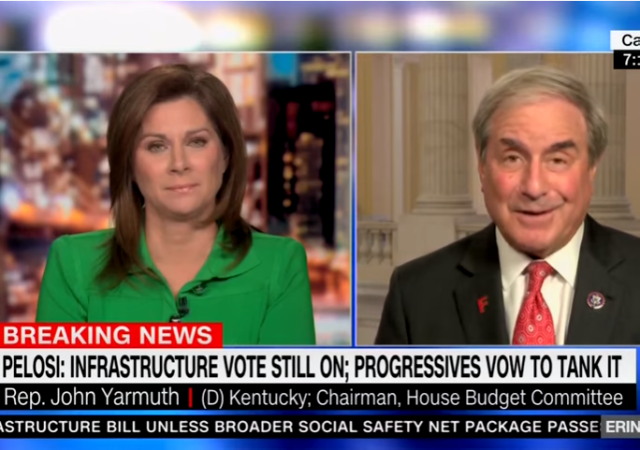 Rep. John Yarmuth (D-KY) serves as chair of the House Budget Committee. During a recent appearance on CNN, Yarmuth downplayed concerns about the cost of the massive infrastructure bill, and said that the federal government can “afford anything.”

There are way too many people serving in Washington, DC who believe this is true.

Here’s the transcript of Yarmuth’s comments, via Real Clear Politics:

REP. JOHN YARMUTH: The number itself is meaningless. I mean, I read Joe Manchin’s statement, I’ve listened to him, he has no understanding of how the federal government monetary system works when he compared it yesterday to his household income, that has no relevance to what we can do.

It’s not a question of what we can afford. The federal government can afford anything that it feels it needs to do and right now that’s what we ought to be focused on. So that’s kind of the position I took in the budget committee, that’s the position I will take going forward.

The shame is that we have an opposition party, the Republican Party, who doesn’t think the federal government has any obligation to do anything about providing childcare, early childhood education, paid family and medical leave, any of the things that are in the Build Back Better Act.

Most people cannot even conceive of how huge a number a trillion is, but the Democrats want to spend almost four of them. And now slightly smaller numbers are being talked about as compromise. It’s insane.

Brian Riedl of the Manhattan Institute writes at the New York Post:

Only in Leftieland is $1.5 trillion considered a ‘compromise’

You know things have gone crazy when a trillion dollars is considered a compromise.

Yesterday, Sen. Joe Manchin (D-WV) insisted he cannot support a reconciliation bill costing more than $1.5 trillion — $2 trillion less than most Democrats want. And he insisted that this bill must be fully offset.

“I can’t support $3.5 trillion more in spending when we have already spent $5.4 trillion since last March,” he said. “At some point, all of us, regardless of party must ask the simple question — how much is enough?”

Manchin’s Democratic colleagues continue to express exasperation, saying they had already compromised down from Bernie Sanders’ $6 trillion demand. Progressive activists on social media have erupted that Manchin may as well join the Republicans.

We better hope this bill fails. Democrats are driving the country straight over a cliff.

They take a tiny percentage of a huge flow of funds through Washington DC. The more flow, the more their take. They can afford anything.

Well, of course this is true. Look at Fauci’s paycheck. And that’s for negative value received.

If he did anything positive he would be fired.

This attitude is why we can’t have nice things.

What a pathetic excuse for an intellect. Were we to conclude that he is simply lying, he would look better than he does today. Yarmuth lacks the self-awareness to realize what an imbecile he is.

It’s been tried many times to print what money you want and fails every time, but why not try again ?

Yes, Komrade. THIS TIME we’ll put The Best Men™ on it.

When I hear Romney criticizing the Progressives for derailing the “bipartisan” reconciliation bill(s), I am not hearing that those bills are a disaster but that the left has upset the kabuki process. What just happened will force the Gang of Romneys, and they are legion, to step forward, drop their masks and once again deliver victory to the Uniparty once the Democrats fail (aka snatching defeat from the jaws of victory).

As always, I’ll believe these bills are dead once they are dead. Until then, so long as Pelosi, McConnell and the decepticon squishes are wheeling and dealing in their chambers, we have to assume we are going to lose.

So let the FJB steamroller roll on!!! MAGA baby!!!

I’ll believe these bills are dead when the morons pushing for them are dead or out of office.

These are not one time spending programs, these programs won’t magically go away in the years the money is allocated in the bill. We all know these social spending programs are on automatic renewal.
We are nowhere close to a balanced budget even if all the new proposed taxes are enacted. Hyper inflation is real as are tax breaks for those who don’t need them such as tax credits for the wealthy if they buy an electric car or the wealthy who get their SALT deductions back. Do the very wealthy need paid family leave?

The federal government can afford anything until it can’t. And when that happens it’s going to be ugly.

So we have Yarmuth who’s running the House Budget Committee and Bernie Sanders running the Senate’s. There’s a great pair if you think social spending galore is great and tax cuts are evil.

Plus Manchin was a governor before he came to the Senate. He knows something about governments and budgets so regardless of the fact he’s OK with a crap sandwich that meets his standards to say he’s ignorant of how all of the process works is incorrect.

Manchin and Senema forcing the decepticon squishes to come forward and take ownership of these bills that they so desperately want. The Pelosi/Schumer/McConnell kabuki was thrown off schedule when the radical leftists insisted on having a vote last week or no deal. The deals isn’t dead, it just needs rescheduling around a updated kabuki script.

Maybe he’ll shoot (fill in the blank) to try and impress Jodi Foster one last time.

If the Federal Government can afford anything then why are any of us taxed?

Of course the Budget Chairman says that! It’s not his money that’s thrown away!

Does the budget chairman ever balance a checkbook. Money does not miraculously obtain and hold value when the people they are taxing have all been driven below the poverty line.

Right up until the dollar becomes a worthless currency that no one will accept as payment for goods and services.

At which point your government will force manufacturers, merchants, and service providers to give you what the government has decided everyone must have, for free.

“Right up until the dollar becomes a worthless currency …”

Democrats are driving the country straight over a cliff.

And it’s deliberate. That’s the plan.

Once they’ve totaled America they can really get to work ‘building back better’. Using Marx, Lenin, and Mao as their guides. Including the ‘mistakes’ they made in the past.

We should all start demanding payment in gold.

Venezuela, once a very rich country, just did not do it right. Also, what political mandate does he think he has – basically 50/50 in both the House and the Senate?

Wait until we have to emulate Venezuela and start dropping zeros from our currency.

He’s right that the federal government can afford anything that it truly needs. We afforded WW2. If we were facing an actual crisis, rather than an imaginary one, we could and would spend whatever was needed to overcome it. If the seas were actually rising and we needed to build dikes, or alternatively to relocate the entire population of low-lying areas, we would do it without a murmur, and deal with the economic consequences later. (Dikes would probably be the more sensible solution.) If Congress decided to build a border wall after all, none of us on the right would be complaining about the cost.

So he’s right when he says “The federal government can afford anything that it feels it needs to do”. The problem with the various proposals is that very little of that spending is needed. Some is, and there’s no dispute that we should spend that amount. But it doesn’t amount to much.

The shame is that we have an opposition party, the Republican Party, who doesn’t think the federal government has any obligation to do anything about providing childcare, early childhood education, paid family and medical leave, any of the things that are in the Build Back Better Act.

It is time for the readers of this site to visit: https://www.nakedcapitalism.com/
This is a Modern Monetary Theory (MMT) site.
The MMT purveyors believe. Their answer to MMT failures are the same as the failures of socialism. “It wasn’t done right”.

So Rep Yarmouth. tell me why the bill does not abolish the IRS?

People generally do not have a grasp of the magnitudes.

And now Dems are talking like Billions is pocket change and Trillions is where it’s at. These are huge numbers they are talking about, and most of it isn’t for what they say it is for. Additionally, like Milhouse pointed out, they have no authority to spend money for these purposes.

This isn’t so different from the “guns & butter” spending by LBJ and his Democrat majority during the mid-late 1960’s (plus an extra “0” or two)..

Wait for a) exacerbating inflation (blamed on “profiteers”); b) govt price & wage controls (more power & control), and c) very high interest rates as who would buy 30 or even 10 year bonds from these idiots?

Cue the printing presses as an alternative to usurious taxes, which will mean more money chasing, basically the same amount of goods and maybe fewer services as work is replaced by Universal Basic Income (!).

It was a long time ago, and the 1970’s were a very painful decade, but in the early 1980’s, Paul Volker and Ronald Reagan (supported by Kemp-Roth) fixed a decade-old problem of stag-flation.

But for now, “winter is coming”