“Kendi tweeted out a story about how white university applicants identified as people of color for better treatment. He deleted the tweet after realizing it didn’t advance his argument of systemic white privilege.”

Ibram X. Kendi, the leading proponent of the “antiracism” variant of Critical Race Theory, tweeted and then deleted a message this weekend that contradicted pretty much everything he is currently pushing in education.

Apparently, he quickly realized he was making a case against his own arguments when people called him out on it.

It all started with this story from Christian Spencer of The Hill:

More than a third of white students lie about their race on college applications, survey finds

A survey from Intelligent found that 34 percent of white students who applied to colleges and universities falsely claimed they were a racial minority on their application.

For the most part, Intelligent found, these white students tended to get away with their lies. About 3 in 4, or 77 percent, of white applicants who faked minority status on their applications were accepted to those colleges.

“While other factors may have played a role in their acceptance, the majority of applicants who lied and were accepted (85%) believe that falsifying their racial minority status helped them secure admission to college,” Intelligent wrote in their report.

Here’s a screen capture of the tweet Kendi published and then deleted: 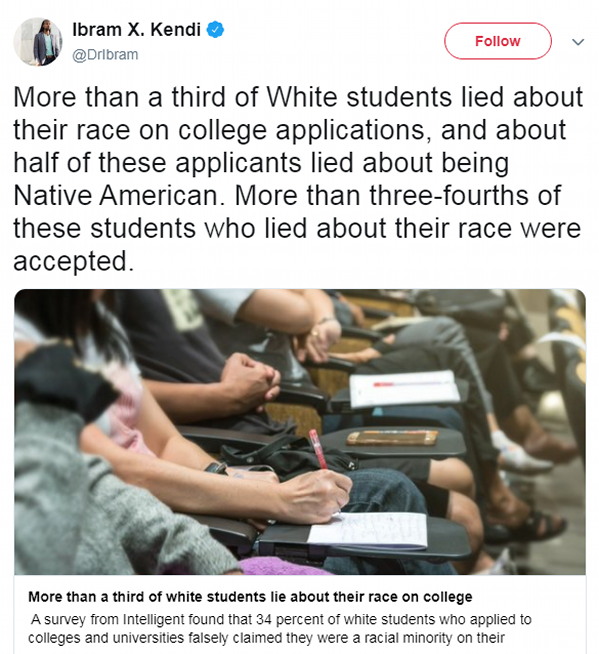 tfw you accidentally blow up your entire life's work in a tweet and have to delete pic.twitter.com/wvxJsAyDsR

Celebrity critical race academic Ibram Kendi tweeted out a story about how white university applicants identified as people of color for better treatment. He deleted the tweet after realizing it didn’t advance his argument of systemic white privilege. https://t.co/CLhUF8cxOm

Kendi deleted this tweet after a bunch of people pointed out it undermines his whole worldview that the US is an incredibly racist country where the system is rigged exclusively for White people. pic.twitter.com/eGY8idK8KM

Kendi is pretty defensive about his screw up.

Here is their tortured line of thinking: When White applicants *think* they have an advantage by lying about being a person of color then that means they *do* have an advantage which then means structural racism doesn’t exist.

If that’s true, why did he delete the tweet?

Guilty white liberal that propitiated no crime telling minority they are victims of crimes never committed and FOOLS like Kendi drink the Kool-Aid right down.

Kendi isn’t drinking anything he’s participating in the willful destruction of Western Civilization and in particular American Exceptionalism. (How long has it been since you.ve seen or heard that phrase?). I would suggest as a hate filled leftist he’s doing this willfully, conscientiously, and with malice but intending his own benefit in both wealth and position.

He is what was commonly known as a “quisling”. His kind of hate is generally caused by an inferiority complex in conflict/conjunction with narcissism and reinforced by the leftist predilection for envy and jealousy over anyone better off than they. It’s Karl Marx 101.

This America hating slob is not a “victim” so don’t treat him as one. Make no mistake, he is a perpetrator. An advancer of racist hate and the same type of person who reported the Jew next door to the Stasi for deportation to death camps.

He would murder you and your family in the blink of an eye and believe himself a martyr for doing so. Just like any obedient Nazi or Commie.

Kendi has good reason to have an inferiorty complex.

If a man can identify as a woman and politically correct demand that everyone agree that the person is a woman, then what’s wrong when a white person identify themselves as another race?

Clearly, to be consistent, the politically correct should endorse this!

We told Our kids they could be President. Now kids have so many more options if they are creative on their applications

Chris Rock says to hug your daughters to keep them off the pole. Now it seems that being on the pole is a quick ticket to the Vice Presidency. What is a caring dad to do?

This clown is just another grifter, bought and paid for.

As for his ‘intellect’ – what intellect?

Had a dream Ibram X was accused of sexual harassment. By a blonde, blue eyed Caucasian. Dream ended with him accusing her Of using her white privilege to oppress him.

Hmmmm, not quite the towering intellect he and the left think he is.

Indeed. Kendi is an academic in the loosest sense of the word like most people who teach Studies.

* Anything ending in Studies.

Kendi’s counterargument — that the benefits of identifying as a minority are imagined by whites but do not exist — clearly does not apply to financial aid conditioned on minority status. It also doesn’t apply to so-called diversity admissions which consider race and ethnicity as positive factors.

The Marxist fraud exposed his Leninist lie and his greedy grift all in one tweet.

Kendi and the other purveyors of this privilege theory have misidentified who possess privilege. They looked around the academic and other somewhat cloistered communities of wealth, influence and power and simply made a false conclusion. They saw ‘white people’ who were largely in positions of power and concluded that all ‘white people’ were members of this influential group.
Privilege as they define it definitely exists but the membership is narrow and insular. Nor is that privilege confined to ‘white people’.

The point is privilege does exist. However it isn’t based on race but on association and existing family membership within the elite class. For fifty years there has been a supplemental admission for ‘non whites’ with near competitive academic performance at the expense of a colorblind merit based criteria. A diploma from an elite institution is the golden ticket for entry into the organs of elite membership, success and privilege not just for the individual but for their offspring who will qualify for legacy admissions perpetuating the mostly closed system.

I agree completely, except that an increasing number of businesses are aware of the scam and have developed countermeasures.

The owner of one business I know of sends resumes from Ivy League graduates to the circular file without reading them.

Small engineering-only schools are being created.

Always come back to this:

There is a class of colored people who make a business of keeping the troubles, the wrongs, and the hardships of the Negro race before the public. Having learned that they are able to make a living out of their troubles, they have grown into the settled habit of advertising their wrongs-partly because they want sympathy and partly because it pays. Some of these people do not want the Negro to lose his grievances, because they do not want to lose their jobs.

Irony can be so ironic.

I foresee a time, in the near future, when schools are going to require DNA tests. If your DNA is incorrect you don’t get admitted. DNA analyzation would’ve been a dream for the German government 85 years ago.

I heard an interview on NPR today. The proliferation of DNA testing has more people claiming multiple ethnic identities on the census. The argument against recognizing DNA as a defining fact is that “they did not grow up black”. The discrimination argument is cultural.

Dhimmi-crats truly are the most manifestly stupid people in American society. Dumber than a box of rocks, and, nowhere near as useful.

In the New World Order, stand with the Hutu to slaughter the Tutsi, the Luo elite to enslave lower class males and hold females as breeding stock, the Mandela-led Xhosa to lynch the Zulu and force apartheid, the communists to manage the viability of their Posterity, and collude with the transnational socialists to spread diversity, inequity, and exclusion. Diversity [dogma] breeds adversity. All’s fair in lust and abortion, I suppose.

This race-hustling fraud found himself accidentally admitting that two diametrically opposed things both cannot be true. Fooling people into believing the opposite is the foundation of his variant of CRT.

Country was better off when his kind use to be called “street hustlers” as they ran three-card monte and shell games. People got burned but at least they also hard learning opportunity.

If Kendi’s life work on white privilege was accurate, blacks would be lying on their applications claiming to be some other race, but in that case they wouldn’t get accepted. It’s been true for a long time that there is no such thing as white privilege, but it doesn’t matter if it’s a lie when a lie works better than the truth.

“Here is their tortured line of thinking: When White applicants *think* they have an advantage by lying about being a person of color then that means they *do* have an advantage which then means structural racism doesn’t exist.”

Unless you have credentials as a mind reader, screw what “he thinks” and “she thinks.” What do the statistics say? Who gets in and who doesn’t get in?

If you were any kind of ‘scholar” you would be able to do the homework and prove your point. Except it wouldn’t prove your point, because it isn’t so. That’s why math has to be declared raaaacist now.

Kendi seems to have had a lot of practice at waving his hands.

I was born in this country, I’m a native American.
Fuck joe biden*.

Grift exposed. Another commie hustler. For several years now, every time I visit my local online PUBLIC library I’ve had to see his sad-ass book pop up as a “first choice” in Black Perspectives. Right. Bye.

It is necessary for us to label the spouted nonsense that comes out of the mouths of these “intellectuals” and call it what it is.

It’s word-salad, because they throw out words that normally would mean something, but jumble into nothing. It’s pretend academic, because they pretend that it follows a scientific or artistic method. It’s not historic, nor do they care. They’ve been co-opted by Marxists, and do not even realize it.