COVID-19 Cases Plunge Across the Country

COVID-19 Cases Plunge Across the Country

Our press fails to note that the South leads the way in dropping numbers while some Blue States are “surging.” 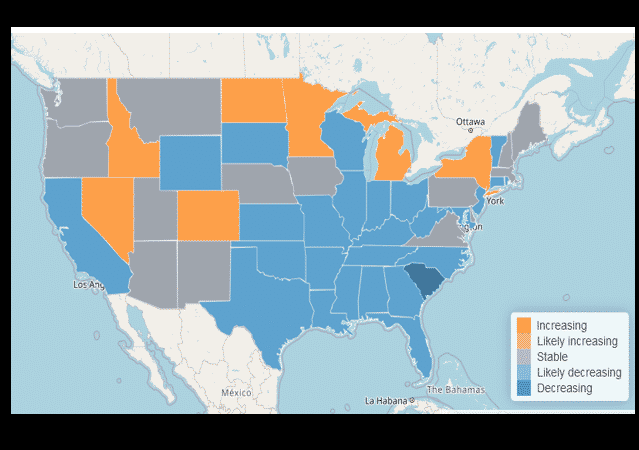 I wanted to take some time, ahead of my autumn color trip, to look at the state of the “pandemic.”

There is good news to be had. The cases of COVID-19 are plunging across the nation.

Right now, daily COVID-19 deaths are averaging about 1,900 a day, according to the Centers for Disease Control and Prevention. Cases have started to fall from their highs in September, from about 160,000 cases to about 103,000 cases per day. But there is fear that the situation could worsen in the winter months when colder weather drives people inside and into closer proximity with each other.

A look at the 14-day change in numbers shows that the South, derided when cases were surging in the region, has dropped significantly. The following numbers are from The New York Times, hardly a bastion of Red State support. I have highlighted the numbers from several southern states, as the publication seems uninterested in spotlighting this development. 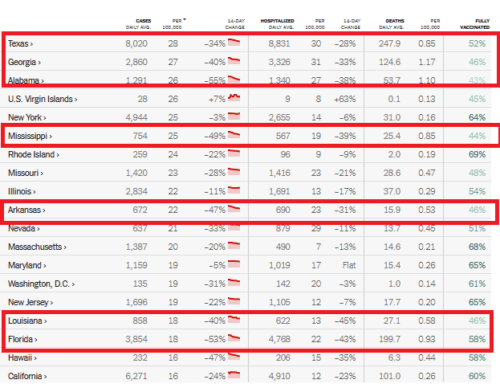 Arkansas had one of the most significant plunges in caseload.

New data released Monday by the Arkansas Department of Health showed that active cases of COVID-19 in the state took a huge drop, falling by more than 1,000 in a day.

The ADH figures show the active case count went down by 1,008, which brings that down to 8,535. Hospitalizations dropped by 20 from the prior day to 669.

“With a large drop today we have nearly 3,000 fewer active cases than last Monday, a hopeful sign that we are moving back in the right direction, but COVID-19 is still a serious virus and getting vaccinated is the best way to continue this downward trend,” Governor Asa Hutchinson said in a tweet.

Another analysis from the Centers for Disease Control shows that Florida had the steepest decline in new cases.

It appears that Gov. Ron DeSantis’ blend of early treatments, no mandates, and vaccine distribution has worked exceptionally well. It would be nice to see the governor get credit for making successful choices based on science and reason.

Now, new reported cases and hospitalizations are both down to near record lows as the state’s vaccination rate has risen and some people have gained temporary immunity after being infected. Florida has fully vaccinated 58% of its total population and 67% of people ages 12 and up.

But as it goes against the media narrative, it is an observation that is not likely to appear anywhere in mainstream news.

I would also like to contrast the above data with that from the Blue States, several seeing significant surges in COVID-19 cases (despite higher vaccination numbers). 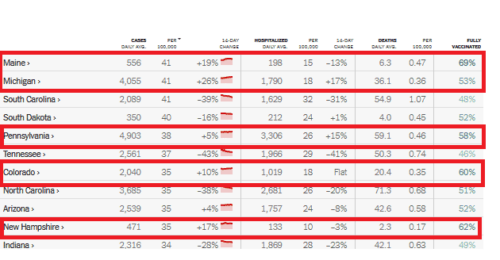 For comparison, Pennsylvania officials are promising that a downturn is just around the corner.

A look at Pennsylvania’s data doesn’t show a decline yet, though projections show a plateau in the next few weeks.

“One of the most dangerous parts of mountain climbing isn’t going up there. It’s the descent,” Nathan Harig, assistant chief of Cumberland Goodwill EMS said. “A lot of people get hurt and injured because they let their guard down. They try to rush through things. So it’s very important that we continue doing all that we can to be protected from COVID and that means getting vaccinated.”

Harig says diversion requests from hospitals have gone down, especially with a new one open in Cumberland County, but “There’s still stress on hospitals,” he said. “They’re releasing their numbers regularly and their numbers show that it is an unvaccinated population that takes up a lot of these bed space and intensive care resources.”

I do not belittle the efforts of Blue State officials. I have noted several times that this disease will come in cycles. However, the failure to acknowledge the downward trends as robustly as the surges show that our press is infected with a terminal case of smugness paired with a rash or irresponsibility.

Finally, this is probably a good time to look at the national reproduction number, which measures how many cases one infected person will cause. The reproduction number represents the potential for one sick person to spread the infection. The lower the number, the better — and less than one are best.

The national reproduction number is below 1, at 0.92, and a current map of trends is below: 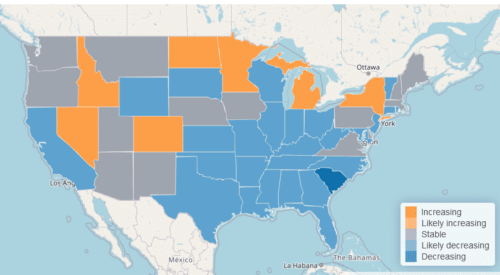 By any reasonable means, the time has come to transition back to a normal life.

We are finally achieving herd immunity. In the South and West we saw cases skyrocket in the late summer when people gathered in Air Conditioning. And, we brought back school kids. And, the majority of these people ended up with low grade fevers and stuffy noses. Many saw no impact at all. The North has not yet finished the process.

That’s rather inconvenient for Democrats eh. How will they keep the people afraid and maintain postal voting if no one is dying from the Chinese virus?!?

By an Executive Order for all postal voting that is never formally filed, and only spoken on TV.

Easy. They’ll just release another one.

The data from Britain (NHS) indicates that the cases (and in reported earlier this year the risk of progressive viability i.e. abortive) in the highest risk cohorts are rising for fully vaccinated individuals.. This is probably the same effect as the masks, where there was viable legal indemnity, but efficacy was overestimated/misinformed, thus increasing comprehensive risk and exposure/transmission.

Still, whether natural immunity, or the less robust and durable vaccinated immunity, or conditional exposure and disease progression, there is positive development of community immunity.

This is basically the standard Gompertz curve/wave typically of all pandemics with the only difference being larger since it is a new virus.

These waves are matching the way mother nature has always done

Democrats do not care about our history. They change it to fit their narrative— they tear down our statues, rip up our constitution and replace them with the lies of CRT and the 1619 project and then tell us our lives don’t matter. As for where they’re going—the country is going to hell in a handbasket and they plan to take as many with them as they can.

Thanks. I see that now.

They may plan to take us all to Hell with them but it ain’t happening ! They have activated the “12-07-1941 Effect”.. they have awakened a sleeping giant. Outraged parents are the nidus of just one part of this awakening and it is scaring the $hit out of the elites. Vaccine and mask resistance is getting stronger, Federal government is at its lowest level of trust in recent history.
USA going to Hell, it ain’t happening.

You mean there might be factors other than political affiliation that drive case rates? You don’t say!

natural immunity is kicking in.

Ironically importing hundreds of thousands of ‘rona cases with the illegal immigrants has done more to control the virus than anything else they did.

They made me wear a mask at the doctor’s office Friday — was it me?

Nothing is more comforting than making my daily LI run, and being deluged with many copies of an ad exhorting me: “Democrats — you have the power to deliver on citizenship for immigrants! Support LUCHA!”

It’s endemic, and at least in the US there is at least one sign that authoritarians will ease up.

The following is from Tom Woods’ daily email to his subscribers:

“Lucy McBride is a physician who has her own COVID newsletter and who moves easily in MSNBC and Atlantic circles [ . . . ] :

‘We’re starting to reach the acceptance phase of the pandemic: a time when we must recalibrate our individual risk gauges, which have been completely thrown out of whack

The two things that patients want—reassurance that they won’t get COVID-19 and permission to engage in life—I cannot deliver, and I never will be able to. SARS-CoV-2 is here to stay.

The virus will be woven into our everyday existence much like RSV, influenza, and other common coronaviruses are. The question isn’t *whether* we’ll be exposed to the novel coronavirus; it’s *when.*

The acceptance phase begins with a broader reckoning with risk. It ends, I hope, with clarity on what we actually can do as a society to protect life—and a commitment to do it.

Of course no one wants to get COVID. The Delta variant continues to take lives and cause lasting harm for many. But abstinence from living isn’t sustainable, nor is it healthy.

As we head toward endemicity, we can think about what we have to accept, what we can change, and how we tell the difference between the two.

Acceptance can also be the birthplace of change. COVID’s permanence does not mean simply reverting to life as it was pre-pandemic. After all, the pandemic has laid bare our countless personal and public-health vulnerabilities—and offered opportunities to do better.

We can make people healthier and safer without surrendering to a permanent pandemic lifestyle.

Acceptance is not about agreeing with or surrendering to suffering. It is not about reckless abandonment of caution or carelessness toward others.

Public-health experts will be responsible for deciding where the off-ramps are for restrictions such as mask mandates in public places…But we, as individuals, are responsible for dusting off our pre-pandemic instincts and imagining living again.

Doctoring isn’t about walling off patients from certain exposures. It is about acknowledging our messy world and arming patients with tools to safely inhabit it.

It is ludicrous to say that Trump supporters or Trump is why Covid cases in the blue states are up and down in red states.

It is seasonal, and driven by the concentration of people congregating indoors, temperature, and humidity. Since the math of spread is exponential, it is very sensitive to conditions on the ground. I have no doubt that the northern states will get hit very hard this winter, and then new variants will sweep next year.