“The woman suffered pain and swelling to the face, back pain and abrasions to her body.” 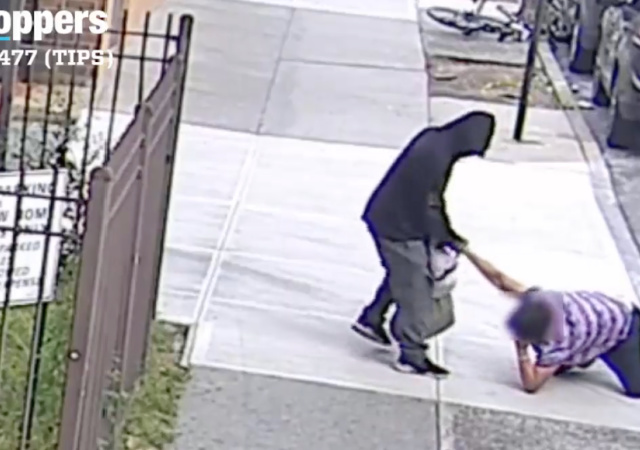 The NYPD released a video of a man chasing, punching, and dragging a 65-year-old woman in an attempt to steal her purse.

We are asking for the your assistance in identifying this male who is seen in the below video violently attempting steal a purse. The incident happened near Willoughby Avenue and St Edwards Street on September 28, 2021 just before 5pm. pic.twitter.com/bPaXpvcvym

Surveillance video shows an unidentified suspect ride up on a bicycle, dismount and immediately begin to run after the woman, chasing her down the block and into the middle of the street.

He grabbed her purse, but when she resisted, he punched her in the face multiple times before dragging her to the ground and punching her again, the footage shows.

Police said the victim was able to retain her purse, which contained money from collecting and cashing in aluminum cans.

The would-be thief fled the area on his bike empty handed, according to authorities.

The woman suffered pain and swelling to the face, back pain and abrasions to her body, officials said.

Will this ever end in NYC? The department showed a video of a woman tossing boiling water at a deaf man before stabbing him in the chest:

The 41-year-old victim was sitting outside on Humboldt Street near Boerum Street in Williamsburg around 6 p.m. Sept. 2 when a woman began arguing with him, police said.

She then chucked a cup of boiling water in his face and stabbed him in the chest with an unspecified sharp object, cops said.

Mayor DeBlasio’s new program is to pay criminals $1,000 a month in the hope that the criminals will then no commit crimes.

This is not a typo. His plan is to reward criminal behavior.
https://www.lawofficer.com/mayor-de-blasio-advanced-peace/

PROGRESSIVES = WOKE TILL THE TAXPAYER IS BROKE.

This is also happening in San Francisco only it’s $500.

And that’s a big IF since he eliminated the plain clothes units most adept at catching these kind of scumbags.

I’m so glad this woman was not armed. Somebody might’ve gotten hurt.

Yes, yes, we all say! But, will Officer Friendly stand down?

Someone should have been hurt, or worse.

Oh, I fully agree. There was a time when such money-shines were not tolerated, and were dealt with firmly.

Gee. Did that sound racist?

Problem/ BUG … The comment I made is not appearing.

I tried to post again and got an error message saying it is a duplicate posting. As you can see there is no other posting from me on this thread.

Still not working. Maybe they are not that stupid ?

It finally worked – see about 6 comments below.

I don’t know why you can’t see it, but it’s the first comment on this thread.

I didn’t see it at the time either. There was indeed a delay in posting it.

Don’t forget light rail, and to knock the traffic signals out of sync to upset the motorists and make them want to ride the light rail…

this is new york. look at the perp. nothing will happen with letitia in charge.

I am sure that the perp is really a good boy, college bound.

Plus he and his “girlfriend” were engaged and planning their wedding while he worked two, sometimes three, jobs to help out his mother. In other words, he had turned his life around, was on the straight-n-narrow, and vowed never to return to his former self.

He gonna be a doctor.

There is plausible cause under the novel apology for self-defense, that she could be perceived to pose a clear and progressive threat to her attackers.

A double-edged scalpel, maybe. The man presented a “burden”. It was her Choice and rite to exorcise him in a socially forward manner. Here’s to diversity, inequity, and exclusion to foster social progress.

There were numerous instances in that tape where she could have bit his arm.

Teeth make for a good weapon, and human bites are nasty in terms of infection.

If in a pinch, start biting like a wild animal.

It’s Neew York. They’d get busted for taking the law into their own hands.

Things are so convoluted and crazy with New York law that I really don’t blame anybody for not trying to help. You really don’t know what kind of trouble you get into. The part of the country I live in, you’d be commended for it.

That upset me, too. Maybe it is an artifact of where I live. How the hell do you see a man mugging an old woman and just turn away?

What the hell causes that?

Knowing that there is some law, somewhere, on some book, that the cops and the DA can use against you.

The perp is in a protected class.

Mayor DeBlasio’s new program is to pay criminals $1,000 a month in the hope that the criminals will then no commit crimes.

This is not a typo. His plan is to reward criminal behavior.
https://www.lawofficer.com/mayor-de-blasio-advanced-peace/

PROGRESSIVES = WOKE TILL THE TAXPAYER IS BROKE.

You know, she should have used her teeth.

Human bites are worse than dog bites in terms of infection. A well placed human bike can sever a tendon or two as well.

Think of your teeth as a built-in weapon.

She would probably get infected blood in her mouth

Indeed. A finger jabbed deep into an eye socket is also HIGHLY effective.

Strep infections are extra dangerous because streptococci is on the immune system’s whitelist of “good bacteria” and won’t be fought aggressively.

The strep in your mouth are isolated from the rest of the body by the mucus linings of the throat and esophagus, and killed off by stomach juices when swallowed.

Sounds like a great way to get a disease.

This is a metaphor for how the GOP treats us….

“11 Republicans joined all 50 Democrats to provide the minimum 60 votes needed to end debate and move the bill to final passage, which required a simple majority. None of the Republicans who voted to end debate also then voted to pass the final bill. But for that, Democrats needed only 50 votes, because at least one Republican, Sen. Richard Burr of North Carolina, was not present. The eleven Republicans who voted Yes — Barrasso, Blunt, Capito, Collins, Cornyn, McConnell, Murkowski, Portman, Rounds, Shelby, Thune. House action is expected next week. Staves off default until December. ”

If police arrest him prosecutors won’t charge him.

Then, this lady’s friends and family need to find him and have a necktie party.

I don’t see the problem. Everything non-blacks do is racist.

Our government has invented something previously thought impossible. A form of authoritarianism that increases common crime.

The reality is simple – neither the police nor the politicians want the guy apprehended. If they did they would describe what he looks like using all the general “tones” of CRT. The victim and others on the street know what he looked like. And, could likely confirm it was a “male” regardless how the attacker self identifies. … And, let’s compliment those “good neighbors” on the street who chose to do nothing, and of course the “first responders” who obviated the need for the victim to have the tools present to defend herself. … As well da Bla who is ultimately in charge except most of the time when he is not; was his kids “concierge service” staffed out of that local precinct ?

I know that area somewhat. It’s a few blocks away from my doctor. It’s… not such a good area. I’d be reluctant to walk there alone after dark.