“We don’t have food to give them. We either feed them or we feed us.” 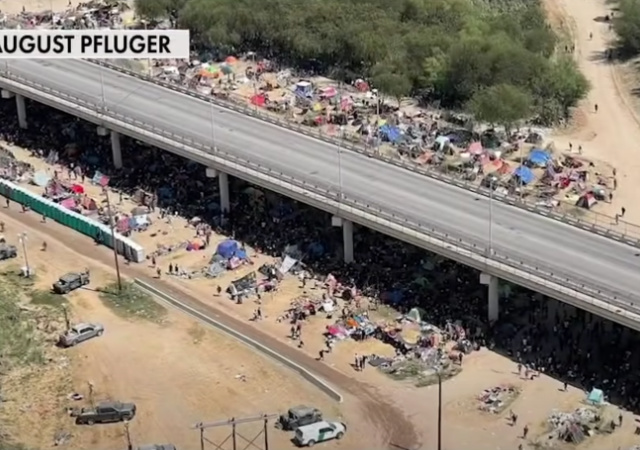 Del Rio, TX, has seen a migrant surge in recent months. The Panama foreign minister warned the Biden Administration that tens of thousands more would make their way to the border.

Biden has ticked off a lot of Del Rio residents. A few feel bad for the migrants and want to help but don’t have enough resources. Others are frustrated because their family members in other countries are trying to come here legally and wait a long time.

Fox News published a video today with interviews with the residents:

Laura, who grew up in Del Rio, said she felt the Biden administration took a long time to handle the situation.

“It’s been mounting bit by bit,” she told Fox News. “It’s not just a thing that happened over the course of one week.”

Diane also would like the authorities to “take care of our own people…our poor people…our vets.”

One person blamed Biden for the influx. Another person thought it wouldn’t happen if Biden hadn’t made promises during the campaign to immigrants.

Restaurant owner Miguel Chavez felt Biden did as well as he could with over 12,000 migrants in the recent surge.

However, Chavez described Del Rio as a hard place to be: “I see their problems and I try to feel for them, but we have our own problems.”

The Tablet, a publication of the Diocese of Brooklyn, spoke to Father Jaime Paniagua of St. Joseph Catholic Church. He understands why, but it frustrates him that those who go about immigration the right way have to wait so long while people who storm the border can come in.

However, once migrants come across the border, Father Paniagua will help them:

“For us, as a Church, we need to serve. We need to protect human dignity,” Father Paniagua said. “Through Catholic Charities or through a fund that we have that people have donated to help immigrants, we get them a bus ticket, an airplane ticket, give them some hotel nights, get them food, give them clothes, medicine, whatever is needed.”

The Tablet published views by others in Del Rio:

In one part of Del Rio — with his yard practically up against the black, metal border fence — a man that would only disclose his last name, Riveras, said he was unbothered by the latest crisis. As an immigrant himself, who regularly goes back and forth across the border, he called the current migrants’ situation “sad.”

“It didn’t frustrate me at all,” he said. “I tried to help those guys out by bringing food and clothes over to [Ciudad Acuña, Mexico].”

Gilbert Maldonado, a Del Rio resident and parishioner at one of the city’s Catholic churches, has a different view. He called it “intense” to have 15,000 people underneath the International Bridge at one time, and he doesn’t agree with many of them getting a free pass into the country.

He said he knows a woman in Mexico who could not obtain a visa appointment for her daughter — to stay in the U.S. with her grandmother — until October 2022.

“That little girl is going through the process to get a visa, and she doesn’t get a free pass to come here,” Maldonado said.

He added that he knows “a lot of people that are doing it the right way” and “are upset that these people were just let in.”

Val Verde County Sheriff Joe Frank Martinez, who has lived in Del Rio his whole life, wanted everyone to know that illegal crossings have been a problem for a long time in Del Rio:

He remembers that, back in February, some Del Rio citizens were asking, “when can we shoot?” And in one specific instance in September, a woman came out of her house and fired four gunshots in the air, saying in Spanish that “these individuals in my neighborhood, they’re not going to mess with me!”

“My concern is someone is going to kill one of these individuals for knocking on their doors or asking for a glass of water, asking for something to eat,” Martinez said.

Martinez pointed out that migrants walk to the end of the border fence. It makes sense residents are frightened. You do not know who is crossing the border.

Plus, Martinez knows a wave of people in a small town causes a tremendous burden on the infrastructure and resources.

The Daily Caller interviewed residents as well. Quite a few of them brought up the lack of resources in the small town. They do not have enough for themselves, let alone tens of hundreds of migrants:

“We don’t have food to give them. We either feed them or we feed us. It’s ridiculous for the federal government to think that we’re picking up the slack with our taxpayer money,” Bea Vallejo, resident of Del Rio for over 20 years told the Daily Caller.

“And then they tell us they’re going to ship [the migrants] out. You’re going to send [the migrants] back to Haiti… And you lied to us. You don’t ship them out. Yes you ship some out, yes you fly some out… You’re sending them, and shipping them out to another city in the United States. Someone else’s neighborhood,” Vallejo added.

[catastrophic] [anthropogenic] Immigration reform in lieu of emigration reform, and a border without a wall to mitigate casualties and direct safe contact.

What’s the point of “unloading” on Biden? Five minutes later he’ll forget what they said, or that there’s a border, or that his name is Joe.

He “forgets” before he even hears what is said as he does not care what anybody thinks other than his handlers — his source for money and power. Further, the goal is to destroy Texas by making it into California.

“The Tablet, a publication of the Diocese of Brooklyn, spoke to Father Jaime Paniagua of St. Joseph Catholic Church. He understands why, but it frustrates him that those who go about immigration the right way have to wait so long while people who storm the border can come in.”

Tell him to petition the Vatican. Francis is 100% down with this clown show — now he needs to ante up to subsidize it. Auction off a Raphael, or whatever. Nothing’s too good for the poor we will always have with us.

Unload all you want. They have the power and violence of the government. They don’t give a shit what you say, they’re taking over and they aren’t giving it back.

Why would a man who was elected with millions of bogus votes care what actual voters have to say?