Are Biden and the media in a quest for non-COVID reason to fire Dr. Anthony Fauci? 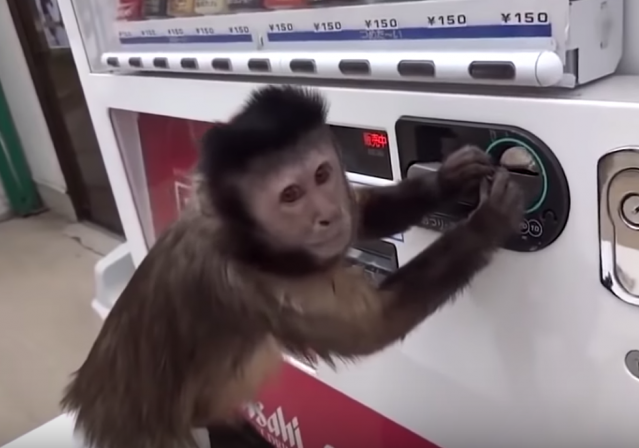 We reported that Dr. Anthony Fauci and other officials from the National Institute of Health (NIH) were likely to face a bipartisan panel of congressional representatives, who would gill them all on horrifying experiments involving beagle puppies.

Now NIH officials will likely face questions about funding for a set of grotesque experiments on monkeys.

Members of Congress are calling on the National Institute of Health (NIH) to supply information on testing on monkey brains following a watchdog group’s release of videos of the testing.

“New reports about disturbing taxpayer-funded experiments on monkeys at the National Institute of Mental Health (NIMH) in Bethesda, Maryland, demonstrate why more Congressional oversight of NIH primate research is urgently needed,” lawmakers wrote in a letter sent to the NIH Friday.

“We have serious concerns about whether this questionable research deserves the continued support from Congress and taxpayers,” they added. The lawmakers called for the NIH to provide information on the tests.

Humans share over 90% of their DNA with their primate cousins. Therefore, it would be reasonable to assume that animal protections are put in place for these studies. Furthermore, one would hope the research would have to cross a very high bar in showing exactly why these tests must be conducted for the benefit of humans.

However, it appears such rules didn’t apply to studies being funded by the NIH. Watchdog the White Coat Waste Project (WCW), which has been gathering data and had a report prepared in 2019, alleges that the experiments have cost nearly $100 million just since 2007.

Since released video footage of the testing showed distraught primates chained in tiny cages as researchers surprised them with rubber spiders and mechanical snakes – objects they instinctively fear – to observe their reactions.

The NIH scientists then removed portions of their brains or destroyed them with acid to ‘intentionally worsen the primates’ fear’.

‘In the video, a callous NIH ‘white coat’ can be heard joking, ‘Where the hell is the dancing monkey?,’ after one of the tests on the terrified monkeys ends,’ the WCW report states.

The videotaped experiments, according to the group, took place at he National Institutes of Mental Health (NIMH) in Bethesda, Maryland and have ‘cost taxpayers over $16 million since 2007 and $1.7 million in 2019 alone.’

One must ask why damning information about Fauci and the NIH, available in 2019, is coming out now.

My theory is that both the Biden Administration and the media need a non-COVID reason to remove Fauci.

…Biden built his presidential campaign around his assertion that he would “shut down the virus, not the economy.” Accordingly, his approval rating has slumped and risen along with U.S. infection and death rates. The number of COVID cases nationwide is again on the decline—and, some Democratic strategists say, that gives the administration an opportunity to change the tone of the discussion around the virus. Biden now has a chance to depoliticize the issue with an action that is suddenly less controversial than it would have been just days ago: Fire Anthony Fauci.

The data suggest that with the media focusing on the experiments, Fauci will be thrown under the bus in Biden’s quest to raise plummeting poll numbers. I suspect that the tactic will not work in the long run.

This is not exactly impressive. People – human beings – are getting fired from their jobs because of government mandates to take a potentially dangerous vaccine. The economy is in free-fall. Governments across the globe are using the Wuflu to let their inner Stalin run wild with all sorts of totalitarian edicts.

But the Uniparty is is worried about …. animals?

100,000 elders were murdered by being locked into Room 101 with COVID. And the Uniparty “solved” it by worrying about… Democrat groupies.

In all of these reports about the experiments, I notice a lock of reference to the purported purpose of the tests. What exactly were they supposed to be trying to ascertain by doing these things to the animals?

The dog experiments seemed to be testing some new drugs but seem needlessly cruel. I have been under the impression that, at least in the U.S. and other western countries, there are regulations that require the least harmful methods of testing including the use of anesthetics and painkillers which would appear to have been appropriate if the testing was just to determine if the dogs became infected.

Quite like the use of the Wuhan facility for viral research that was banned in the U.S, or using operations in third-world countries to skirt U.S. restrictions on all sorts of practices to reduce costs and avoid scrutiny.

These are either warning shots to keep the rest of the swamp in line because it’s getting restive, or to provide a exit path for Fauci.

The canine experiments were testing a new vaccine against diseases transmitted by the desert sand fly. Who knows what the primate experiments were supposed to accomplish. I would assume something along the lines of how brain damage affects the perception of fear in primates.

“Humans share over 90% of their DNA with their primate cousins.”

So, logically the experiments on monkeys are research for similar treatments for humans.

And hence the point I made in the next sentence.

We share 98% of our DNA with pigs, but you still eat bacon.

How much DNA we share with an organism has squat to do with the ethics of experimentation. You’re anthropomorphizing because chimpanzees look more like us than pigs.

Daniel, Thank you for pointing this out. I think the anthropomorphizing started when people moved off of farms. I appreciate Disney, but they have contributed to the confusion.

Most people have considerable cognitive dissonance about the relative value of humans and animals. Their behavior does not correspond to their expressed opinions.

Even people who kill their own meat take care to do it humanely. If you have to chase a bleeding deer unduly far, you were a bad hunter. We kill beef instantly with bolt guns. We even kill dozens of rattlers humanely on our ranch every year.

Humane-ness is not dependent on anthropomorphisation. It’s about basic respect.

I raise chickens. I’ve had to kill a few. But I make sure to keep them calm and to dispatch them quickly and humanely. I would never hurt them just to do an experiment.

Politicians have experimented on us all. Testing how far they can go to take away more and more of our liberties. The Patriot Act has been used more against US citizens than against actual terrorists.

demonstrate why more Congressional oversight of NIH primate research is urgently needed,” lawmakers wrote in a letter sent to the NIH Friday.

Yeah. Congress can individually approve each grant if they are so critical.

To clarify: Congress should reclaim their authority to determine on an individual basis if the proposed experiment is critical to the advancement of scientific inquiry and not that Congress is rightly critical of these abhorrent and intentionally cruel experiments.

Yet somehow the experiments still going on with millions of human beings? All hunky-dory.

The parents are a “burden”, too. Planned Parent/hood

I suspect that the tactic will not work in the long run.

And I suspect that even if they do fire Herr Doktor Fauci his replacement won’t be significantly better than the Good Doktor himself. They certainly won’t be putting anyone qualified into the position. Just another talking head on the lines of Psaki. That is all.

It is a big club and you ain’t in it. (George Carlin)

It’s a progressive process with “benefits”. Secular lucre, that is.

Just another example of the leftists thinking they can do anything, and they will, until they get caught. There is no excuse for carrying out animals experiments in a needlessly cruel manner–it smacks of Nazism, which I don’t use lightly.

Why Fauci hasn’t been arrested and charged with all of the lying, and other violations, is beyond me. A deeper look into the finances of all of this will probably find that he’s making large sums of money off these programs, the vaccines, masks, and God knows what else. The entire administration of the CDC, NIH and any other federal health agency should be scrapped and we should start over.

They think that they can abort the baby… monkey, whatever, for social progress, cannibalize her profitable parts for medical progress, sequester her carbon pollutants for climate mitigation, and have her, too.

If they can torture, murder and butcher human babies for their experiments, why on earth would they refuse to do the same with dogs and monkeys?

Exactly. The disdain for the sanctity of human life is not restricted to helpless infants. That attitude carries over to the animal kingdom as well.

Note that Biden had pieces of his brain removed in two aneurysm surgeries in 1988 and we may still be living with the consequences. However, someone who lost her husband to Alzheimer’s told me that the clenching of fists recently seen with Biden is a symptom.

Now, with Fauci, quieting him, as with the beagles, might be an improvement (and I have enjoyed the company of two beagles).

What was the intended purpose of torturing monkeys?
What were the actual results? What, if anything, was learned?

It seems anomalous to say it is inhumane to torture an animal but who is not repulsed by cruelty to a cat or a dog?

And a cold and calculating account might wonder what the benefit of spending $16 million or more on experiments that do not seem had any positive outcome.

Does not National Institute of Health have other priorities where the money might be better spent? Like improving health care to humans?

The most evil among us start with the abuse of animals. Do you really think they give a damn about humans?

As a former medical researcher I am a bit shocked to see most of the comments here being driven by emotion. Two issues are missing from all of this: what were the goals of the experiment, and what were the results? Yet everyone is making damning statements without considering either of those two.

The next time you get sick, go ask an animal rights activist for help. They apparently know everything and have all of the answers for future problems as well.