Experts expected 500,000 since benefits ran out and vaccination rates have gone up. 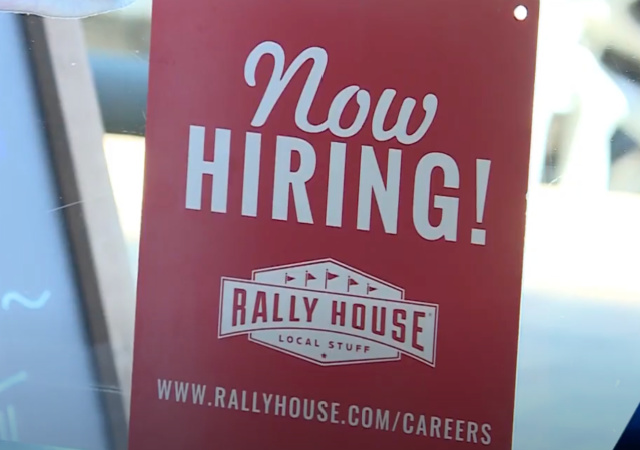 Biden said: “In total, the job creation in the first eight months of my administration is nearly five million jobs. Jobs up, wages up, unemployment down. That’s progress.”

Dude. The September jobs report sucks. Yeah, the unemployment rate went down, but not enough people are coming back to work:

The drop in the jobless rate came as the labor force participation rate edged lower, meaning more people who were sidelined during the coronavirus pandemic have returned to the workforce. A more encompassing number that also includes so-called discouraged workers and those holding part-time jobs for economic reasons declined to 8.5%, also a pandemic-era low.

“This is quite a deflating report,” said Nick Bunker, economic research director at job placement site Indeed. “This year has been one of false dawns for the labor market. Demand for workers is strong and millions of people want to return to work, but employment growth has yet to find its footing.”

Wages increased as a way for companies to entice people to return to the workforce:

Despite the weak jobs total, wages increased sharply. The monthly gain of 0.6% pushed the year-over-year rise to 4.6% as companies use wage increases to combat the persistent labor shortage. The available workforce declined by 183,000 in September and is 3.1 million shy of where it was in February 2020, just before the pandemic was declared.

“Labor shortages are continuing to put severe upward pressure on wages … at a time when the return of low-wage leisure and hospitality workers should be depressing the average,” wrote Andrew Hunter, senior U.S. economist at Capital Economics.

But the higher wages could affect inflation, which could influence the Federal Reserve’s decision on monetary policy.

Companies want to hire. Experts thought jobs would skyrocket because benefits ran out and so many people got the vaccine:

Perhaps the biggest mystery right now is the shrunken labor force. With the expiration of enhanced jobless benefits, rising vaccination rates and higher wages, many economists predicted that workers would return to the labor force this fall. But last month, the labor-force participation rate—or the share of workers with a job or actively looking for one—dipped slightly to 61.6%, down from 63.3% in February 2020 ahead of the pandemic.

“Ramped up production may be necessary, but you can’t find the employees to ramp it up,” said Ann Silver, head of the local Chamber of Commerce in Reno, Nev. “We’re hearing that from every sector—hospitality and touring, healthcare, you name it. People can’t be found. Everybody’s quick to say, ‘Wow, the economy is rebounding.’ Well, it can’t without human beings.”

Companies have learned a few things about running on a smaller labor force and running their newly overpaid employees ragged.

They are still hiring some but not as many because the wage requirements are a huge drag on areas with low cost of living where the salaries to pay for such inflated goods and services just aren’t built in to the middle class livelihood.

It’s almost like something like this has been predicted time after time when the government meddles in minimum wages and corporate tax grabs.

How many jobs gone due to Comrade Biden’s not-a-vaccine vaccine ‘mandate’?

How much does than factor into those numbers?

I’d love to hear they would have made the ‘expected’ number if not for resignations and firings due to the not-a-mandate mandate.

Will they factor that into the next jobs report? If so, what’s their estimate of jobs lost due to not-a-president Biden’s ‘mandate’.

Correction: How much does that factor…

Not just that, but a whole bunch of companies are holding off on filling spots because they currently can’t legally require vaccination for new employees, and they can’t afford to spend the money and weeks or months training new employees that will quit or get fired when OSHA issues their idiocy (if they ever actually plan to do it).

What does “rising vaccination rates” have to do with hiring? That would imply companies are already actively rejecting unvaccinated applicants. If so they have nobody but themselves to blame for not being able to hire enough people.

Amazon is struggling for employees to the point that they are trying to get those of us in RME (reliability, maintenance and engineering) to pitch in and hand sort/stow packages.
Uh, no. I was hired to perform maintenance.

On an unrelated note…..Amazon will probably succumb to government pressure and demand Covid vaccination as a condition of employment, but only after “peak” season which is Oct 25-Dec 31.

I’m not sure if I’ll stick around to fool with Bezos and be a thorn in their side. With the job market wide open and a shortage of technical skills I can waltz off and never look back…..yes, I have things lined up in my favor.

I wish I could post a video of the flooded breakroom with empty vending machines that has the banner in it stating “Insist On The Highest Standards”, or the porta-potty that has been filled to the brim with the worst foulness I’ve ever seen in one, and I worked as an ironworker in the late 1980s, building paper mills.
I’ve had enough of this “woke” BS as well…..Diversity, Equity and Inclusion is only for the “oppressed”.

If you aren’t vaccinated (obviously I don’t know if you are or not) that may no longer be true. Employers aren’t going to hire somebody they’d have to fire as soon as Biden’s new OSHA mandate becomes effective. That of course was the point, to put severe economic pressure on the noncompliant.

What the Joseph Goebbels media tells us now:

What the Joseph Goebbels media told us last year:

Unemployment is the plan. The left wants slaves who depend on the government for survival. You must see this from their perspective. This is not stupidity. This is an evil agenda.

But socialism will work this time! /

The lockdown and other Covid inspired interruptions to jobs, schools and daily life caused a number of people to reevaluate their priorities. Some of them moved to another State, some changed careers, others prioritized their kids education by homeschooling.

This segment of the labor force is unavailable. They didn’t go Gault exactly, but have a conscious decision to make substantial changes in their life. They are unlikely to return to their previous employer.

The result is less available workers. If employers continue to run their workforce ragged them even more will look to leave the rat race and start a small business or stay home and teach their kids or both. Until employers don’t make jobs attractive in terms of compensation and work/life balance it will continue. IMO

I don’t eat hardly any fast food but last weekend after watching a Wendy’s breakfast ad during Brady’s slapping of New England, I thought, “That looks good.”, so I pulled into my local Wendy’s. The place was closed with a sign apologizing that they don’t have enough staff to open. The big sign was offering $25/hr for managers plus $2,500 signing bonus and $14 starting for employees.

Stopped at Boston Market for some dinner on the fly. Drive through only due to staff shortage read the sign on the door. Only two workers inside. I left a $5 tip and thanked them for their service.

Met with the owner of my office cleaning service, a personal friend. He said he can’t keep workers. They are all leaving for fast food jobs paying wages as high as $17/hr. He is bound by contracts with office buildings like ours and can’t raise rates. To get employees, he and other workers shuttle them to buildings in the middle of the night and his wife watches their children. That’s after a full day running his business.

For Biden and the Dems, life is good and unemployment is down. Tell that to these folks.

I’m sure what with Dementia Joe reversing Trump’s policies and closing monuments all across the country to business activities such as mining and lobster fishing his jobs numbers will be a lot better in the 4th quarter of 2021.

How can he miss? Besides, he will then blame it all on the unvaccinated.