Purportedly worried about the WuFlu, but I’m wondering how much the FJB chants figure into this. 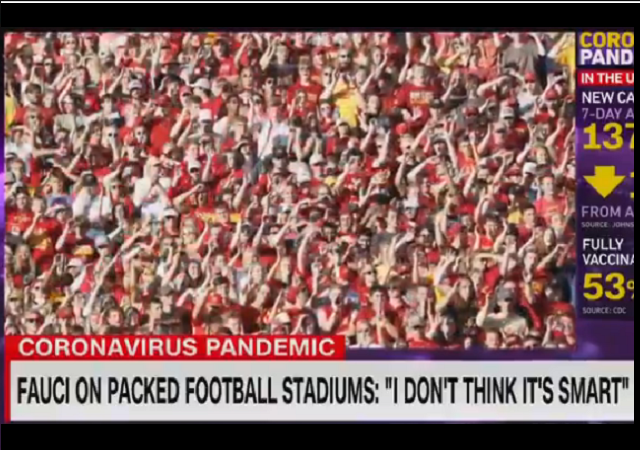 “People are cheering and enthusiastic, exhaling with vigor; if there are people infected, they can infect people around them … Nobody was wearing a mask … I'd be very surprised if we didn’t have outbreaks" pic.twitter.com/kVqW4kn8R9

The totalitarians who insisted that giant crowds of “vigorously exhaling” antifa/BLM rioters, arsonists, vandals, looters, anarchists, racists, and murderers were justified by their righteous cause and who don’t blink an eye when the totalitarians themselves are caught repeatedly violating their own draconian orders are suddenly upset about college football.

CNN pooh-poohed the return of college football, sounding the alarm about large crowds of fans “exhaling with vigor” amid the ongoing coronavirus pandemic.

Images of crowded stadiums delighted football fans over Labor Day weekend but the liberal network frowned upon the return to normalcy.

“I just can’t get over the pictures of those outdoor stadiums,” Cabrera said. “Dr. Schaffner, these events are happening outdoors, are crowds like that safe?”

Dr. William Schaffner, medical director of the National Foundation for Infectious Diseases, responded that he doesn’t use the “four-letter word” safe, but the crowds certainly provide a risk.

“This Delta variant is so readily spread, that even outdoors where people are cheering and enthusiastic, exhaling with vigor, if there are people infected they can infect people around them,” Schaffner said. “I looked at those television images, nobody was wearing a mask at all and I would be very surprised if we didn’t have outbreaks here and there across the country related to these gatherings, these football stadium events, in the coming weeks.”

Another guest then said it was “tough” to see images of fans attending college football games over the holiday weekend.

“It’s like we’re fighting this fight alone as healthcare workers,” a nurse told CNN. “Nobody is wearing masks anymore and its hard feeling like we’re alone in this fight.”

Look, either the vaccines work or they don’t. You can either continue your normal life if vaccinated and not worry if unmasked vigorous exhalers are in football stadiums hundreds of miles away, or you can mask and social distance and hide in your basement after being vaccinated. Up to you.

What you cannot do is argue that the vaccinations are necessary for the entire population because they aren’t effective. This makes less than zero sense, particularly as we learn that medical professionals are discussing ways to inflate WuFlu cases in order to be “more scary to the public” and from the leftist Atlantic that the WuFlu hospitalization and death numbers are (at best) grossly inflated (archive link).

But there are many COVID patients in the hospital with fairly mild symptoms, too, who have been admitted for further observation on account of their comorbidities, or because they reported feeling short of breath. Another portion of the patients in this tally are in the hospital for something unrelated to COVID, and discovered that they were infected only because they were tested upon admission.

. . . . From mid-January through the end of June 2021, however, that number rose to 48 percent. In other words, the study suggests that roughly half of all the hospitalized patients showing up on COVID-data dashboards in 2021 may have been admitted for another reason entirely, or had only a mild presentation of disease.

This increase was even bigger for vaccinated hospital patients, of whom 57 percent had mild or asymptomatic disease. But unvaccinated patients have also been showing up with less severe symptoms, on average, than earlier in the pandemic: The study found that 45 percent of their cases were mild or asymptomatic since January 21.

Biden declaring that the vaccinated have to be protected from the unvaccinated by state-coerced vaccinations is ten levels of crazy . . . unless you include the political motivation to instill in Democrat voters a hatred and fear of the unvaccinated. So much better for them to direct their anger at their fellow citizens than at the guy drooling as he dozes off in the Oval Office muttering about “those F-so-and-so signs.”

Enter CNN to point out exactly who is the real danger to America, to the free world, to the very concept democracy itself! Vigorously exhaling college football fans. Good grief.

Remind me again, how “deadly” is this disease for college aged kids?

The flu is deadlier for college aged kids.

The disapproval from the msm and the elite set is so open that I wonder if we are already on ‘double secret probation’. Vigorously exhaling indeed, all the way to their fainting couch.

I bemoan the vigorous exhaling on CNN sets.

I bemoan the continued inhaling on CNN sets.

The goal is to silence any opposition and promote one point of view.

Literally, everything CNN does is based on their agenda.

If they report anything accurately – it is only because it is so obvious that they literally have no choice.

“Cheering is no longer allowed at sporting events. Only clapping is allowed. This is not about freedom. It’s about saving lives.”

“Restrictions on personal liberty, on the right of free expression of opinion, including freedom of the press; on the rights of assembly and association; and violations of the privacy of postal, telegraphic and telephonic communications and warrants for house searches, orders for confiscations as well as restrictions on property, are… permissible beyond the legal limits otherwise prescribed.”
–That ’40s Fuhrer

Can’t clap its triggering….only snapping now (which is somehow less triggering…although every time I see someone do it I want to smack them across the face blue Batman style)

Wait till CCN finds out what happens in the dorm and hotel rooms after the game!

No masks involved, post-game, unless it’s their kink.

It’s time to call for the vaccinated to be unvaccinated so they too can remove their masks. Someone please remind them that spreading the infections is how we achieve herd immunity.

Looks like the ‘vaccinated’ automatically become unvaccinated in about 3-6 months.

Hell of a ‘vaccine’ they got there.

The left always targets who and what they fear. #FJB scares them.

Our nation is too far gone. There’s no way to live with the “CNN” half – it will never work. Ever.

Looked like there was a lot of ‘vigorous exhaling’, without masks, at Obama’s big 60th birthday bash.

I guess everyone at CNN missed that.

Make believe they are protesting white privilege and everything will be fine.

Obama’s malignant campaign manager says we are “sick and perverted”.

Prepare. They’re coming for us.

Is there any evidence that covid, of any variation, spreads outdoors, or in open indoor spaces like supermarkets?

Good question. I’d like to hear the answer too.

Well, if the stadium would just play a loud “F*ck Joe Biden” on their speakers, then the fans could simply hum along while raising one finger on each hand.

The mumbling you referred to is mildly disturbing. President FJB seems to have forgotten his own name and currently believes he is named Soandso instead. /s

As I understand it, he believes his name is Mr. President because that is how everyone seems to address him.

HAHAHA – “exhaling with vigor” sounds like something badly translated from Japanese. They’re destroying whatever remaining shreds of credibility when they bitch about something like that.