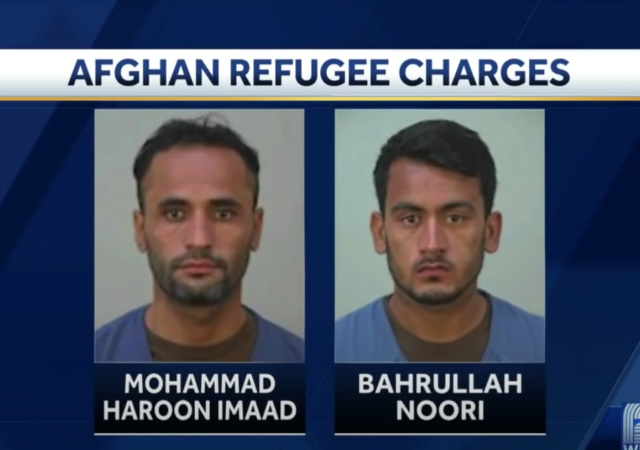 Two Afghan refugees flown to the U.S. during the Afghanistan withdrawal face federal charges for alleged spousal abuse and engaging in sex acts with a child.

Both men are at Fort McCoy in Tomah, WI:

Bahrullah Noori, 20, is charged with three counts of attempting to engage in a sexual act with a minor, while using force in one case. The victims were under the age of 16, according to the U.S. Department of Justice. Mohammad Haroon Imaad, 32, is charged with assaulting his spouse by strangling and suffocating her.

The charges are a result of an investigation by the Federal Bureau of Investigation and Fort McCoy police.

The refugees at Fort McCoy want special immigration status. Nine agencies plan to help the more than 12,000 Afghans at the base.

Earlier this month, the Department of Justice said it started investigations of child brides cases within the Afghan refugees:

CBS News has learned that “several” Afghan women and girls who were evacuated to facilities in the United Arab Emirates have told officials that their families forced them into marriage outside of the Kabul airport so that they could be eligible for evacuation.

A senior State Department official said authorities are taking the claims seriously and investigating. Human trafficking is a federal crime and also illegal in every state. It is not clear how the U.S. would handle the case of an Afghan evacuee found guilty of child trafficking.

The CBS report mentioned Fort McCoy. The sources said leadership at the base heard about potential cases and began investigating.

The take away is: they are not refugees. They are the kind of people refugees are fleeing to get away from. Yet they are here while American citizens were left behind.

They molest, but do they abort, too? It’s all social progress at the Twilight fringe.

These fellows took exactly the wrong message away from “Drag Queen Storytime.”

But, European white males are the problem.

And with trans-aspirations, females, too. Political congruence (“=”) is a double-edged scalpel.

Is The Regime looking for the ‘root cause’?

Can they find a way to blame it on Trump? On ‘white supremacy’? On ‘systemic racism’? On ‘white colonialism’?

There’s nothing American Marxists can’t rationalize as the fault of America. Just read up on 60 years of Soviet Union anti-US propaganda and you’ll find the answer.

Why should the try and ‘rationalize’ anything, (other than for the preening dummies in Hollywood)?

WHERE THE HELL IS GOP CHAIR RONA ROMNEY?

Perhaps they self-identified as Democrat politicians.

Must be more of those sinister White nationalists the media says are lurking under every bed in AmeriKKKa.

Or maybe the media will assure us that this is just beautiful and normal cultural diversity, and that only a racist xenophobic Islamophobe would object.

If you do a google search on this, you won’t find it. Surprise.
https://imgur.com/a/FXqGEnR
For those who don’t want to click through, it’s a screenshot of

“An SIR (serious incident report) on Fort Bliss [which] has identified an attack and sexual assault on a soldier who was reporting to duty. The “guests” denoted in this report are among the Afghan refugee population. While the report doesn’t identify the soldier who was attacked by sex, we’ve been told it was a female.”

And this is how they show appreciation for getting out of that shithole and FREE benefits for life, including running water and a toilet

These people don’t come to the US to be US Americans.
They come to be the same as whatever they are now, just in a nicer neighborhood.
Then they vote to turn it into a carbon copy of the shithole they came from.
Just look at Dearborn, Minneapolis, Roxbury.
They think America is “magic dirt,” where your location guarantees your success.
It was never the location. It was the culture. The culture they reject and destroy.

According to both of my friends that served in Afghan (one 6 years!), this is normal. Rape of children is quite common and normal there. Maybe why the elites here want them here to create the new normal. I was told they even were willing to offer up some of their kids to our service men. Congratulation, we have now imported this great backward culture here.

Off topic: Border Patrol agents involved in “Whipgate” have been suspended.

Make no mistake: the agents will be fired and prosecuted, regardless of the results of the investigation. And the message sent to the rest of the Border Patrol will be clear: if you do your job and enforce the law you will go to jail and have your life destroyed.

A progressive condition, a mob, and emojis. Another Fentanyl… Floyd-Closet?

3-plus years to. go. Withour talk of secession, we’re doomd.

So THESE are the quality of people the pedophlle-in-chief wants to bring in? I guess at least the have the child molesting in common with the demented retard.

The Man Who Would be King

They pay women only 80% of what men make too.

Welcoming the 7th Century to America

Were they interpreters? Why are they here? Did they have an SIV?

If not, why were they allowed to board a plane only there for Americans and Afghans with SIVs? Did they shout “I vote Democrat!” on the tarmac in Afghanistan?

I say we send them back tonight, I could care less if they have a parachute when kicked out of the plane over Kabul.

They should have to pay for the parachute.

I hope this doesn’t damage diversity, which is our strength.
No. Wait. That was after the Ft. Hood shooting.

CBS News has learned that “several” Afghan women and girls who were evacuated to facilities in the United Arab Emirates have told officials that their families forced them into marriage outside of the Kabul airport so that they could be eligible for evacuation.

This is understandable. Their families did the best they could for them. In that situation, marrying some family friend, or even some stranger, was far better than the alternative, no matter what the girl’s age. Many of the Jewish refugees from Yemen who were airlifted to Israel in the early 1950s were child brides, who were married off to save them from a worse fate.

Only Milhouse can find a silver lining in the dark cloud of rape and child sex trafficking.

Just like not too long ago he justified that the Supreme Court was obligated to accept all laws as immutable.