“talks about his childhood, his upbringing, his family, how his education affected his career, working in media, and so much more” 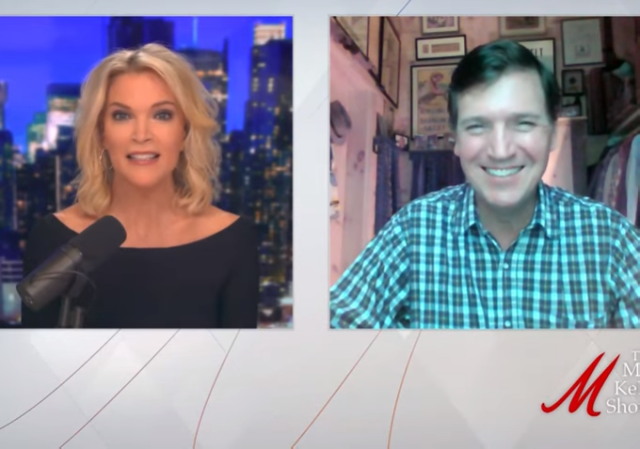 This weekend, Megyn Kelly published an interview with Tucker Carlson on her YouTube channel. It’s receiving a lot of well-deserved attention.

It’s a long discussion and covers a wide range of topics. One of the best things about it is the chemistry between Kelly and Carlson, who genuinely come across as old friends.

In fact, at one point in the interview, Tucker reveals that Megyn Kelly is one of the reasons he even got hired at FOX News. He credits her for standing up for him, and that’s just one example of their frank talk about media and even FOX News.

During the course of the interview, Tucker talks about his childhood, his upbringing, his family, how his education affected his career, working in media, and so much more. They do a lot of dishing about people at other certain cable networks. It’s all surprisingly candid.

Tucker gives a very detailed account of his career in political media, but the interview is also a huge win for Megyn Kelly, who is finding great success on YouTube.

It’s a long interview but totally worth your time. I’ve watched the whole thing and I recommend it.

Since she’s not actually a conservative but just pretends to be one, they’re perfectly OK with it.

I have more respect for Sharyl Attkisson and Lara Logan, who were liberal believers at one time and genuinely seem to have made a conversion.

Megan has done a turn around, which I don’t trust
She thought the Left would welcome her with opened arms…

She’ll never live down her beings such a scummy swamp shill against Trmp during the presidential debates.

Let me add something to that: she never asked for forgiveness for doing it.

I mean she was pretty pathetic, but what really sealed the deal for me was that not only did she never admit she was wrong, even after it became a CLEAR choice between Trump and freaking CLINTON, she continued shamelessly attacking Trump. She never once admitted she was wrong, and was content to play the ‘conservative’ Never Trump shill for far too long until she was finally tossed because nobody on EITHER side was listening to her.

She came crawling back after she was kicked to the curb because for the liberals, the Useful part of the Useful Idiot was at an end.

Like an AWFUL lot of supposed ‘conservative leaders’, the second she thought that she didn’t need the support of actual conservative plebes, her mask came off.

Just like Kristol, Max Boot, Treacher, Rick Wilson, and a whole HOST of others.

I’m not saying that people can’t be wrong.

But she has yet to admit she was wrong about a single thing. So I have absolutely no intention of ever supporting her in any capacity ever again.

She’ll never come across as genuine to me again, with her history. It’s always going to be “Me Again” Kelly for me.

I used to keep cable just for Fox News and Lou Dobbs on Fox Business. Fox showed its new / true colors during and after the color revolution / coup / stolen election of November 3, 2020.

It became inarguable that Fox was nothing but controlled opposition (at best), and so I cut the cord several months ago.

The appropriateness of this decision was cemented just days ago: Bannon’s War Room played a clip of Bret Baier disseminating the lie that the Maricopa County audit “confirmed” that Joe Biden won, fair and square. Zero mention of the deleted electronic files (violation of federal law / spoliation of evidence), nor the massive (and potentially result changing irregularities with duplicate / invalid ballots, and so on.

That folks like Tucker remain on Fox, when they have to know that it is lying to the public, tells me that in the end they have no integrity (contrast with Lou Dobbs who probably refused to buckle).

Tucker too, is controlled opposition. Otherwise, he should have taken over for Rush. He was the obvious choice to replace him.

While there are some things to like about Clay Travis, he is really more an ex-liberal than a dyed-in-the-wool conservative as Rush was.

In one sense, there’s nothing wrong with that — Reagan and Trump were also Democrats at one time, and left when the party left them. But Clay is not a born true believer.