Sweden Will End Most Remaining COVID Restrictions this Month

Sweden Will End Most Remaining COVID Restrictions this Month

Sweden: A bastion of science in a world of voodoo epidemiology. 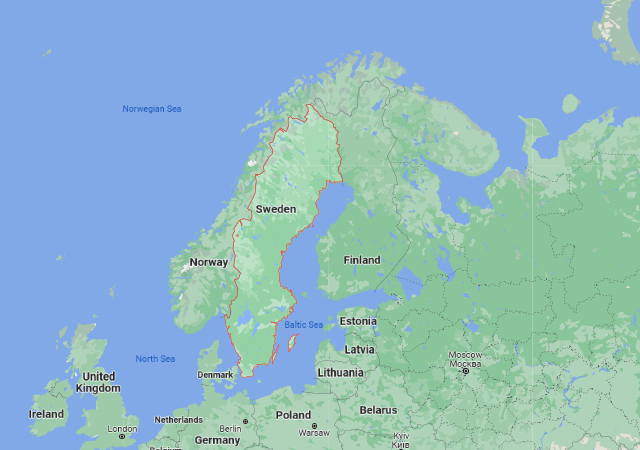 In a rare sign of sanity among the world’s public health officials and governments, Sweden will ease COVID-19 restrictions at the end of September.

The nation will remove most curbs and limits on public venues such as restaurants, theatres, and stadiums.

With most adults vaccinated, Sweden has gradually eased some restrictions during a summer lull in the pandemic. While it has seen infections mount in recent weeks amid the rapid spread of the more contagious Delta variant, deaths from the disease have remained low.

Sweden has been an outlier in aspects of its handling of the disease, shunning hard lockdowns throughout the pandemic and relying heavily on voluntary recommendations regarding issues such as social distancing and hygiene.

However, public gatherings such as concerts, sporting events and venues such as bars and restaurants have operated under tight crowd limits, curbs that are now set to be removed on Sept. 29, along with a recommendation to work from home.

The national guidance to work from home (if possible) will also be removed, but the Public Health Agency advises Swedish employers to implement a return to physical workplaces “gradually.”

These changes will come into effect from September 29th onwards, and are in line with what was planned for September in step four of the government’s five-step plan for easing pandemic restrictions.

“The announcements we are making today mean that vaccinated people can in principle live as normal after September 29th. For the unvaccinated, they continue to be at risk of suffering serious illness, and this will be a concern when day-to-day life returns to a more normal situation,” warned Public Health Agency General Director Johan Carlson.

Sweden has been slammed repeatedly by our panic-stricken mob of elitist leaders in politics, academia, and journalism for refusing to impose lockdowns or mask mandates. Instead, they essentially followed the recommendations of the Great Barrington Declaration and focused on protecting the vulnerable (the old and sick) while allowing everyone else (the young and healthy) to live normal lives. (This approach is what western civilization had done for the last two centuries when faced with a new flu epidemic, and only abandoned it in 2020 when our new leftist masters decided they knew better.)

The result was that the COVID virus quickly spread through Sweden’s strong and healthy population, did little harm, but left behind a nation of people who all have a natural immunity to the Wuhan flu and its later strains. Thus, while the rest of Europe — home of totalitarian and mindless governmental restrictions, lockdowns, mask and vaccine mandates — is now dealing with new outbreaks of the Wuhan flu and new deaths, Sweden is not.

Zimmerman reviewed the weekly data from the European Centre for Disease Prevention and Control for the week of August 27th. I did the same for this week, and the results highlight Sweden’s astonishing success. 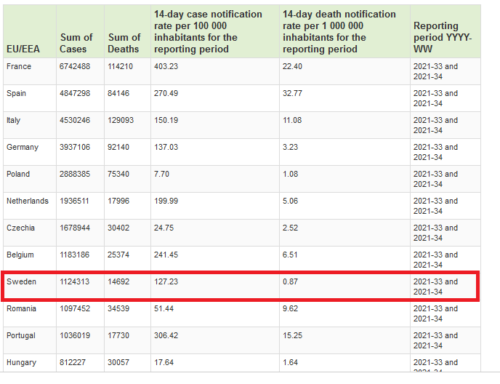 The list of restrictions for people traveling from the United States to Europe is growing as European Union members implement new rules amid the COVID-19 pandemic.

EU countries including Spain, Denmark, Italy and Norway are tightening restrictions for tourists traveling from the U.S. in the wake of the European Union’s removal of the country from its safe travel list and as COVID cases continue to rise stateside.

The EU’s August move signaled to member states that they should no longer ease restrictions on nonessential travel for people from the U.S. amid the latest surge in COVID-19 cases. The U.S. was added initially to the EU’s safe travel list in June.

The restrictions include vaccine mandates and a complete prohibition on non-essential travel, depending on the country.

And while Sweden is restricting Americans from entry, it is a bastion of science in a world of voodoo epidemiology.

While DIctator Dementia cracks down.

I’m trying to see which vaccine Sweden used from the outset?

Sweden’s cumulative Infection Rate and cumulative deaths are substantially lower than most every european and north american country, with the exception of Canada, norway, finland, denmark and the baltic countries. The short term pain resulted in much lower overall pain.

Yes, individual and community immunity through infection and cross-reactivity mitigated disease progression and excess deaths. The absolute risk of vaccines (without established safety profiles) were a poor choice for the general population who were at low risk of infection, disease, and abortion. Then there was a scientifically and physically well-considered abstention from pass restrictive mandates that conveyed false sense of safety (but viable legal indemnity), including masks that offer limited utility to control symptomatic droplet transmission when following strict protocol in time and space.

Which one is the real one? Herd immunity?

Ok looking at one weeks data and then making a claim isn’t analysis. Far from it.

Maybe look at the overall death figures combined with hospitalisations. Compare like for like countries and you’ll see that Sweden’s policies have resulted in far more deaths than neighbouring countries. It’s also managed to vaccinate it’s population unlike the US because it doesn’t have the same issue with the anti vax idiots

Not so fast. Sweden might survive Covid tyranny, but their paradise will be destroyed by the Trojan Horse full of Islamists they so stupidly wheeled into their country.

Meanwhile, the US is tightening restrictions. And the regime is annoyed the Constitution prevents them from following the Australian ‘New World Order’ model.

We no longer live in a free country. What freedoms we have left diminish with each passing day. Where the regime cannot Constitutionally remove a right its allies in Big Tech and Big Business step in. Half the country is cheering the rush to ‘fundamentally transform’ America into a radical leftwing fascist state.

Who would have thought a Scandinavian nation would become a beacon of rationality as the lights of freedom go out in formerly free nations rapidly succumbing to the darkness of irrationality and totalitarianism?

Secession is our only way out. Even just a serious threat of it would wake enough people up.

I have read, but can find no real authoritative source, that Sweden also encourages using D supplements and pays for blood level tests. This, if true, might be an important underlying factor.

A consensus between the physical, scientific, and political is that natural immunity is more robust and durable than vaccinated immunity, and general population mandates do not mitigate transmission, infection, and disease progression.

What evidence is there that “most adults vaccinated” is the cause of the current infection and death rates? Everybody is assuming correlation = causation.