“The policy changes of this proposal far outweigh the budgetary impact scored to it and it is not appropriate for inclusion in reconciliation.” 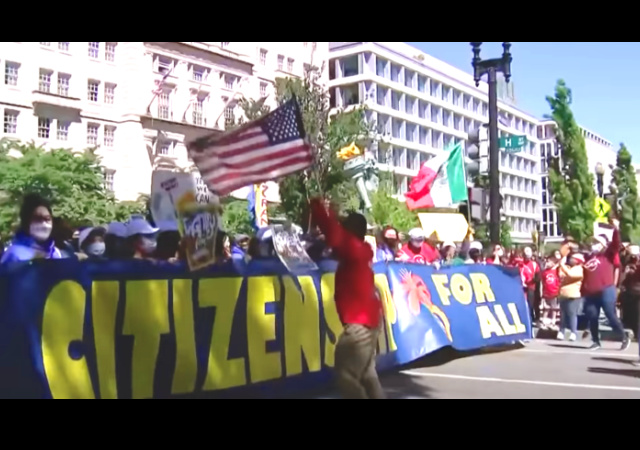 The Hill reported that Senate parliamentarian Elizabeth MacDonough ruled the Democrats plan to give out 8 million green cards in the spending package does not meet the rules for what they can put in the bill.

MacDonough’s guidance, a copy of which was obtained by The Hill, likely closes the door to Democrats using the spending bill to provide a pathway to citizenship for millions of immigrants.

MacDonough, in her guidance, called the Democratic plan “by any standard a broad, new immigration policy.”

“The policy changes of this proposal far outweigh the budgetary impact scored to it and it is not appropriate for inclusion in reconciliation,” she wrote in the ruling obtained by The Hill.

Democrats pitched MacDonough earlier this month on their plan to use the $3.5 trillion spending bill to provide 8 million greencards for four groups of immigrants: Dreamers, temporary protected status (TPS) holders, agricultural workers and essential workers. Getting legal permanent resident status allows an individual to eventually apply for citizenship, if they can meet other qualifications.

The Democrats want to use reconciliation to pass the bill without Republicans. They must abide by certain requirements, including “any provision in the bill has to impact the federal government’s spending or revenues and that the impact can’t be ‘merely incidental’ to non-budgetary intentions.”

The Democrats have tried to slip other changes past MacDonough without any success.

MacDonough decided the Byrd Rule applied, which “allows senators to block provisions of reconciliation bills that are ‘extraneous’ to reconciliation’s basic purpose of implementing budget changes.”

With high unemployment and an end to unemployment payments, we have someone shipping hundreds of thousands of low-skilled people to our border.

With a truly horrifying pandemic, we have infected people being allowed in by our Federal government, and shipped all over our country.

With a truly horrifying pandemic, we have the CDC and FDA ignoring the very real fact that our children are, as a class, immune to it.

With many decades of real evidence that masks do not work, we have State officials and Federal officials touting masks as a means of preventing the spread of a respiratory virus, even among children, who are immune to it.

With a truly horrifying pandemic, we have hospitals and State governments refusing to use cheap drug therapies, although Pfizer is busy coming up with an analog to one of them, that will be patentable.

With a group of safe and effective vaccines, we have the example of Israel with either breakthrough infections or ADE worse than when Israel was vaccine naiive,

With a pandemic of the unvaccinated in San Diego, we have next door Los Angels showing 25% of the new COVID cases are either breakthrough or ADE. ADE is gettin no mention in the local pandemic reporting.

Something is wrong with this picture.

They control the horizontal.
They control the vertical.
They can twist the budget, make it flutter.
They can change justice to a dark smudge, or crystallize it to lethal sharpness.
For the next three years, sit quietly and we will control all that you see and hear.
We repeat: There is nothing wrong with your country.
You are about to participate in a great reset.

Oh, that’s good news because Hillary has a reset button! Well it was supposed to say “reset” but she screwed up and what it really says is “overload” which decribes the situation perfectly. We are so overloaded with illegals to the point we need a reset. Seven flights a day may be enough to deport illegal Hatians but illegal Mexicans would take seven container ships a day for 700 years.

ALLOWING NON_CITIZENS TO VOTE IN ELECTIONS

Democrat-controlled New York City Council is considering a proposal to allow non-citizens to vote in local elections. Apparently, they claim, the U.S. Constitution limits votes to citizens but only applies to federal elections.

This is dangerous and undermines the rights of actual citizens.

This shows clear that the Democrats really hate this country and the citizens that happen to occupy it. If they had their way they would exterminate us all or move us all into camps.

— Um, I wonder who they are acting like ? Yep, I think there is a historical reference point.

2. There are already cites in the USA that don’t require citizenship to vote. And the same is true in many other countries.

Eight million is a drop in the bucket compared to those already here.
That is the prize they are after.

There is a good faith argument to be made for amnesty that doesn’t lead to citizenship but instead a separate category of lawful permanent residence which is unable to be upgraded to a normal green card or citizenship.

That ain’t the argument the d/progressive are making. They want the whole enchilada of immediate and nearly unlimited amnesty plus citizenship which most people quite correctly oppose. IMO an amnesty leading to only residence but never citizenship could be brokered as a compromise. Though I doubt the d/progressive would agree with my reasonable outline. No criminal conviction and solid employment history.

Of course the application would require a list of employment and residence. Those employers would be fined where applicable under State or Federal law. They would also be open to civil suit by any competitors where their use of lower paid illegal immigrants allowed them to gain an unfair advantage, undercutting bids and price quotes.

The major employers of illegal immigrants are unlikely to accept these provisions nor would open border advocates. Especially when coupled with a border wall as a prerequisite along with rigorous interior enforcement to locate and deport those not eligible.

The 1986 Amnesty must never be repeated where border security and enforcement provisions come after the amnesty. That’s simply a surrender.

The parents who smuggle their children here can’t be rewarded with residency. The Supreme Court, probably correctly, won’t let us have grades of citizenship beyond those in the Constitution. Therefore, the Dreamers cannot be allowed to become citizens. Even if we did away with family reunification entirely, it would eventually come back.

There wouldn’t be different classes of citizens. There would be a separate category of lawful residence. That’s a huge distinction and is absolutely constitutional. We have multiple categories of folks lawfully present in the US who are not Citizens.

Family reunification could be addressed very simply. Limited to minor children. Anyone who previously chose to abandon mom, dad, aunts, uncles, cousins and grandparents, leaving them behind in their home country to come to the US illegally can live with the consequences.

“an amnesty leading to only residence but never citizenship could be brokered as a compromise.”
Works great for exactly one generation, then their kids that are born here are citizens, and you’ve achieved nothing.

Henry, everyone born here is already a Citizen so I don’t understand your point. If we could actually get a wall, stepped up vigorous interior enforcement v individuals illegally present, their employers and their enablers (Catholic Church, La Raza, others looking at you) in exchange for a legal status that:
1. Doesn’t lead to citizenship; rewarding bad behavior with the ultimate prize
2. Removes the BS narrative, sad images of dreamers and ‘hard working, otherwise law abiding’ folks who just wanted a better shot at life like every other person in our ‘nation of immigrants’

That’s a deal I can live with.

The Senate majority leader has the authority to hire and fire a parliamentarian.

She is the first female to hold the position.