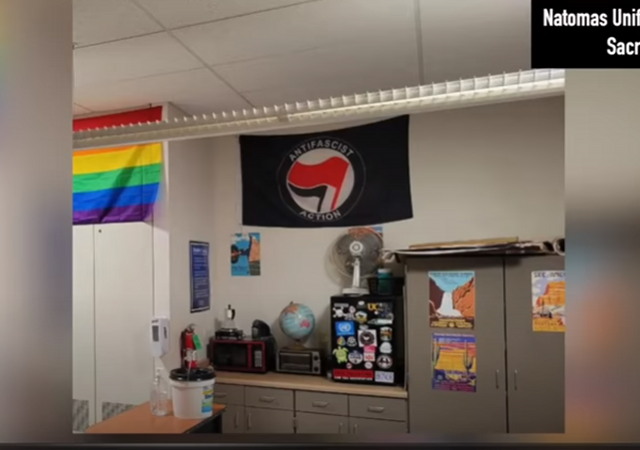 This description of an exchange between Gipe and a student is alarming:

Later, when a reporter from Project Veritas confronted the teacher on the street, he was wearing a t-shirt with a hammer and sickle on the front. You couldn’t make this up:

FOX News reached out to the school district and received this statement:

“We understand that parents and Natomas community members have expressed their concern about the contents of this video,” the statement read, in part. “We respect and recognize their expressions of concern. Natomas Unified, as always, will look into this matter and take any appropriate actions as necessary. District policy explicitly states, ‘Whenever civic education includes topics that may be controversial due to political beliefs or other influences, instruction shall be presented in a balanced manner that does not promote any particular viewpoint.’ That is always the expectation.”

“Sadly, a number of emails have come in from outside our community that express hate and threats,” the statement added. “There is sad irony in that outsiders are expressing displeasure towards the individual teacher while also using intense vulgarity, hate speech and threats of violence.”

Antifa members are upset that this teacher allowed himself, and them, to be exposed:

Some of the #antifa accounts are furious @NatomasUSD teacher Gabriel Gipe accidentally exposed what they're up to. They also say he was too overt in introducing students to far-left extremism. He should have been more subtle to avoid detection in the classroom, they say. pic.twitter.com/1bZV9puNYV

Incredibly, this person operated right under the nose of school administrators and parents. Taxpayers are funding his efforts.

TY Mike… Fox had a segment on this, and (IIRCC) an ex student tried to alert the school system. No one cared at that time. So they knew,, absolutely, which makes the whole thing worse. I saw it on Fox and Friends, just this morning.

He’s being groomed for a position in the White House.

If he gets good test scores he could probably do whatever he wanted as long as it wasn’t public. The admin positively knows who and what he is and they have likely known for a long time.

There were times when people like him were invited to necktie parties.

Veritas is doing some really great work. That teacher should be fired, along with the school principal and superintendent.

Too bad JFK allowed public sector unions. There was a time bad teachers could be fired.

Time to break the union, anyone who promotes CRT, or anything like it, needs to pay a price for their conduct. People need to turnout for low turnout school bids for more money, and vote hell no.

Playing “Rage Against The Machine” in the car while commuting to your sissy-ass little job doesn’t make you a radical, Gabe. You need to lose that name as well.

Maybe a movie is being made about him: What’s Eating Gabriel Gipe.

Parents are finally starting to wake up to this — Stop f*cking with our kids !

Another example of the need to transfer the tax dollars for public education to the students. Public funding of education is a laudable good. Restriction of the funding to public schools is not. Let the parents find the educational experience that best fits their child and fund that.

One bug I see in that idea is: with the money being funneled through “the authorities”, there’d likely be more strings attached than in a guitar factory.

1) funds may only be used in schools hiring union teachers.

2) Certain mandatory courses including some of the latest nonsense about “gender fluidity”, CRT, and Black History Year.

3) Matriculation tests written in a manner to test political loyalties.

Do I have a solution? No, not off hand.

That’s the point here. Money flow is all funding sources to the State school board who distributes to parents. Local public schools can compete and win or wither and die.

The folks who have been running the public schools into the ground should asked, then told, then made to halt any shenanigans for funding. Once they have been asked politely then told firmly to conform these folks have no complaints about being made; forced.

People who refuse to think and act logically or reject reason are unreasonable. They have placed themselves beyond being dealt with by the use of reason. Another name for people who reject reason is insane. We shouldn’t waste time arguing with the insane.

This is extreme, but this far-left indoctrination has been occurring in my children’s course material during their entire K-12 education.

Here are some past examples, of the indoctrination that I’ve encountered in my daughters’ schools. I finally took them out of these schools and enrolled them in a charter school:

In my youngest child’s 6th grade class, 100% of the books they read focused on people with disabilities or about people of color. They learned no grammar, vocabulary, diction, usage, etc. . In her math class, the instructor spent 20 minutes daily, telling the students that everyone should be a “caring servant” and help the homeless. He also told them that rich people should be forced to give to their money to the poor. She got straight As, but she could not write a sentence, because she has never learned grammar, diction, usage, etc. in school. I asked the teacher when she will learn grammar. The teacher said not likely, .. it’s not really taught anymore.

In my oldest daughter’s 8th grade history class, she was taught communism is the economic system that is most fair and equal. Each student is required to present the case for their candidate (during the Trump/Clinton election). She was the only one who choose Trump. The instructor never interrupted the others, but argued and shouted down my daughter on every point she made about him. When she asked him afterwards why he did that, he said it was necessary to show the differences between the candidates. It left her shaken, so I wrote the Principal. No response. In my youngest daughter’s home class, the teacher regularly led the class in boo’ing Trump while cheering Clinton. This teacher spent her whole day instructing the students in socialism. The schools are no longer biased, they are communist indoctrination centers.

My kids school in NYC.

. . . >English teacher spent a week last year talking about “white privilege” shamed my kid in class when the kid disagreed.

Did you raise hell, and more importantly, get your child out of the school? Are you working to stop the school from increasing taxes?

Yes, No and Yes.
> The “no” is due to mother wanting to avoid disruption.

I hate to sound like a hammer looking for a nail, but a common complaint from our HS english teachers is that so much time is spent on “analysis” of literature, than the fundamentals are completely ignored. The fundamentals aren’t taught in the lower grades at all for most subjects. The reason for that is grammar, diction, syntax, etc aren’t on the end of year tests that make up a school performance score, but the insane analysis stuff is.

We need parents to understand that the SPS is an almost meaningless metric that is heavily and dishonestly manipulated to trick parents into thinking schools are doing better than they are. Because standardized test scores play a heavy role in that, teachers get A LOT of weight put on us to teach to a remarkably flawed test. That is what it really sounds like was happening in that class for your kid.

That history teacher should be fired.

Saw this a long time ago, which is why we chose to homeschool our kids when we got married 21 years ago.

It looks like he has an INGSOC tattoo on his arm.

Hah! A woke state celebrated under the Rainbow banner of inclusive exclusion (political congruence or “=”). Someone forgot to update their flag to match the diversity (i.e. [skin] colors) of humanity.

2 weeks to the recall.

I’m not really worried about this idiot poisoning the minds of young people because high school kids rarely listen to their teachers. OTOH this joker shouldn’t be on the public payroll.

I don’t know what kind of high school kids you know, but this is among the worst possible takes I’ve seen. Of course kids are listening to and internalizing this garbage. Why do you think they are targetting our nation’s K-12 kids? Because they will just be ignored or, oh, I don’t know, because it’s freaking effective as hell? Why would you dismiss this as an actual fact in light of all evidence to the contrary? I’m not sure if you are a culturally- and socially-inept idiot or a koolaid-slurping commiebot, but this is one bad take.

I think preaching to a captive audience about his political beliefs gratifies certain psychological needs Mr. Gipe has. I don’t think he’s really trying to change anybody’s mind, if he was he’d be a lot subtler. Any expert on human psychology will tell you that persuasion is incremental and you don’t win people over by making them feel uncomfortable. Mormon friends of mine who have done missionary work overseas tell me that the way they convert people is to do good deeds in poor communities and offer their religious beliefs as an explanation for the good deeds.. Telling strangers about fire & brimstone just gets you ignored or maybe punched in the face.

Not sure what’s up with kids these days.

My classmates would have already set his car on fire.

Sugar in the gas tank. He’ll get the message real fast.

“Incredibly, this person operated right under the nose of school administrators”

They know. They approve.

They are and we keep letting them. Leftism/ Marxism is being taught in just about every public school.

We need a new McCarthy to destroy Marxists.

Please don’t tell me the school didn’t know about this guy. Gipe admitted there are several teachers with the same “curriculum”. The school probably loved it. Wonder how many other schools doing this that we don’t know about. Parents, don’t you ask you kids what they learn in school? Mine did–everyday! Of course, that was over a hundred years ago, when teachers really gave a damn about teaching, and one didn’t lose their homes over these G damn property taxes.

I believe that I read earlier that the teacher has been suspended and is going to fired. Though we will see once the union gets involved.