The strain has been linked to “increased transmissibility,” but has not yet been designated as a “Variant of Concern” or a “Variant of Interest.”

I have noted that SARS-Cov-2, the virus that causes COVID-19, will likely crash in waves throughout the globe until population immunity builds to the point it will join the many other viruses that cause colds or other mild respiratory illnesses.

The recent delta variant surge has been deemed the fourth wave. According to a chart prepared by the Centers for Disease Control and Prevention (CDC), it appears the fourth wave may be receding. 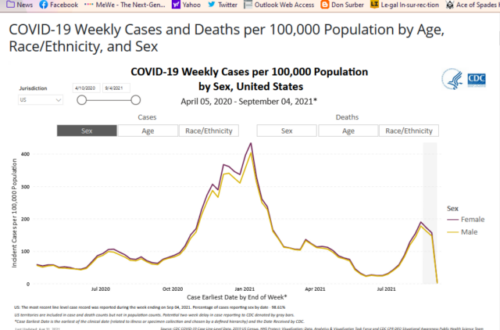 And before the delta wave peters out to a small ripple, the media found another variant to feature: The South African variant.

A COVID-19 variant first detected in South Africa could be more infectious than other mutations — and may have the potential of being resistant to vaccines, according to a report.

The C.1.2 strain has been linked to “increased transmissibility” and is said to have mutated the most from the original virus, which first emerged in the Chinese city of Wuhan, the Mirror reported.

The strain has a mutation rate of about 41.8 mutations per year, almost double the global mutation rate seen in any other existing variant of concern, according to experts at South Africa’s National Institute for Communicable Diseases and the KwaZulu-Natal Research Innovation and Sequencing Platform.

The number of C.1.2 genomes in South Africa has risen from 0.2 percent in May to 1.6 percent in June and 2 percent in July, according to scientists, who also have found 14 mutations in nearly 50 percent of the variants that had a C.1.2 sequence.

The mutations are in the spike protein that makes it adhere to the human respiratory system.

The scientists stressed that the combination of these mutations, as well as changes in other parts of the virus, likely help the virus evade antibodies and immune responses, including in patients who have already been infected with the Alpha or Beta variants.

A Variant of Concern is one for which there is evidence of an increase in transmissibility, more severe disease outcomes, reduced effectiveness of treatments or vaccines, or higher probability of diagnostic detection failures. The current Variants of Concern are Alpha, Beta, Gamma, and Delta. Alpha and Delta are the dominant variants in much of the world. Beta and Gamma are more localized.

A Variant of Interest is one with specific genetic markers that have been associated with changes to receptor binding, reduced efficacy of natural recovery or recovery with treatments, potential diagnostic challenges, or a potential for increased transmissibility or disease severity. They now include Eta, Iota, and Kappa.

The new variant has been reported in South Africa and seven other countries in Asia, Africa, and the Pacific. Scientists are monitoring what is happening in South Africa to see if classification as a VOC or VOI is appropriate.

Having more mutations does not necessarily equal more danger — some mutations can weaken a virus and it’s the combination of changes that affects whether a virus becomes more efficient. One extra mutation could cancel out the effects of another.

But the team — which includes virologist Penny Moore of South Africa’s National Institute for Communicable Diseases — say they are keeping an eye on it.

“We are currently assessing the impact of this variant on antibody neutralization following SARS-CoV-2 infection or vaccination against SARS-CoV-2 in South Africa,” they wrote in a report posted online as a preprint.

yawn… i bored with panic pron. isn’t there anything else on?

otherwise ima just go outside and enjoy the day. they’ve cried wolf so many times no, their credibility is in the negative,

Was their credibility ever in the positive? (Every time I see your user name, I’m reminded of my old Tacoma Chief C1 – which like a maroon I sold.)

I’m either gonna die or I’m not, and it’s way past obvious there’s not a single thing some jackass in Washington is going to suggest or demand that I do that’s going to make a yellow hole in the snow’s worth of difference in the desired direction.

Are they going to call this one the Apartheid Variant? Calling it the South African Variant would clearly be racist and incite violence toward Africans. Isn’t that the garbage they were trying to pass about the China Virus? (/sarc)

Ohhh nooooooooeeeesss! The MUTATION RATE is high! The CASES are high!!

Check out the data from the Texas CARES study… the largest study to-date on covid antibodies: https://sph.uth.edu/projects/texascares/dashboard

Extrapolate the data across the US population and we see that there have been more than double the reported cases. Which means the mortality rate of this disease is less than half what they’re reporting. Which means that it’s as deadly as an average seasonal flu.

This is all a sick joke, a total power-grab. Time to tell the ‘elites’ to go fuck themselves.

These are not mutations nor are they variants: these iterations of “the virus that cannot be isolated” are “scariants”. As I noted in a comment to the Aussie article yesterday of “off again (then)” restrictions: “… South African scientists with help from the UK have used PCR (had to discard all replications that did not look at least 80% like what they were searching for) to create “hyper infectious” C.1.2., Greek letter to follow …” … It is all self validation; there’s no “science” behind this nonsense. … But, it is incredibly dangerous to our country, the world’s stability and humanity this fraudulent psych-ops exercise and now component euthanization phase (18 – 36 months is what I’ve read; vs 24hr news cycle) through the “vaccines (which aren’t vaccines)” we are being subject to.

That is some funny shit, thumbs up

It is not my creation; but it captures the reality. Same as “the current occupant of the white house”. … The more that use the same malapropism; the more poignantly we will collectively express dissatisfaction (and hopefully avoid violence). … “demonrat” is another. … I am open to suggestions.

Just wait until the double-secret variant of the Delta Tau Chi shows up!

The South African variant will be used to justify election chicanery in 2022 by the Rat party. I thought it would be Lambda, but that came from South America. Kinda hard to say it’s super dangerous while illegally importing millions of potential carriers.

I suppose I’d be considered a real nutter to suspect these “variants” aren’t natural mutations, but additional “accidental” lab leaks?

I don’t know if they are, coronaviruses do a good job if mutating naturally.

But I do know that if I were the Chinese Communists i would be looking at releasing new variants from time to time. And I’m not exactly Sun Tzu level super genius.

“Cry havoc and let slip the dogs of war”

Unfortunately, Biden left the dogs of war behind in Afghanistan

The best argument is that there’s really no reason for anyone to make the effort, as it will do that all by itself.

The vaccine was never going to work, these viruses change too rapidly. Thankfully they normally become less deadly, although not always, with every mutation.

Well I think we should call it the Xiden Virus for all those super spreading Vax people.

You mean the super scary variant from the bat cave in wuhan where the bats pass the virus while hanging upside down?

September 01, 2021
Claim: Intelligence Knew Who the Kabul Suicide Bomber Was, And Even Had a Drone Lock On Him for a Targeted Killing, But the Biden Administration Refused to Take the Shot
—Ace

Sounds kinda like when Dollar Bill had Bin Laden in his sights, but was too busy making stains on blue dresses to tend to his (real) business.

And the next time the Biden Gang That Couldn’t Shoot Straight did take a shot at a suspected terrorist bomber it instead killed eight people in an innocent family, including four kids under the age of three.

Meanwhile things in naturally immune Sweden are just about back to normal. Never locked down. Never had mask mandates. Never any authoritarian dictates about how many people are allowed to gather where and when. No vaccination passports. No vaccination mandates. Most schools never closed. Kids don’t wear masks in school.

Sweden treated its population like free adults capable of assessing the risks and balancing the costs themselves. Sweden deliberately chose the herd immunity strategy. Mission accomplished.

Meanwhile in the formerly free and now authoritarian state known as America, that locked down hard for quite awhile, there are still mask mandates, vaccine mandates, vaccine passports, kids going to school with masks on, etc., etc.

With the Delta variant on the wane the South African variant is arriving just in time to keep America under the thumb of the Covid authoritarian totalitarians. And what was formerly called a vaccine is in reality turning into a lifetime of required mRNA therapeutic shots. Once you start you must keep getting jabbed. Maybe as often a twice a year. For the rest of your life. Because, it seems, each jab makes you more vulnerable to the next variant.

Big Pharma is set to make a financial killing off Americans. Bet they just love Comrade Joe and the Dems.

Oh look, covid dropping like a stone without a booster in sight. The “dangerous” delta variant isn’t killing anybody. They’ll still push the vaccines and boosters relentlessly.

Just wait for the Bravo-Sierra Variant.

Seems like this particular quote has been used in virtually every news story about and y new variant, almost as if they just cuat and paste LOL

“A COVID-19 variant first detected in XXXX could be more infectious than other mutations — and may have the potential of being resistant to vaccines, according to a report.”

In other news, every flake of snow comes in a new unique variant.

Don’t worry folks, and I say this as a vaccinated person, there will be no end to the super duper scary variants. The assholes who currently believe themselves to be in charge will never run out of them.

The pandemic will end when we end the people profiting from the pandemic. Not until then.

The overpopulated world is a petri dish. Beyond this pandemic and the politics of it, easy 1 day travel isn’t in the long term interest of the whole.

“I have noted that SARS-Cov-2, the virus that causes COVID-19, will likely crash in waves throughout the globe until population immunity builds to the point it will join the many other viruses that cause colds or other mild respiratory illnesses.”

Immunity is not the key here, mutations are. Viruses tend to mutate in two directions, usually at once, because both trends increase a virus’s success at replication. The trends are for greater infectiousness and less lethality. The virus that infects more people and doesn’t kill them has an advantage over related viruses that aren’t as good at infecting people and kill too many of their hosts (killing them too quickly is particularly bad form because it limits the amount of time the host is of value – so its best not to kill the host at all, allowing the most loiter time before the host’s immune system overcomes the virus).

Immunity is not the key because, ultimately, viruses also evolve to evade immunity, so it’s unlikely we’ll ever be rid of SARS-CoV-2, or some descendant of it. But it will learn to live with us, not the other way around. This is why the common cold and influenza viruses are still with us, they adapt and survive.