“Others, like good little gestapo, fled the class as quickly as they could to report me to my superiors.” 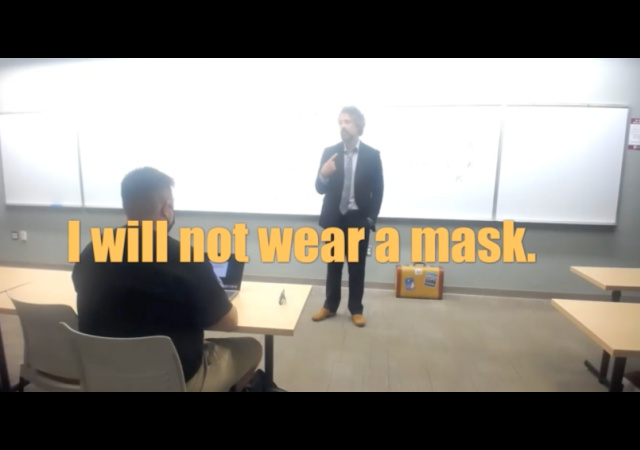 Clements released a letter on September 13 hinting he might take the legal route against the school.

Business law Professor David Clements (right) said on August 23 he had been placed on administrative leave after he made comments in one of his classes and posted a video of himself saying he refused to be a “guinea pig.” The public university requires all faculty to get vaccinated or submit to weekly testing. Everyone must wear a mask, too.

The suspension with pay came just a few days after he had won an award from the business school for teaching excellence. He said in the video he did not attend the ceremony because it required him to wear a mask.

“I will not wear a mask,” Clements said in the video, posted on his Rumble video channel. “I will not take an experimental drug, it will not happen.”

“I will not be a lab rat,” he said, explaining why he also refused the mandatory testing. He told students they were welcome to wear masks in his class. He also said he would make the class available online if students felt uncomfortable. Several students can be heard leaving the classroom during Clements’ lecture.

On his Telegram channel, “The Professor’s Record,” Clements wrote that he “expects the media and Marxist faculty to continue to distort the truth and create the perception that I am a no-good deplorable.”

He added that he had been provided with a ‘notice of emergency suspension pending outcome of further review” by the university.

“Under the suspension, effective immediately, I am ‘prohibited from entering onto any NMSU property, due to a risk of imminent harm to students, faculty, and staff of NMSU, based on reports of persistent and repeated acts and omissions,” Clements said.

He said he is also barred “from attempting to hold any class meeting or contacting any current NMSU student, including teaching any course whether on campus or online.”

Clements posted this video on Rumble: “Class began August 18, 2021. Welcome to my class. Approximately forty students gathered in their masks upon order of the governor and my university. During the lecture, many students unmasked and breathed the air, but many others were paralyzed with fear. Others, like good little gestapo, fled the class as quickly as they could to report me to my superiors.”

OK, I understand he doesn’t want the Vax, and he is refusing to wear a mask. But – Why is he refusing to be tested? It is hard to get behind someone who takes such a hardliners stance and refers to his students as “Gestapo”.