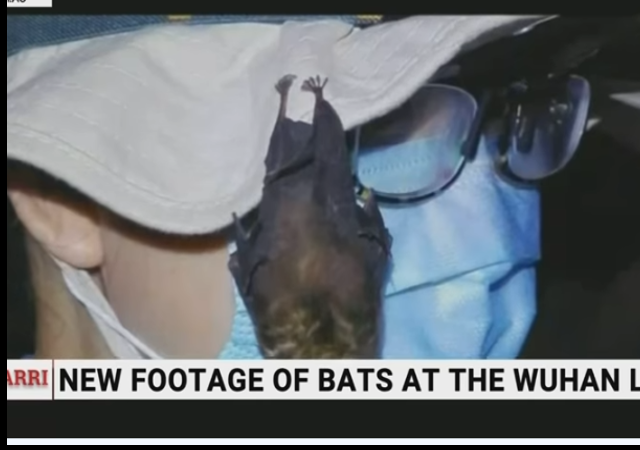 Several significant news items have broken recently, which should drive a stake in the heart of any notion that a naturally evolved virus causes COVID-19.

A new paper released on the Lancet runs counter to the one that was published insisting that the coronavirus (SARS-CoV-2) did not originate in a laboratory. The media used that letter to smear anyone questioning a lab source as a conspiracy nutcase.

The letter, entitled “An appeal for an objective, open, and transparent scientific debate about the origin of SARS-CoV-2,” includes Rutgers’ Dr. Richard H. Ebright as an author, who we have cited before as “lab-origin questioning.”

Overwhelming evidence for either a zoonotic or research-related origin is lacking: the jury is still out. On the basis of the current scientific literature, complemented by our own analyses of coronavirus genomes and proteins, we hold that there is currently no compelling evidence to choose between a natural origin (ie, a virus that has evolved and been transmitted to humans solely via contact with wild or farmed animals) and a research-related origin (which might have occurred at sampling sites, during transportation or within the laboratory, and might have involved natural, selected, or engineered viruses).

Next, we have noted in the COVID Pandemic Timeline that the first “super-spreader” event was most probably the World Military Games that were held in Wuhan during the autumn of 2019. Now, ex-Chinese Communist Party insider Wei Jingsheng claims China deliberately spread the virus at the event.

‘I thought the Chinese government would take this opportunity to spread the virus during the Military Games, as many foreigners would show up there,’ he told the new Sky News documentary What Really Happened in Wuhan.

The whistleblower claimed he had heard of the Chinese government carrying out an ‘unusual exercise’ during the games.

‘[I knew] of the possibility of the Chinese government using some strange weapons, including biological weapons, because I knew they were doing experiments of that sort,’ he said.

His claims were supported by the former Principal China Adviser to the US State Department Miles Yu.

He said French, German and American athletes were among those to fall ill at the tournament with Covid-like symptoms, but were never tested for the virus.

Finally, a 2018 grant proposal has surfaced showing that Wuhan scientists planned to release enhanced airborne coronaviruses into the Chinese bat populations. Ostensibly, to inoculate them against diseases that could jump to humans.

Papers, confirmed as genuine by a former member of the Trump administration, show they were hoping to introduce “human-specific cleavage sites” to bat coronaviruses which would make it easier for the virus to enter human cells.

The bid was made by British zoologist Peter Daszak of EcoHealth Alliance, the US-based organization, which has worked closely with the Wuhan Institute of Virology (WIV) researching bat coronaviruses. Researchers included Dr. Shi Zhengli, the WIV scientist dubbed “bat woman.” Daszak, you may recall, was the instigator behind the original Lancet letter condemning anyone who questioned the natural origin assertions by “experts.”

The work involved injecting bioengineered bat coronaviruses collected by the Wuhan Institute of Virology into humanized and ‘batified’ mice. Surely, Daszak and anyone associated with funding, approving of, of conducting this research would likely have wanted to cover their tracks once the magnitude of the disaster became apparent.

Based on the timeline and the new facts, I surmise that the World Military Games was most likely a target of opportunity for China, as the nation was probably already dealing with the escaped virus. Given all of this new information, I would say that the “natural origin” has drawn exceedingly close to extinction.

I sure hope the scientists responsible for this catastrophe reflect upon all of these developments, which have condemned millions to death, illness, depression, learning delays, and COVID-confinement.

I quote Dr. Ian Malcom in “Jurassic Park”: …Your scientists were so preoccupied with whether or not they could, they didn’t stop to think if they should.

How I wish it was just China.
The evil is here at home too.

And his name begins with F.

Evil has so many names and so many faces, but you are right.
That individual is one of the top evildoers.

He’s the magician, using misdirection to keep the people’s attention away from what has actually happened.

Also, it’s no coincidence that Peter Daszak’s paw prints are all over this. The very person who wrote the now infamous letter to The Lancet denying the possibility of a lab origin for the virus may, in fact, be the person behind the genetic modifications (through gain of function processes) that give the virus its ability to infect humans. This guy is the locus of the entire affair and F. is his good buddy.

Fauci is a mass murderer.

Collaborators in the USA funded the Wuhan Institute of Virology. Peter Daszak is on video saying the NIAC funded these studies of BAT CORONA VIRUSES while he was on a panel discussion with Anthony Fauci. Please note they also received funding from the Google Foundation.

Are you serious Leslie? “I sure hope the scientists responsible for this catastrophe reflect upon all of these developments, which have condemned millions to death, illness, depression, learning delays, and COVID-confinement.”

A reflection? How about a trial and execution for what these scientists have done? They wanted to play God and they played Satan. Time for the argument to turn solely on why and who released this!

The biggest genocide to date in the 21st century. On par with the worst of the 20th century.

It is time for the covid narrative to change. These scientists need to be answer what did they know, what did they do and why did they cover up their crimes against humanity!

The incredulity of the stupid, moronic, idiotic, naive and dim-witted Dhimmi-crats, is astounding. To believe that the U.S.’s foreign enemies are not closely observing our domestic political affairs — in this case, the Dhimmi-crats’ and the media’s ceaseless, vicious and lawless sabotage/subversion/slander campaign against then-candidate, and, eventual President, Trump, from year 2016 through 2020 — and pondering how they can take advantage of the situation, is simply exceptionally naive and foolish.

Contemplate how utterly masterful the Chinese communists’ totally transparent manipulation of Trump-hating Dhimmi-crats, subversives and their media allies has been. A true master class in political manipulation. The Chinese have played these Dhimmi-crat suckers (Milley and others) like a well-tuned fiddle.

First, the Chinese communists release their Wuhan virus bioweapon at the end of year 2019, or, in early 2020, right at the beginning of an election year in which they know full-well that President Trump is cruising to an easy re-election. Then, after having created conditions for the Trump-hating Dhimmi-crats and their media allies to exploit the situation by inflicting the maximum panic and economic pain, possible, the Chinese generals call well-known Trump-haters and subversives, such as the vile, narcissistic, back-stabber, Milley, feigning to ask for “reassurances” about the very President that they are actively sabotaging, with their Wuhan virus!

This is a diabolically brilliant plot — give the Chinese communists some credit. The idiot Dhimmi-crats played the gullible suckers, in this con game.

And, the U.S. stupidly and naively funded the Chinese communists’ bioweapon research, through the naive cooperation of dim-witted, narcissist-bureaucrat, Fraudci, and, the NIH.

But, to our intelligence agencies, the evidence regarding the transparently malicious origins of the Wuhan virus bioweapon is allegedly “inconclusive.” What a bunch of utterly worthless, Dhimmi-crat partisans we have staffing CIA, NSA, FBI, etc. They’re suppressing evidence of a Chinese attack against the U.S., because to concede such a fact would help President Trump.

the one thing I have yet to see is who in the US authorized the funding of the research, Fauci isn’t hight enough in the food chain to do it.

Yes, he is. Congress may allocate “X” amount of money to an agency, and may even earmark it for “research,” but agency directors have the authority to direct the money to particular projects. It certainly takes nobody higher than Fauci to do so, and I wouldn’t be surprised if it can be done by someone lower in the chain of command. I work in government and know that who I go to get funds released depends on how much is being spent. So how high up the chain a proposal must go is almost certainly linked to the size of the outlay. Note that this does not mean that any given funding is always authorized by the lowest person on the totem pole able to give an approval. Even if someone lower than Fauci could have approved it, that doesn’t mean Fauci didn’t approve it.

Dr Frankenstein just admitted that he did fund the research but in his usual flip-floppy style, obfuscated his way through tortuous reasoning to claim success because the WuFlu created a need for “life-saving vaccines” which he is now claiming credit for. Wow. This guy has no moral compass at all.

. . . I would say that the “natural origin” has drawn exceedingly close to extinction.

I would say that the “natural origins” narrative is well and truly dead. But then anyone with any intelligence knew that is was all just a desperate cover-up attempt by those involved in the creation of the SARS-CoV-2 virus. And like most all cover-ups this one has failed.

Peter Daszak was the author of The Lancet letter condemning the lab leak theory.
Criminals always return to the scene of the crime.

If they could have introduced this in bats (the intent) this would be a different story.

Don’t give the goons any ideas! Their *think tanks” work overtime as it is….

The only real unknown left is whether or not the release was an accident accident or an on-purpose ‘accident’.

I have to wonder if this is “level two” of the “insurance policy” we heard about in 2016?
Level one is media manipulation and ballot buggery.

Fauci will be the sacrificial lamb.
Mark my words.

A probable…. plausible vaccine (for a highly unstable virus), a premature exit, and immigration reform without borders. Pandemic. Demos-cracy is aborted in darkness.

Bill Gates, who has spent billions of dollars researching blood borne diseases like malaria and HIV contacts his people to do gain of function research on an aerosol spread blood born disease. Fauci arranges for this research to be done in China, since it is illegal in the United States.

At this point the details matter as to how the virus was released. Both governments are complicit

“A whistleblower has sensationally claimed China deliberately spread Covid at a military tournament two months before the rest of the world knew about the deadly virus.”

“He said French, German and American athletes were among those to fall ill at the tournament with Covid-like symptoms, but were never tested for the virus.”

Well, “what virus?” Right? It was entirely unknown then.