Biden is so much worse than Obama. EVERYTHING is partisan with him. If military advisory boards and the national arts council are partisan then even the most serious matter will be partisan to him. 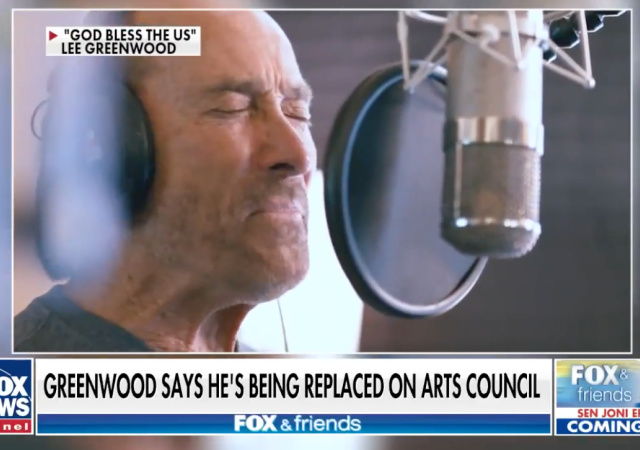 We learned a few days ago that Biden removed Lee Greenwood, the artist behind “God Bless the U.S.A.,” from the National Arts Council.

Greenwood told Fox & Friends that Biden’s administration alerted him via email. Not a phone call or letter. An email.

Of course, President Donald Trump reappointed Greenwood as well. He also plays “God Bless the U.S.A.” at many of his rallies.

But come on. Obama even reappointed him.

“It’s meant for all people, not just for a particular political party,” Greenwood said about his song.

It’s true. Only a moron would think it’s a conservative and Republican song. But since it has connections to ORANGE MAN BAD then we must get rid of Greenwood and his song!

Greenwood does so much for veterans and the military. He has a televised show coming up on October 12 in Huntsville, AL:

We always honor our veterans and want to particularly point out the fact we have this amazing show coming up October 12th in Huntsville, Alabama at the Bronze Center and set aside a lock of tickets which I do at most of our events.

This is a very special television production and more importantly we want to make sure that veterans and their caregivers can come to our performance. It’s going to be star-studded with 40 different singers singing the 40 years of hits that we have had. So, if your listeners will go to our website LeeGreenwood.com and adopt a vet. For $100 you can put a vet and caregiver in a seat to watch this amazing television production.

Kellyanne Conway lashed out at Biden over the announcement. She said she would not resign.

Former press secretary Sean Spicer demolished now-press secretary Jen Psaki when she questioned his qualifications for sitting on the Board of Visitors to the U.S. Naval Academy:

“Don’t you dare ever minimize or question my service to this nation. You got it?” the Newsmax TV host railed on his show earlier this month. “This move has taken partisanship to a new level.”

“I’m a proud graduate of the U.S. Naval War College. I’ve done multiple tours, and politics has never entered into my service. I’ve served under five different presidents of both parties. When you’re wearing the uniform, you serve the commander in chief. We take an oath as officers to the Constitution, not to a party,” Spicer added.

OK, maybe you have a problem with someone like Conway serving on those boards. But Spicer? How about H.R. McMaster? Former Army Vice Chief Gen. Jack Keane? Does Biden have a legit reason for getting rid of former U.S. Army North commander Guy Swan III?

What’s next? Even Obama stayed away from breaking presidential norms or cutting ties with Bush’s appointments. I mean, it’s normal to change U.S. attorneys and other positions. But appointments like the boards and arts council are different.

Biden is supposed to be a seasoned politician, much more than Obama and Trump.

Biden’s handlers are incredibly petty and dangerous. If they’re going to be partisan about the boards and art council just imagine when it comes to a serious matter.

Who pisses on your back and tells you it’s raining.

What a petty vindictive little worm. Neo asked some weeks ago is these acts Sundowner or puppeteers, I can believe this is Sundowner himself ordering this.

Headline calls it a “petty move”. If not for petty moves, Sundowner would have no moves at all.

“Biden is supposed to be a seasoned politician, much more than Obama and Trump. That is why I think Biden is not running the show. He should be politically savvy. He should know what and what not to do. He should know the norms. Biden’s handlers are incredibly petty and dangerous.”

But they are precisely the reason Biden is *resident today, and the only way that could ever have happened. Actual politics would never have achieved that result.

I keep saying this but people don’t seem to be getting the message: Stop blaming that poor, senile old man for everything that happens! It’s unlikely that he has the slightest idea who serves on any given council. It’s unlikely he knows who has been removed.

If his staff (not counting the nurse/babysitters) gave him paperwork to sign, he signed it. If he could remember his name at the moment. They might have told him anything about what it was for. Or nothing. Who knows?

Stop absolving him of any responsibility

He knows enough that he wouldn’t be doing anything but be a puppet.

That was the deal…

And he took it.

He knows he didn’t win and he doesn’t care

True. Biden knows what he’s doing. He’s as guilty as his handlers and extortionists.

“I don’t know what I’m signing…?”
(Followed, terrifyingly, by, “Take this to the President.”)
https://www.youtube.com/watch?v=Tj3zxBeVl1M

If aliens from a UFO came to the white house and said, “Take me to your leader,” who would they take them to?

Every single one of those people look like schmucks (and schmuckettes) with those idiotic masks.

No, he didn’t make a deal. Maybe Jilly made the deal and told him it was his idea, or something. Biden isn’t there. Ignore him.

Biden has often acted in anger and has always seemed the vindictive sort. I would not be surprised if he was behind these firings.

Each day that passes, each time Comrade Biden needs to prove he’s a ‘tough guy’, provides further evidence he is the authoritarian totalitarian wannabe dictator the American Marxists told everyone Trump was for over four years.

To make it worse, President Dunning-Kruger is a moron. Possibly the stupidest president we’ve ever had.

And his advancing dementia will amplify all of that. Where in the world will he end up starting a new war to distract from his domestic failures and plummeting approval ratings?

Which, BTW, would also make his neocon neverTrump war-mongering supporters ever so happy.

Dunning-Kruger was his malady 8 years ago.

Today, he is just a senile dolt that has ZERO say in whatever paperwork crosses his desk.

I’d ask your question in a more blunt manner: Where will our best be sent to die, and ultimately lose, this time?

Rumor has it that this guy not only sings songs praising the U.S. — by itself, totally verboten and unforgivable conduct, according to Dhimmi-crat orthodoxies — he’s also spent time whipping Haitian illegal aliens, at the border.

Calm down. The vacancy is being filled by that world famous artist, Hunter Biden.

Hunter is very talented. He can smoke crack and walk at the same time. Sometimes he hums as he snorts cocaine.

And he can do it in his shorts after an all-nighter.

On Day 1 of the Biden administration the President set to reverse, cancel or undo ANYTHING put in place by Trump, no matter how small. They could not undo these things fast enough.

The president and his people insisted that Trump’s pull-out deadline of 9/1/2021 was hard and fast, Unchangeable. Carved in stone.

The Biden Administration had 7 months to change that plan. Is there any evidence that anyone in power made an attempt to change Trump’s plan?

Of course it’s a conservative song. It has two things the hard-left hates:

Clearly no ear for music.

Meh. The d/progressive and the media are only interested in maintaining norms and traditions when their side is getting the short end. Let’s say DJT is elected. The 1st term taught him a number of valuable lessons regarding maintaining norms by deferring to ‘DC’ culture in refraining from replacing folks who are in nonpartisan positions. IMO, neither DJT nor any other r elected to the WH in 2024 is going to worry about norms any more than the Biden admin does. They will reap what they have sown. Hurt feelings and false outrage be damned.