Breaking from ‘Presidential Norms’, Biden Demands of Trump’s Military Board Appointees Resign or Be Dismissed

Breaking from ‘Presidential Norms’, Biden Demands of Trump’s Military Board Appointees Resign or Be Dismissed 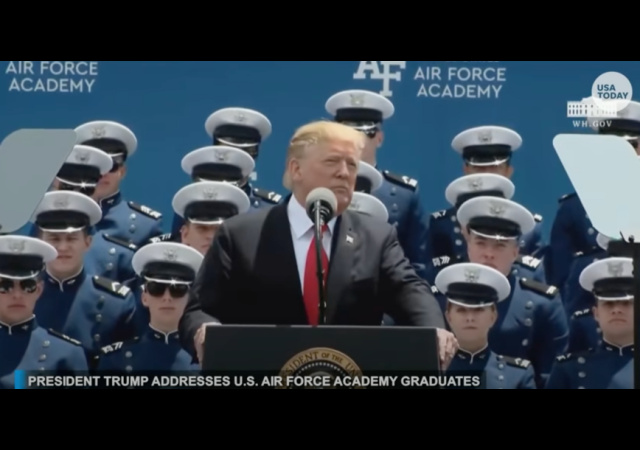 The Biden administration has asked 12 officials appointed to military service academy advisory boards by former President Donald Trump to resign or be dismissed.

White House press secretary Jen Psaki on Wednesday afternoon confirmed the request had been made.

Psaki added: “I will let others evaluate whether they think Kellyanne Conway and Sean Spicer and others were qualified, or not political, to serve on these boards, but the President’s qualification requirements are not your party registration, they are whether you’re qualified to serve and whether you’re aligned with the values of this administration.”

This move breaks from the tradition of appointees from previous administrations being allowed to serve all three years of their appointments to the military service academies.

The boards of the Military Academy at West Point, Naval Academy in Annapolis and Air Force Academy in Colorado Springs are made up of a mix of lawmakers and presidential appointees who traditionally meet several times a year to provide non-binding advice on issues like curriculum, student morale and institution needs.

Non-lawmaker members typically serve three-year terms, even across presidential administrations. Several members appointed by President Barack Obama at the end of his term served several years into the Trump administration, including Sue Fulton, President Joe Biden’s nominee for Assistant Secretary for Manpower and Reserve Affairs at the Pentagon, who served on the West Point panel.

Kellyanne Conway, one of Trump’s most effective advisors, stressed that she had no intention of resigning.

Kellyanne Conway hit back at President Biden on Wednesday after he demanded her resignation from a military service academy advisory board, saying: ‘I’m not resigning but you should.’

…Conway said she would not be resigning from the Board of Visitors to the Air Force Academy and accused Biden of trying to distract from political crises that were engulfing his administration.

She said his request was a break from presidential norms.

‘It certainly seems petty and political, if not personal,’ she wrote in a letter posted on Twitter.

‘The result is that faithful and willing public servants will be discouraged or thwarted from service.

‘Our service academies risk being further politicized and polarized.’

Conway also made an alternative suggestion to Biden, which many of us hope he will follow.

President Biden, I'm not resigning, but you should. pic.twitter.com/HuRYM4bLYP

It is hard to overstate the level of affection the non-elite members of the US military have for President Trump. This move will further erode morale among the men and women who serve. However, the action taken by Biden certainly fits into America-harming policies perfectly.

As a reminder, here is President Trump’s address to the US Air Force Academy in 2019. Trump then shook the hand of every cadet afterward.

Biden doesn’t seem to be achieving quite the same kind of response on campuses.

Probably shouldn’t say this but Biden is simply doing what Pres. Trump should have done. Removing all those people in the administrative branch that might not support him in his agenda. Of course, if Trump had done so the howls of outrage from the democrats would have been deafening. I expect no real reaction from republicans over this issue. They haven’t done anything to date and I hardly expect them to now.

They haven’t done anything to date and I hardly expect them to now.

Thus, the need of a new party. I really think, given the tenor of the times, that a new party IS viable. It has to start with local victories, then move on up. I don’t want to hear any of this “you are just wasting your votes!” stuff. Had that been said a long time ago, the Whigs would still be around.

It’s a good idea worth repeating, but, it was coopted by the Rove / Romney wing of the GOP.

The problem is that we’ve let the democrat party take over and as we’ve seen lately they will do anything, I repeat anything to keep that power. Lie? Yep. Cheat? Definitely. Steal? Nobody’s around to stop them. So yeah, a “new party” is a good idea. Right up to the time it may become a threat to the democrats. And then they’ll squash it flat in order to keep the power. Guaranteed.

Every right=wing reclamation movement that threatens to become successful is either destroyed or co-opted.

The root cause is that politics is a vocation of ruling others. It attracts sociopaths. The sociopath who flinches least from the most heinous corruption always wins.

Look at the Libertarian Party as a case study. In two out of the last three presidential races, they have tapped carpetbagger candidates who were entirely unlibertarian (in particular, gun-banner Bill Weld and drug-warrior Bob Barr) just for the name recognition they felt the party needed to “win.” And this is from the party whose motto is “The Party of Principle.”

This has become the standard practice for at least the last thirty-some years. When Democrats take power, they purge every corner of the bureaucracy and install their supporters to advance their policies. When Republicans win an election, they try to govern with a bureaucracy staffed by their enemies.

Actually, Trump should not have done what Biden is attempting.

No President has ever made such a blatant attempt to politicized the service academies.

That is what our focus should be on!

TY Leslie, but I have one bone to pick. Biden isn’t doing this.. he is just an avi.

I am glad that these advisors are kicking it back. Just another notch on the Biden stupid stick.

Yeah, it’s a break from norms and it sucks. But if we ever do take back the White House there needs to be a massacre of firing democrats in any of these positions and a great many of the top military brass need to be let go. We need to clean house.

Can’t have Trump people sitting on military academy boards….but Hunter is qualified for Burisma. I know it’s true, the man on TV said so.

Not really a surprise given Trump’s tendency to appoint political (loyalists) appointees as opposed to people who actually know what the hell they are doing.
I’d also suggest the idea that Trump was/is well respected in military circles is pure bullshit

Xi-den is a dim-witted, incompetent, narcissistic, corrupt and totalitarian disgrace, as is every single Dhimmi-crat who aids and supports this Chinese communist-installed cabal.

Meanwhile all we hear from the Franz von Papen Republicans is …. silence.

The von Papen Republicans seem to believe that the political pendulum will swing their way in 2022, so they don’t have to do anything and voters will sweep them back into power in Congress. I am convinced the opposite will happen: the GOP will lose seats in the US House and Senate due to a one-two punch of voting fraud and voter apathy.

What has the GOP done to prove they are a real opposition party and deserve to be in power? Weekly – sometimes daily – we are reminded of the deceit and duplicity of the von Papen Republicans as they scheme with their Communist slave masters to pass boondoggle “infrastructure” bills or rubber stamp Biden* nominees or heap praise on the murderer of Ashli Babbitt. This latest atrocity – the dreadful silence about the Biden* purge – only confirms my beliefs.

Another win for Trump

Obama’s endorsement is ALWAYS the kiss of death. Desperate times for these commies when the puppet master has to step in for his puppets.

I don’t see Newsome being recalled. The fraud is so outright obvious in California that nothing can be done. NOTHING.

Newsome will retain office, and the clean, well-dressed articulate black man will take credit for it. The clapping seals in the media will go along with it.

Of course Newsom will win the recall. It takes an awful lot for a person to vote against their own Party, and the governorship has national implications if the lame, ill, senile Dianne Feinstein dies afterward – as is likely. A vote to recall Newsom is a vote to flip the Senate to R. The national implications alone are enough to turn out Democrats in CA to vote no.

They also sent Lieawatha, and Biden is on his way.
Even the Mafia gives you only ONE kiss of death.

I like how leftists talk about “qualified people” and then create boards of people to oversee things they are totally unqualified to judge or critique, like citizen review boards for law enforcement. In Seattle, they are packed with advocates and political operatives instead of citizens who care about rule of law.

Noo Yawk’s state legislature is another example of the clueless writing law. Banning ICE-driven vehicles by 2035 or some such, with no idea where the electricity will come from in order to run them.

I full see a transition to electric vehicles in the next few decades as the techology takes hold, but the choke point is the environmental pressure groups blocking construction of new power plants.

A gun-banner for BATF.
A tree-spiker for BLM (Bureau of Land Management).
A mentally-ill zezirzem for undersecretary of health.
A social-justice warrior for DOD.
Kamala.

They should not resign, they should allow themselves to be fired with great fanfare.

I’m not sure they *can* be fired by the Executive branch. As far as I can tell, these are not political appointee positions, they’re politically *appointed* positions with set terms of office in an independent organization. They are not in the position of authority over the military, but strictly advisory, and therefore not under the “Congress supervises, approves appointees, etc…” routine that *real* appointees like the heads of agencies and various subordinate positions over the Civil Service.

For example, if the President decides a Civil Service employee needs to be fired, he can’t just require then to turn in a resignation or order the employee’s supervisor to fire them. CS are independent (hence the Obama regime’s attempt to ‘tunnel’ political appointees into CS positions to keep them from being rooted out after he left office.)

(Yes, I know these people are not Civil Service, but I needed an example)

Let the Biden administration go through the motions of firing, and look like the blithering fools they are when the attempt fails for lack of being able to do so.

If I could, I’d give you 100 upticks just for Austin alone. Talk about a trouble-making quota-hire!

Announcing this move, especially the way it’s being portrayed, is more than a distraction; it’s a politically charged and ridiculously lame attempt at changing the media narrative. They are desperate and need to find ways to change away from Afghanistan withdrawal, American citizens left behind, an escalating inflationary economy, southern border crisis, Joe’s dismal sagging poll numbers, and we can certainly add more negatives affecting this administration right now.

So the Sundowner administration is looking for Marxist to fill the US Air Force academy?