“We are always looking at more we can do to protect and save lives,” White House press secretary Jen Psaki said when asked if President Biden is considering additional measures like domestic air travel Wuhan virus vaccine mandates. 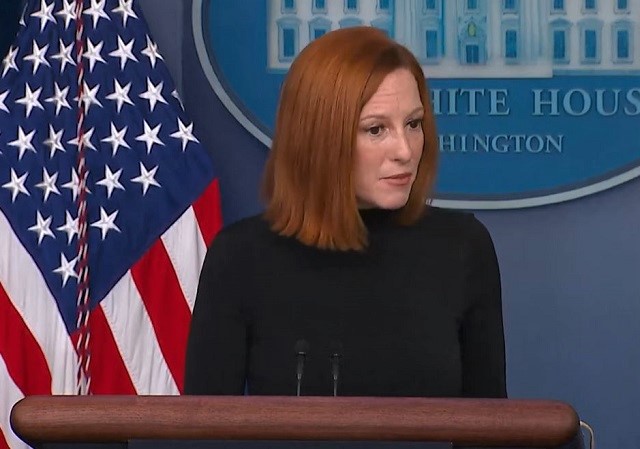 With all the finesse of a bull running loose in a china shop, President Joe Biden announced yesterday a sweeping–and what some on the right have described as an unconstitutional–plan to combat the Wuhan coronavirus, with the most controversial part being the mandating of the vaccine for businesses with over 100 employees.

As Mary observed in her write-up, Biden’s hostile speech confirmed Biden is a “full-on fascist,” with him at various points even threatening Republican governors like Florida’s Ron DeSantis and Texas’ Greg Abbott, not calling them out by name but nevertheless describing them as “bullies” and indicating he’d use his supposed presidential powers to “get them out of the way” if he found it necessary.

“…if these governors won’t help us beat the pandemic, I’ll use my power as President to get them out of the way,” Biden warned at one point while scolding unvaccinated Americans by saying that “our patience is wearing thin,” and alleging that “your refusal has cost all of us.”

Not surprisingly, some of Biden’s allies in the mainstream media implied during Friday’s White House press briefing that Biden should consider expanding the vaccine mandate beyond the parameters he announced during his speech, as exemplified by a question asked by CNN’s Kaitlin Collins of White House press secretary Jen Psaki.

Psaki responded by telling her that “We are always looking at more we can do to protect and save lives. Obviously, he made a significant and bold announcement yesterday, so I [don’t] have anything to predict or preview for you, but we’ll continue to look for ways to save more lives.”

The discerning reader will note that Psaki didn’t rule out the possibility of a domestic air travel vaccine mandate while at the same time she hinted that more was to come on the mandate front. Watch:

Psaki: "We're always looking at more we can do to protect and save lives." pic.twitter.com/xeXbK1fbEO

In response to a question from another reporter about why Biden didn’t implement the vaccine mandate sooner, Psaki said in so many words that what they’d done previously with mandates for federal workers and strongly encouraging businesses to put them in place were building blocks that led the White House to where they are now, insinuating this was part of the plan all along even though Biden, Psaki, and others have said in the past that the administration had no plans for a vaccine mandate:

NYT reporter Zolan Kanno-Youngs hits Psaki from the left, wondering why the vaccine mandates weren't "necessary" earlier "given the risk of the delta variant and hospitalizations and ultimately to save lives" b/c "this has been a concern for a while." pic.twitter.com/NGvJJF8KxN

“But there is an even bigger reason too, which I think we need to make it clear that there are privileges associated with being an American. That if you wish to have these privileges, you need to get vaccinated,” Wen proclaimed. “Travel, and having the right to travel in our state, it’s not a constitutional right, as far as I know, to board a plane, and so saying that you want to stay unvaccinated, that is your choice, but if you want to travel, you better go get that vaccine.”

Clearly, the idea is gaining momentum in certain Democrat circles. And while Psaki was non-committal Friday on the possibility, don’t be surprised if we see one implemented in the coming weeks as the Thanksgiving and Christmas holiday seasons and all the travel involved with them ramp up, all in an effort to “protect and save lives,” of course. At least that’s what the official explanation will be, anyway.

I am waiting for the line “more people die from Covid exposure on airlines than from 9-11”.

How about we circle around back to that – never.

Seems we could get into a civil right violation on this.

Haaaa that is funny. Guess they forgot who has not been vaxxed. We just need to say “SO”

Well, of course.
Air travel. The old standby.
The comfortable and well-established “root password to your rights.”
Bend over, spread ’em, and now show me your papers.

Oh, just a reminder – Johan Goldberg and George Bush voted for this fool.

The Bushes are charter members of the Democratic wing of the Republican Party.

Illegal border crossers do not fly on airlines. If they did The Regime might have to back off on that mandate.

The Regime’s plan is to scapegoat only white people, preferably white Trump supporters, who are not vaccinated and blame everything they can on them. Everything is on the table.

The Regime may soon consider requiring the unvaccinated to wear an identifying emblem on their clothing. So everyone knows to keep their distance. But only if they’re white, of course.

Obviously The Regime has not thought this plan through thoroughly yet. But that won’t stop them. Like when they decided to bug out of Afghanistan, they’ll just do it and make it up as they go.

Nothing new about that approach. It’s been SOP for socialists for over 100 years. They have the best of intentions and that’s all that matters. Right?

Wouldn’t surprise me if they tried … we’re 2500 miles from our main home presently and had hoped to leave the car here and fly back. Air, train, car – cost is approximately equal. We’ve done all 3 and prefer the train and car. Oh well – the hell with Biden.

Good a place as any to post the following – a new parody. Have fun with it at your next karaoke party:

Only 33% of black in Florida vaccinated. I guess they don’t even get to sit in the back of the airplane. We’re not going back to Jim Crow, I guess the democrats are going back to the slave code.

You can check out the copper tags that slaves were required to possess for travel off their plantations here:

“We are always looking at more we can do to protect and save lives”?

And yet when Texas passed legislation that does this very thing, the Biden maladministration launched a legal assault on the state.

Hypocrite thy name is Democrat.

Careful what you wish for. N Dakota has a 2nd confirmed Anthrax ‘outbreak’. I don’t know about the rest of you but I have had the entire seven shot series of Anthrax vaccination.

But in all fairness, the anthrax vaccinations actually WORK.

I know another country where travel is not a right but a privilege: North Korea.

I’m sure the totalitarian Ds admire the DPRK and consider them a role model as well.

The reality is that for all practical purposes there is no downside to being vaccinated thus it’s irresponsible not be vaccinated. You want to be vulnerable to covid fine, but stay the hell home.

Of course they are, nazis always ask for “Papers, please.”

Symptom suppression, high viral titers, a false sense of community safety… Will they be masked, too?

If they do it, I wonder what they’ll say when the virus continues to spread- via air travel. Because we know the vaccinated can spread it.
So other than for show, this is just a big power/control grab.

Well, we must remember that this would be “for the children…”

Remember that the courts have already decided air travel is not a right, back when they upheld the ID requirements and the No Fly List. There is a right to cross state lines, but not to do so by air.

How about choo choo train. Is there a No Rail List?

Boycott the airlines. Even if it means that you don’t see your family over the holidays. Better to miss them for a little while than to miss them forever because you are no longer permitted to cross state lines.

Nurses and hospital workers are forcing hospitals to shutter services. Truck drivers need to refuse to deliver to boys cities.

And people need to out the air lookout of business.

Translation: “We are always looking at more we can do to interfere and mess up lives,”

“Travel, and having the right to travel in our state, it’s not a constitutional right, as far as I know, to board a plane, and so saying that you want to stay unvaccinated, that is your choice, but if you want to travel, you better go get that vaccine.”

How do we get such constitutional illiterates in positions of power?

‘For all the great purposes for which the Federal government was formed, we are one people, with one common country. We are all citizens of the United States; and, as members of the same community, must have the right to pass and repass through every part of it without interruption, as freely as in our own States.’
See 6 Wall., at 48—49.