Illegal Alien Convicted of Murdering Mollie Tibbetts Sentenced To The Next Best Thing: Life With No Parole

Illegal Alien Convicted of Murdering Mollie Tibbetts Sentenced To The Next Best Thing: Life With No Parole 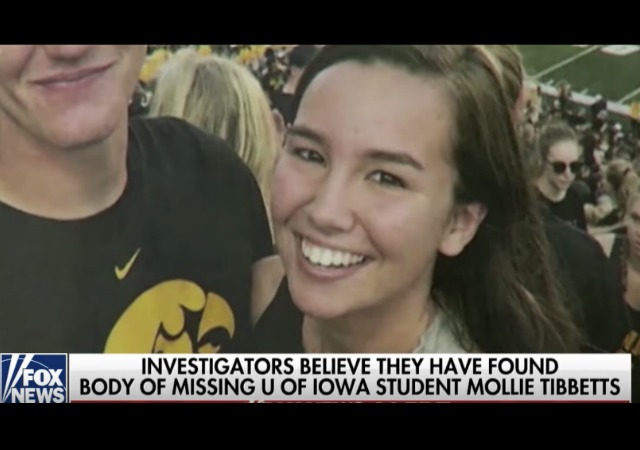 The disappearance and murder of 20-year-old college student Mollie Tibbetts made headlines when it was learned that an illegal alien, Cristhian Bahena Rivera, had abducted, raped, and gruesomely murdered the beautiful, promising psychology student and summer camp counselor.

Rivera stabbed Tibbetts in the chest and skull before dumping her body in an Iowa cornfield. He ludicrously claimed that two men forced him to do this, even as he admitted he was infuriated with Tibbetts for refusing his sexual advances.

Rivera, an illegal alien from Mexico, was arrested about a month after Tibbetts was reported missing.  At the time, he claimed that he became angry when Tibbetts rejected his advances (apparently made from his car as she was jogging along the road), and stated that he “blacked out” and initially “forgot “ that her dead body was in the trunk of his car.  He has been found guilty of first-degree murder.

. . . . In a bizarre turn of events, Rivera claimed that two men abducted him from his home and forced him to abduct Tibbetts. The two mystery men—Rivera reportedly never mentioned them to police—then killed Tibbetts and placed her in Rivera’s trunk before ordering him to dump her body in the cornfield, where Rivera later led police to her body.

Rivera has been sentenced to life in prison with no possibility of parole.

Judge Joel Yates delivered the sentence: life in prison without eligibility for parole.

The Tibbetts family watched in silence, a few visibly wiping their eyes, while Bahena [Rivera] gave no visible reaction as the sentence was read.

Pretty and such a bright future, what a waste.

It is also a waste of perfectly good air and taxpayer money to keep murderers in prison.

Why do taxpayers have to pay to feed and shelter this illegal murderer? Why can’t he be deported to serve time in his country’s prison (which is likely much less comfortable than a federal facility).

Because they wouldn’t want to feed and shelter him either. They’d likely just cut him loose.

It is also a waste of perfectly good air and taxpayer money to keep murderers in prison.

Yes, but the death penalty was abolished in the state of Iowa in 1965, And face it, the states that do have death penalties aren’t allowed to carry out the sentences as the courts are willing to suspend them for indefinite periods of time for whatever bogus reasons their lawyers come up with. So long in fact, most sentenced to the death penalty die of old age before it’s carried out.

In my state, we have the death penalty and are willing to execute it, but through some mysterious coincidence, the necessary chemicals and drugs are strangely “unavailable” from the out-of-state vendors.

Yes, it is a waste. Rivera could have run for Congress. He’s as qualified as anyone in the ‘Squad’.

OPEN THE BORDER
And Do Fewer – If Any – Background Checks

Yeah, this will end well.

I’d rather they incinerated this POS.

Put the guy in solitary. Push some “solitary loaf” through the door 3 times a day. Let him out to do his hour of exercise by himself without seeing anyone else. Give him a TV that only plays reruns of Barney the dinosaur. Give him a Bible as his only book.

The Father was willing to sacrificed his precious daughter for the WOKE agenda. Morally BROKE.

Who wants to be NEXT ?

Who is willing to sacrifice themselves or their daughters for Progressives Woke Open Borders ?

my god–if that’s true and were her brother, would have put the old man in the hospital

She was a self-hating white woman who actually tweeted she hated White People.

I’d say justice has been served in this case, twice over.

“The government is thoroughly corrupt and illegitimate and riddled with prosecutors that have been suborned by foreign nationals and we should totally give it the ability to execute people.”

Woke till You or Your Family Members are Raped

In Sweden muslim immigrants raped hundreds of women. The government told people it was the price of an open and tolerant society. Those who complained were shamed – the complainers were deemed to be the problem.

In the USA, Progressives view Mollie Tibbetts, and other victims, as the acceptable price to pay for their open border policy. Remember – they tell us all the time that we need illegal immigrants – “To Do The Jobs Americans Don’t Want To Do”. Yes – Progressives pretend to care about whether you get your lawn mowed or your trash collected.

So, let’s all thank Mollie and her family for being such Progressive patriots and so accommodating in advancing the Progressive Open Border agenda.

WHO WANTS TO BE THE NEXT ?
WHO IS READY TO SCARIFICE THEMSELVES OR THEIR FAMILY FOR THE PROGRESSIVE CAUSE ?

Any bets on how long until he is deported to Mexico and vanishes?

As long as he is not breathing when they do that I am cool with it.

Three hot meals of a place to sleep for the rest of his life. Some punishment!

Don’t give up hope Cristhian Bahena Rivera, as long as you’re breathing there is a chance a woke governor will decarcerate you so you can murder more co-eds!

I simply don’t believe ‘life without parole’ is any such thing anymore with Democrats running around.

Cuomo just pardoned a serial murder who was sentence to “Life Without Parole”.

Murder should be a ultimate capital offense, anything less is a affront to God IMO.