Food Network regrets giving Denny a platform because his views don’t align with the company. Thanks for letting us know your company’s values include infanticide. 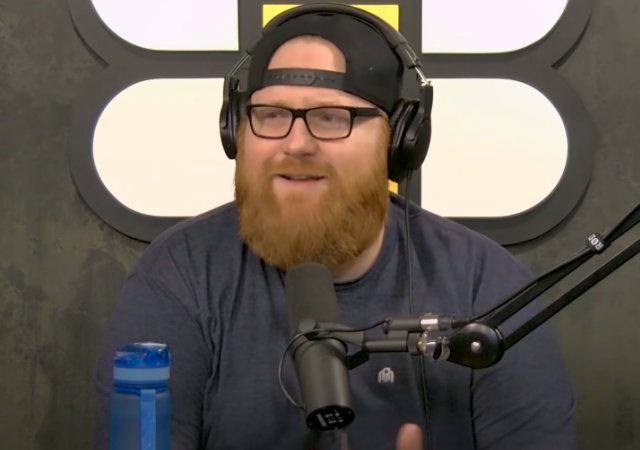 Josh Denny is a pro-life libertarian who hosted Food Network’s Ginormous Food in 24 episodes in 2017. Denny is also a comedian, which means some consider him controversial because wokeness or something.

Food Network decided to pull everything from the channel with Denny because of his tweets regarding the Texas heartbeat law.

For those asking: Our working relationship with Josh Denny ended years ago and we removed all episodes he hosted at that time. His views do not reflect our company values and we regret giving him a platform.

(Remember, I used to be an abortion fanatic. I was pro-abortion. I hated all restrictions on abortion. I’d say pro-choice but would be slightly annoyed if a woman chose adoption.)

Let’s see what caused the Food Network to make such a move. First off, Denny celebrated the Texas heartbeat law. It was glorious.

Calm down, broads. You still have six weeks to decide your life is more important than anyone else’s. https://t.co/3SvyGe8vbR

I personally think the 6 week grace period is too lenient.

It’s a half measure. How about no pre-meditated murder of anyone?

*I also think birth control should be free, and plan B should be part of every rape kit.

See how easy I fixed it?

I know that leftists don’t see it now, but this Abortion standard is how we get closer to a universal healthcare compromise.

We can’t begin to agree on the importance of health if we can’t agree that human life has value.

Let me tell you this. Your body does let you know you’re pregnant. Every mom I’ve asked said they knew, even with surprise pregnancies.

You are ending someone else’s life. Abortion stops the heartbeat of an unborn human being.

Second, Denny did not cave. He did not apologize. He did not back down when people brought up old tweets or called him names. But this should not surprise anyone because he has a history of sticking to his guns.

Some of the tweets are colorful, but hey. He’s a comedian.

“It’s not fair that only women have to shoulder the biological responsibility of carrying children.”

Oh, so NOW there are only two distinct genders? pic.twitter.com/sHvLUdi6cV

If you’re a liberal that’s mad about the new Texas abortion law, just think of it this way:

It will save way more black lives than any amount of police reform.

“Abortions effect no one else” – but a vaccine does?

Abortion, by definition, results in death 100% of the time.

Not getting vaccinated, doesn’t.

You could be more ass backwards. https://t.co/Dg4tdU5k2s

Women, if you don’t like legislation on your precious bodies, just stop having sex with men. Go on strike, and refuse to have sex with all of us until we change the law.

I mean, we’ll start fucking each other while you all starve to death, but your objection will be noted!

I think it started with killing babies, with some elusive morbid promise of a better future and life that is often left undelivered and inobtained.

And it ends with us blindly slaughtering each other execution style in a street because of un-shoveled snow.

I think everyone has horribly misunderstood me:

As long as the unborn babies are given AR-15’s to defend themselves, I’m fine with you going in there.

It’s gonna be a long day for that poor intern. https://t.co/zUNhtRocmO

Then Food Network caved. It’s nice to know their values include infanticide. But Denny took the avenue most celebrities avoid: He did not apologize.

If you regret having ever given me a platform, how about you send me a check for the 10’s of millions of dollars my show made for your network(s)?

You knew my views and my style of comedy when you hired me.

My views represent the beliefs of half of this country. https://t.co/Mg2mDl5fLP

Denny has always told “controversial” jokes. He has never changed. He has also made his political and social views known to everyone.

Denny’s tweets show nothing new about him. Food Network knew it when it hired him in 2017.

The Food Network and other companies always feign shock and surprise when people point out an employee or former employee’s old tweets or rants.

If you’re a comedian that’s never had the guts to say something controversial and stand behind it, your opinion is meaningless to me and I don’t respect you.

Ditto if you have a “limitation” on what can be joked about.

It’s not the first time Denny set off the left. In 2018, everyone exploded when he said that “straight white male” is this century’s n-word. Denny did not back down. He told The Red Pill host Van Lathan that people sent him death threats. He did not apologize.

Then Denny said the n-word numerous times on the podcast, but mainly when he retold old jokes from 2012. Those tweets spelled out the n-word and brought up Asian women.

Denny did not apologize. He described those tweets as “dark comedy.”

100 years ago the was known as social death. Time to cancel the cancelers.

Anyone who subscribes to cable TV or satellite TV or Apple TV is part of the problem.

Human rights are a gauche choice in the age of social and medical progress. Human life evolves until Her Choice or her Choice.

That said, there is no mystery in sex and conception. Four choices and still six weeks, thus the extreme braying of rape… rape-rape culture, systemic diversity (e.g. sexism), and other artifacts of strawclown apologies masquerading in strawman clothing. Baby steps.

The Food Network: “It’s not about food! That’s just our cover. Our real goal is something else.”

“I’ll be here all week. Tip your water, but don’t order the liver.”

So by extension, Food Network execs are just whores who never knew that they were pregnant when they took in all of the money he generated for them.

Best come-back since Norm MacDonald hosted SNL after being fired.

And dead to me.

I guess don’t mess with the left’s perceived right to murder the unborn on demand. Seems reasonable to me /sarc

Does Food Network require mandatory Wuflu vaccines as a condition to work for them?

I have noticed that some of the pro-abortion “my body my choice” types are also some of the loudest voices demanding everyone get the largely ineffective (not to mention potentially dangerous) Wuflu vaccine.

The conditional risk of infection and disease progression vs the absolute risk of the vaccine(s) from known knowns, unknown knowns, and and unknown unknowns detected after years of safety data in a high-powered experiment, this time, in progress in the general population, Assess your risk and proceed accordingly,

Who knew Food was so political ?

I never understand these companies that get involved in political or social controversy. It never ends well. Inevitably they piss off half the country.

“Who knew Food was so political ?”
My guess would be Marie Antoinette.

To the left, EVERYTHING is political.

Understand it’s not really political. It’s religious. Progressivism is a religion. And this sort of thing is their way of casting out the unclean. Progressives make the original Puritans blush.

Gosh, another network to avoid.
Thank you for being a voice for life Mr. Denny!

Not just for life, but a life lesson in why you never, never, ever apologize to the scum-sucking left. Standing up for your principles shows that you have some. I’d pay good money for live tickets to Josh Denny, or Ricky Gervais, or even Steven Crowder — who did in fact “apologize,” but in the most knee-slapping FU manner imaginable.

(I once made the mistake of paying good money for live tickets to Lily Tomlin. It was piteous, particularly the parts where she insisted on inserting Trump jokes, gratuitous political material that absolutely thudded with the deep-red audience out here. She truly didn’t understand why she wasn’t getting fist-pumps. Did she not realize she was in Arizona cowboy country? It was a total squirm-fest, like watching an autistic tot eat an entire onion, crying, and screaming “apple!” at it before every bite.)

Maybe “the revolution always eats its own” will be a show on the food network.

I hear Jeff Dahmer is available to host.

Well, from the grave (which is completely appropriate for the subject)

Maybe we should all get into communication with our congressmen about tax exemptions that this company gets and revoking them, followed by a discussion of why they pay the lowest corporate tax rate in the developed world but unsatisfied by that desire to run our private lives?

If their channel were any good, people would only watch for five minutes, get hungry, and go to the kitchen, or to the supermarket, or out to a restaurant.

Until I saw this here at LI, I had no idea who Josh Denny was (yes, I don’t pay much attention to Hollywierd anymore). I like the cut of that man’s jib. Nothing controversial in anything Mary included in her post, from my perspective. But Denny’s backbone is the best part.

Some of his jokes are really crude.. but that’s fine.. guy humor…. I laughed when I read them on twitter. Laughter is a weapon against evil..of sorts. TY Mary, great summary.

Sigh. Well, I guess it’s time to leave TV altogether. I end up watching nothing but reruns of old shows anyway. So sick of the WokeScolds.

If you’re a tv network that specializes in food preparation shows, and you’re firing people over their politics, you’re doing ‘food network’ wrong.

Notice that they’re dissociating from him not because of something he said on any of their programs — where they do have a right to control the content — but because of things he tweeted after their “working relationship” with him ended years ago.

I.e., they’re not firing him, they’re just trying to avoid getting hassled by the Woke Inquisition. Or maybe they’re Woke themselves. Either way, it’s despicable,