The new movement comes as “intensity of opposition to the president is also on the rise, while strong approval has dropped.” 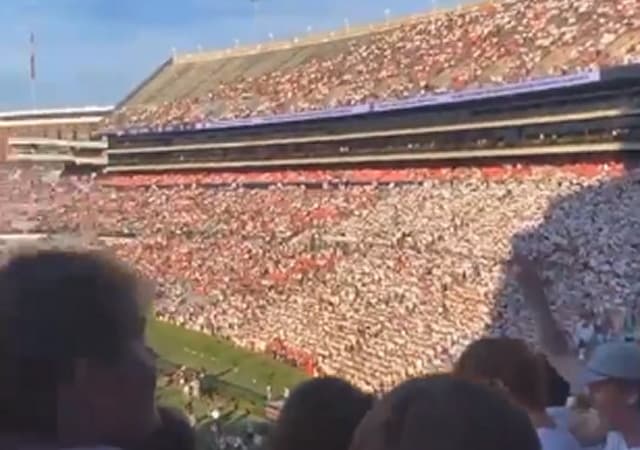 An interesting trend is forming at college sporting events. Crowds of students are chanting ‘F**k Joe Biden’ at schools all over the country.

This does not bode well for Biden’s presidency, especially when it has only been eight months.

Explicit chants against President Joe Biden broke out in the crowds at college football games over the past few days.

On Sunday, video of a “f**k Joe Biden” chant was posted online during the Texas A&M Aggies game against the Kent State Golden Flashes.

The video was shared by “the-typical-liberal” Instagram account, a meme page run by conservative Grant Godwin which has more than 2.4 million followers.

“F*** Joe Biden!” Chants at the Texas A&M game—Let this be a new trend at all college football games!” Godwin wrote.

As noted by the Old Row Sports Twitter account, this was at least the fourth instance in recent days in which the chant was sung at college football games.

The same chant was also sung by a small section of the crowd at the Coastal Carolina Chanticleers game against the Citadel Bulldogs on Thursday, September 2, as well as the Virginia Tech match against UNC the next evening.

A third FUCK JOE BIDEN 🗣 chant from this weekend 😂😂😂 this time at Auburn @OldrowAuburn pic.twitter.com/mBGA64FUwA

Another FUCK JOE BIDEN 🗣 chant, in liberal Austin of all places! pic.twitter.com/gbPaE43Tda

Another FUCK JOE BIDEN 🗣 chant, this time at the Virginia Tech game

This weekend tens of thousands of people chanted “FU*K JOE BIDEN” at dozens of events across the country.

Joe Biden has become synonymous with “The Establishment” that destroys all joy in life. It is punk rock to fight against Joe.

This is a good trend pic.twitter.com/nQneU5KDpZ

The American people are very forgiving, but what we have seen unfold in Afghanistan, coupled with the continued issues around COVID and its effect on the economy and schools, has created a perfect storm around Biden.

But, what should be more worrisome for Biden (and Democrats overall), is that the intensity of opposition to the president is also on the rise, while strong approval has dropped…

Are you feeling the unity yet?

Ah, if only there was a legal way to reinstate Trump.

There is. In another three and a half years.

Assuming we survive until then.

It’ll be Harris by then.

I get it … but we can do better than Trump …

When asked how he felt about people chanting this at campuses across the country, Joe Biden said, “I”m supposed to stop and walk out of the room.”

Those crowds in stadiums can be multiplied by millions in living rooms across the country.

Unfortunately we still have massive voting by mail and ballot harvesting. Unless those are monitored and restricted the voting fraud problem will only grow.

Setting aside ballot fraud: the GOP leadership tends to be an unlovely bunch. It is hard to work up the enthusiasm required to crawl over broken glass to vote for Republicans when the end result is Speaker McCarthy and Majority Leader McConnell.

Amazingly, the RNC called me last night and asked if I support the MAGA movement that President Trump started. I said I do not support the RNC. They “understand” my frustration, and asked the question again. This time I said the RNC had a chance to make a difference and support our President, they did not therefore, my wallet is closed to any RNC initiative.

I SO miss the 60s. All of this crude language today!

The youngsters have never heard that chant. It would be a great alternative, as it would get more play simply for not having an F-bomb in it.

Every effing thing has an effing f-bomb in effing it. I effing find it effing ah-effing-noying!

Which brings up a point.

Is there no effing B?

“Hey! Hey! Joe Bidet! How many jobs did you flush today?”

When Harris takes over, will the chants be:

When Joe asked a staffer, “What are they saying?” The staffer replied, “They’re saying LOVE Joe Biden!”

Perhaps this is not meant as an insult, but as the fondest desire for those chanting. Modern metrosexual men may wish to be dominated by the ice cream licking, aviator bespectacled avuncular figure. Addlepated, leftist young women may be enthralled by his power. Yes, these two traditional gender categories are crying out for sexual congress with our president.

On Sunday, video of a “f**k Joe Biden” chant was posted online during the Texas A&M Aggies game against the Kent State Golden Flashes.

Not surprising. The TAMU administration – which pride itself as being more-Commie-than-thou – is having a conniption. My inside sources say they are threatening to investigate and suspend or expel students, etc.

I have never had the slightest urge to attend a live athletic performance (unless, of course, family were on the field). Now I am torn by the feeling that there is something existentially cultural that I am missing out on.

And these are COLLEGE STUDENTS. Not exactly known to be the most conservative bunch.

It would be nice to think the students had seen the light, but in all likelihood, they are just pissed that the student loan forgiveness seems to have disappeared.

Dating myself here, but I have always really liked:

Don’t change dicks in the middle of a screw. Vote for Nixon in ‘72.

Mom always said not to Date Yourself… you’ll go blind…