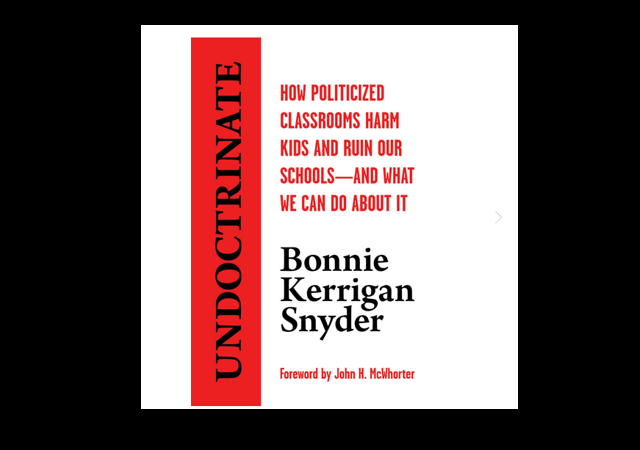 Legal Insurrection is on the front lines of the battle against the spread of Critical Race Theory in classrooms across the country.

As parents begin organizing to stop the political and social justice indoctrination of their children in both public and private schools, they will need tools and resources to organize effectively. Legal Insurrection founded and runs CriticalRace.org, and others are also developing effective support systems.

The Foundation for Individual Rights in Education (FIRE) High School Outreach Fellow, Bonnie Kerrigan Snyder, has written a book that is an exceptional resource for concerned parents who are planning to confront local school boards and perhaps take them over: Undoctrinate: How Politicized Classrooms Harm Kids and Ruin Our Schools―and What We Can Do About It.  Here is Simon & Schuster’s page on the book if you prefer not to use Amazon.

Snyder has over two decades of experience at the high school and college level (as teacher, guidance counselor, professor and administrator at both private and public universities). Her book, which includes a compendium of stories, examples, and legal cases involving students and parents who challenged the activism-based instruction being thrust upon them at all levels of the educational system, is written with a lot of heart.

Snyder’s compassion for both students and their families shines throughout the extremely engaging and informative material. Undoctrinate is divided into four parts: The Problem in Our Schools, How We Got Here, Why It’s Bad, and What to Do about It. Each chapter is a clear, persuasive case highlighting the challenges and suggesting potential solutions.

There are so many solid and insightful passages in Undoctrinate that selecting one to share was difficult. One of the many sections that drew my attention was “Missing Voices in the Classroom.”

Many of the educational problems detailed in this book stem from a lack of balance, and steeply tilted one-sidedness. We’re seeing this with the hyper-domination of one similar strain of thought in the education schools and with the supermajoritarian agreement found in teachers’ unions. Without balance, without hearing from or representation from the other side, something essential is missing, the conversation becomes a monologue, potentially dissenting voices are chilled into stony silence, and distortion grows.

Our classrooms are occupied by roughly equal numbers of male and female students, but what is the gender representation like among the faculty? Teaching and nursing have long been conceived of as “female” professions—the only acceptable ones beyond homemaking. At least, they were before so-called “women’s liberation,” which presumably freed women from the restrictive limitations of traditional roles and empowered them to pursue careers in any field of their choosing.

How has this panned out? Despite lowered barriers and expanding opportunities elsewhere, the teaching ranks have grown even more female in recent years. While the number of male nurses has tripled since the 1970s, the number of male teachers has not shown similar increases. According to a study led by University of Pennsylvania Professor Richard Ingersoll, the gender imbalance in education has increased from 67 percent female in 1980–1981 to 76 percent female by 2016—more than three out of four.124 This means that male teachers are now underrepresented by a whopping 50 plus percent, relative to their proportion of the overall population.

Undoctrinate avoids being a histrionic, divisive screed that could be insulting to independent and left-leaning parents who are looking for guidance in dealing with anti-American, racialist distortions being offered up by some teachers and administrators. Snyder’s book is also not a regurgitation of blog posts, clipped together and presented as new material.

And while the main body of the book is excellent, it is perhaps the appendices that are the most important part of Undoctrinate. There is a list of the “5 Warning Signs” Snyder has developed and a “School Indoctrination Survey” that will help parents assess their children’s classrooms and schools.

I give Undoctrinate 6 stars out of 5: The extra star is for Snyder providing useful tools and information as part of this book, instead of merely offering complaints and criticisms. I recommend that any student, parent, or citizen who has concerns about classrooms, schools, or districts order a copy.

There is also an Undoctrinate website, with a great deal of resource material.

Finally, here is a “So to Speak” podcast interview with Snyder.

“left-leaning parents who are looking for guidance in dealing with anti-American, racialist distortions being offered up by some teachers and administrators”

Quick, somebody scream “racist” at them and get them back into line!

Thanks for the review. This book looks like a very useful resource.

Having children gone through K-12, recently, I fought this indoctrination for 13 years. It’s a daunting task. One of the strongest human instincts is to be accepted, so most teachers, administrators, corporate officers, media professionals align their thinking to the left-effeminate views. Parents in a few conservative school districts can change this, but nationally, the majority of parents of school children are now non-white who really have no interest in our free market, our culture, or anything tainted by old America. In California, 22.4% of the school children are non-Hispanic white. These and most parents have no interest in changing it. The demographics have changed. This nation is decades past the stage where this could be turned around.