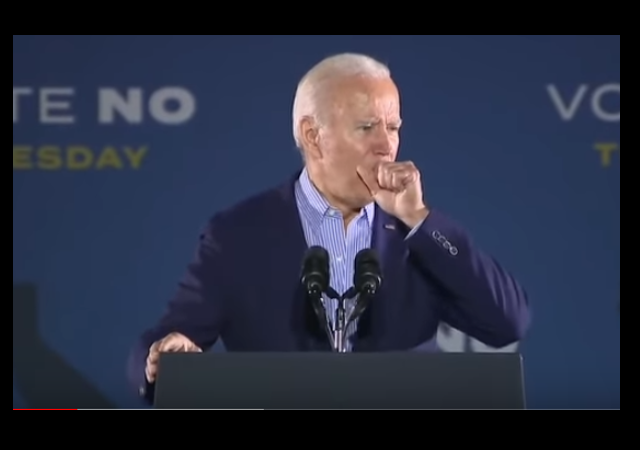 There are a few recent incidents to record as we witness Biden’s slow and steady decline in mental acuity and physical stamina.

To begin with, during Biden’s rally for California Gov. Gavin Newsom, there were several significant episodes of coughing. Furthermore, there with the similar episodes of hacking during his recent tax proposal speech.

…Biden was slammed on Thursday for “hacking and gagging” in his tax speech as White House press secretary Jen Psaki dodged questions over his health.

Biden was interrupted with coughs as he delivered his remarks on the United States economy and blasted wealthy Americans and big corporations for not paying taxes.

His speech started out with a few coughs, as Biden excused himself and appeared to clear his throat.

Despite the occasional tickle in his throat, Biden continued on with his economy speech for approximately 23 minutes.

….It didn’t take long for Twitter users to criticize the president and use the hashtag #Bidencough.

“Biden coughing, gagging and phlegm gurgling is making me ill. Every television speech full of this. Give the man water PLEASE,” one social media user tweeted.

Another wrote in all capital letters: “#BIDENCOUGH INTENSIFIES.”

Biden coughing,gagging and phlegm gurgling is making me ill. 🤢 Every television speech full of this. Give the man water PLEASE. #BidenPhlegm #BidenCough #BidenNeedsWater

In a surprise move, the White House spokesperson was asked about Biden’s health.

Her response? Basically, “Nothing to see here“.

“Many of us were in the East Room watching the president, we’ve seen him on many occasions where he had a repeated cough. What is the situation with that cough and is it a concern?” asked NBC News’ Kelly O’Donnell.

“We have a doctor who travels with him, obviously who checks in if it is ever warranted, and certainly that continues to be the case, as it has been since the beginning of his presidency,” she added.

“Is there an explanation for why he coughs so frequently in situations like that?” O’Donnell pressed.

“I don’t think it’s an issue of concern. I think there are a range of reasons why we may need to clear our throat or we may have a little light cold, and that’s certainly something that presidents, elected officials, reporters, spokespeople can confront,” Psaki responded, ignoring the frequency with which Biden’s public comments have been interrupted by his phlegmy delivery.

In terms of his mental abilities, it is being reported that Biden forgot Australian Prime Minister Scott Morrison’s name during the historic pact announcement.

Scott Morrison has been called many things, but “that fella down under” may be the one that stays with the Australian prime minister the longest.

It came as the US president, Joe Biden, announced a trilateral security partnership with Britain and Australia, called Aukus. It will see the US share nuclear technology that will help Australia create a multibillion-dollar fleet of nuclear-powered submarines.

…[L]ooking towards a TV screen on which Morrison was appearing via video link, Biden appeared to hesitate.

“And I want to thank that fella down under. Thank you very much pal,” Biden said. He added: “Appreciate it Mr prime minister.”

I guess we should be grateful Biden didn’t fall asleep.

One last point: If Biden were serious about COVID prevention, he would follow the Prime Directive of disease prevention – stay home when ill. If he can’t remember this basic rule, then one of is staff members should.

Jen Psaki is getting more and more unconvincing in her role as Jen Psaki.
I much prefer Martin Short’s portrayal of Jen Psaki from “Mars Attacks.”
Now that was authentic and convincing.